The hydrogen spectrum is a special type of electromagnetic radiation that has a very short wavelength. It is the most common form of light in the universe and it is extremely important to us. Hydrogen spectrum has been used to make gas lasers, which are very powerful and efficient tools for research and development. The hydrogen spectrum is a colorless, odorless, non-flammable gas. It is the simplest chemical element and the most abundant one in the Universe. We all know that electrons in an atom or molecule absorb energy and become excited, jump from a lower to a higher energy level, and emit radiation when they return to their original states. This phenomenon also explains the emission spectrum via hydrogen, also known as the hydrogen emission spectrum. In the late 1800s, it was discovered that when a gas is excited with an electric discharge and the light emitted is viewed through a diffraction grating, the spectrum observed consists of individual lines with well-defined wavelengths rather than a continuous band of light. Experiments revealed that the wavelengths of the lines matched the chemical element emitting the light. They were an atomic fingerprint created by the atom’s internal structure.

Bohr’s theory can be used to explain the origin of the spectral lines associated with hydrogen. The Hydrogen Atom is said to be stable when the electron in it begins to revolve around the nucleus in the first Orbit with the quantum number n=1. The ground state is referred to as this orbit. The given Electron absorbs energy from its surroundings, causing it to jump into higher orbits with the primary quantum number n= 2, 4, 4, 5… These higher orbits are referred to as the excited states. When electrons begin to revolve around these excited states, the Atom is said to become unstable.

The hydrogen spectrum is an important piece of evidence for demonstrating an atom’s quantized electronic structure. When an electric discharge is passed through a gaseous hydrogen molecule, the hydrogen atoms dissociate. It causes electromagnetic radiation to be emitted, which is initiated by energetically excited hydrogen atoms. Discrete frequency radiation makes up the hydrogen emission spectrum. The radiation series are named after the scientists who discovered them. When an atom absorbs a quantum of energy, it is said to be in an excited state in comparison to its resting (ground) state. Light is emitted when an excited atom returns to its ground state. The familiar red light of neon signs, for example, is caused by neon atoms that have been excited by an electrical discharge. When light from excited atoms is viewed through a spectroscope, images of the slit appear as a series of coloured lines along the instrument’s scale. The different colours correspond to light of specific wavelengths, and the series of lines is referred to as a line spectrum. Each element’s line spectrum is so distinctive that the spectrum can be used to identify the element.

The energy levels of the hydrogen atom, as well as some of the transitions between them that cause the spectral lines to appear, are depicted. 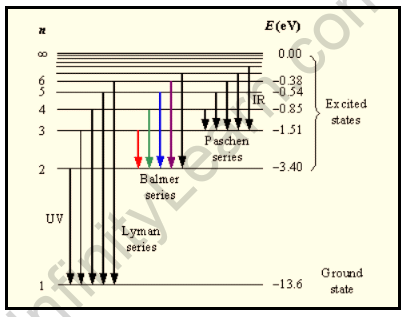 Balmer proposed the formula for correlating the wavenumber of the spectral lines emitted and the energy shells involved in 1885, based on experimental observations. This formula is as follows:

The Balmer series is the name given to this series of the hydrogen emission spectrum. This is the only set of lines in the electromagnetic spectrum that is visible. The value, 109,677cm-1, is known as the hydrogen Rydberg constant. The Balmer series is the part of the hydrogen emission spectrum that is responsible for exciting an electron from the second shell to any other shell. Other transitions have their own series names as well. Some of them are detailed below.

v denotes the wavenumber of electromagnetic radiation. The value 109,677cm-1 is known as the hydrogen Rydberg constant.

The Hydrogen Spectrum is described as an important piece of evidence for representing an atom’s quantized electronic structure. When an electric discharge is passed through the Molecule of gaseous Hydrogen, the Hydrogen Atoms dissociate. It also causes the emission of electromagnetic radiation, which is initiated by the energetically excited Hydrogen Atoms. The hydrogen Emission Spectrum consists of discrete frequency radiation. The scientists who discovered these Radiation series are named after them. 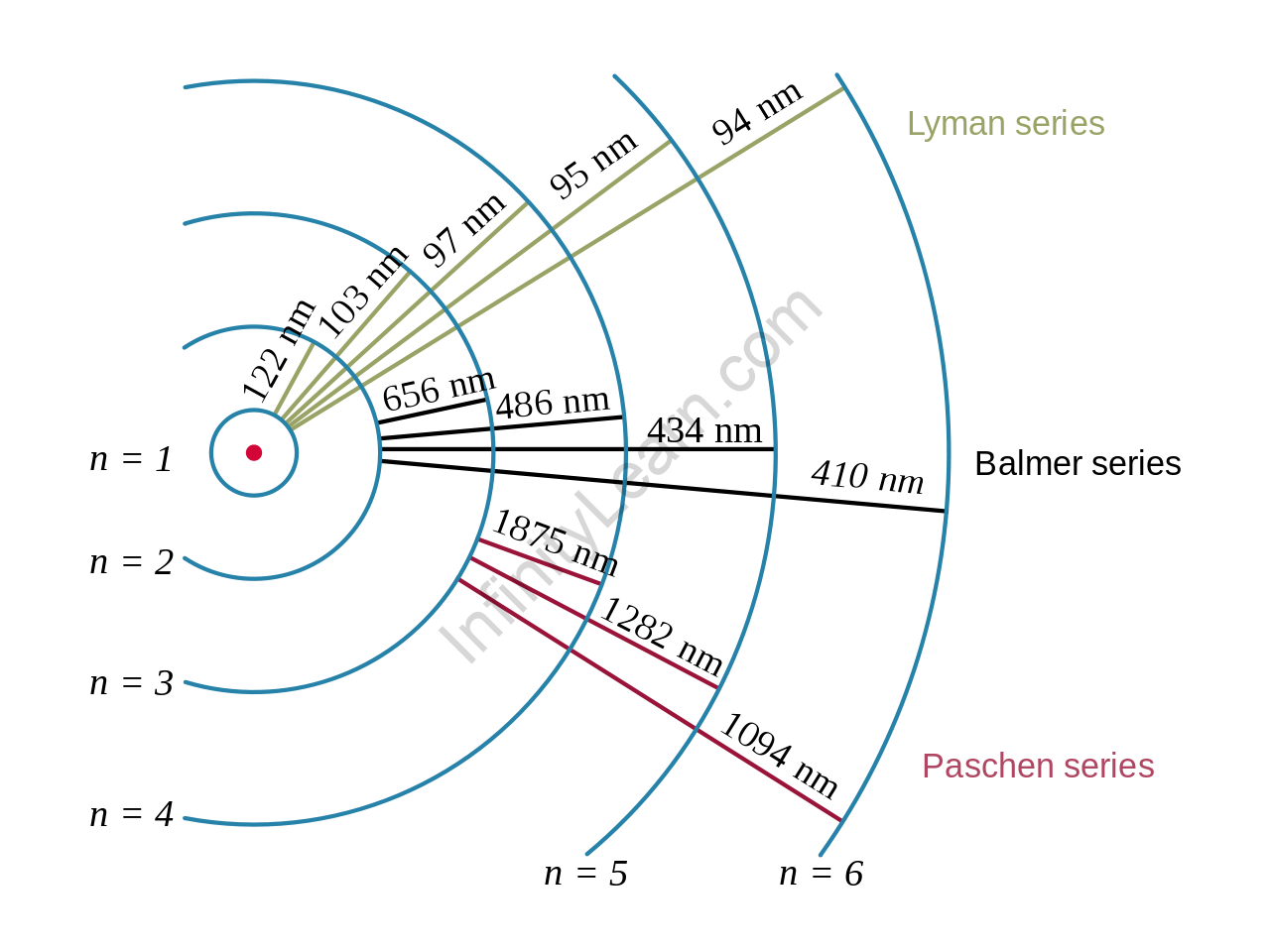 A hydrogen atom’s nucleus is orbited by an electron. The electromagnetic force between the electron and the nuclear proton causes the electron to enter a series of quantum states, each with its own energy. The Bohr model of the hydrogen atom depicted these states as distinct orbits around the nucleus. As shown in the figure, each energy level, electron shell, or orbit is denoted by an integer, n. The Bohr model was later replaced by quantum mechanics, in which the electron occupies an atomic orbital rather than an orbit, but the hydrogen atom’s allowed energy levels remained the same as in the earlier theory. The emission spectrum of atomic hydrogen can be divided into several spectral sequences, with wavelengths supplied using the Rydberg formula. These spectral lines are caused by electrons transitioning between the two energy levels in an atom.

The photoelectric effect provided irrefutable proof of the existence of the photon and, by extension, the particle-like behaviour of electromagnetic radiation. The photon concept, on the other hand, arose from experiments with thermal radiation, which is electromagnetic radiation emitted as a result of a source’s temperature and produces a continuous spectrum of energies. More direct evidence was required to confirm electromagnetic radiation’s quantized nature. This section describes how visible light experimentation provided this evidence. The atomic spectrum of hydrogen is a very important element in chemistry. It is the smallest unit of matter and the most common element in the universe. Hydrogen is also one of the most abundant elements, which means that it is a very important building block for all other elements.

Where did the Hydrogen Emission Spectrum Come From?

The hydrogen emission spectrum has a pattern in the form of a series of lines. And we can calculate the lines by using simple whole-number equations. The voltage in the tube, as we saw in the previous experiment, provides the energy for hydrogen molecules to break down (into hydrogen atoms).

Can we find the Hydrogen Ionisation Energy in the Emission Spectrum?

When there is no external Energy influence, hydrogen is in its ground state, according to the hydrogen emission spectrum definition (electron in the first shell or level). To ionise hydrogen, we must provide energy to allow electrons to move from the first level to infinity. Ionisation Energy is the measurement of the distance between the first and infinity levels. We can calculate the energy required for the first level to infinity by determining the frequency (point of Ionisation). We can calculate the Ionisation Energy based on this result.