Kinematics is the study of motion. The relationships between rotation angle, angular velocity, angular acceleration, and time are described by rotational motion kinematics. Torque is the ability of a force to alter the rotational speed of an object. The rotational equivalent of force is torque. The distance between the point of rotation (pivot point) and the location where force is applied is defined as the lever arm. Torque is maximized by applying a force perpendicular to the lever arm and as far away from the pivot point or fulcrum as possible. If the torque is zero, the angular acceleration is also zero.

When all parts of a rigid body move parallel to a fixed plane, the object is said to be in-plane motion. There are two types of plane motion, which are as follows:

Consider a rigid body that is performing only rotational motion (i.e., a rotational motion which has no translational component). It is possible to define an axis of rotation (which is assumed to pass through the body for simplicity)—this axis corresponds to the straight-line that is the locus of all points inside the body that remains stationary as the body rotates. A general point inside the body performs a circular motion that is centered on the rotation axis and oriented perpendicular to this axis.

The following assumes implicitly that the axis of rotation remains constant. 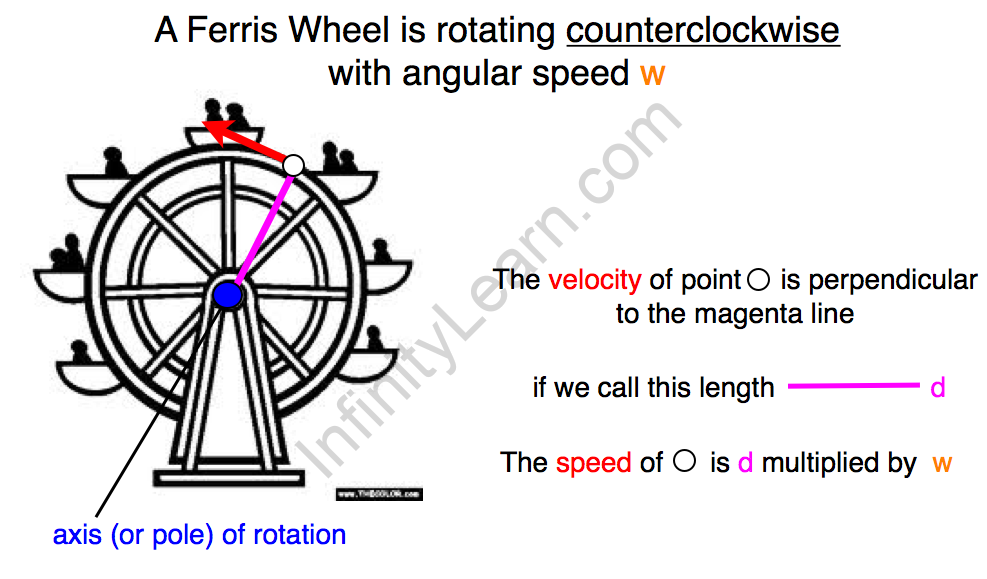 The units of angular acceleration are (rad/s)/s, or rad/s 2 .

The motion of the earth and other planets about their respective axes is an example of rotatory motion, as the name implies. The spinning of the celestial bodies about their axis is caused by inertia.

A spinning top is a toy with a pointed tip that is externally wrapped in thread. One of the best examples of rotatory motion is the movement of a spinning top. When the spinning top is placed on a surface with only its pointed end in contact with the ground and the thread is pulled with force, the top spins about its own axis until all of the top’s energy is consumed.

In our daily lives, we see examples of rotational motion.

Because rotational motion is more complicated than linear motion, only rigid body motion will be considered here. In contrast to the sun, which is a ball of gas, a rigid body is an object with a mass that holds a rigid shape, such as a phonograph turntable. Many of the equations for the mechanics of rotating objects are similar to linear motion equations.

Rotational motion is defined as the movement of an object in a fixed orbit around a circular path. It can also be defined as a body’s motion in which all of its particles move in a circular motion with a common angular velocity around a fixed point, such as the rotation of the Earth around its axis. An object’s rotation about a fixed point can occur in two directions: clockwise and anticlockwise. Rotational energy is the energy produced by this rotational motion. Torque, moment of inertia, angular momentum, and other important terms are associated with rotational motion.

Torque is the magnitude of force applied to a body away from the point of application of force. It is also known as the turning effect. It is easier, for example, to push a door open at its ends rather than at its hinges.

Moment of Inertia: This is a quantity that determines how much torque is required to rotate an object around its axis. It is also known as rotational inertia.

Angular momentum is the product of angular velocity and moment of inertia, and it determines the amount of rotation of the body.

What is Rotational Motion?

Rotational motion is defined as the movement of an object in a fixed orbit around a circular path.

What are the examples of rotational motion about a fixed axis?