A series of chemical reactions that occur in the cells of all aerobic organisms to release ATP-retained energy by converting Acetyl CoA into carbohydrates, fats, and proteins is defined as a TCA or Tricarboxylic Acid Cycle cycle. It is also known as the Citric Acid cycle and occurs in the mitochondria in the second phase of cellular respiration. Soluble enzymes cause reactions in the TCA cycle.

It is a common anaerobic regimen that provides NADH and FADH2. Each of these processes its own electrons in the following path that leads to oxidation. Without an electron, oxidation transfer will not occur. The TCA Cycle directly produces small amounts of ATP or energy molecules. It is also a cyclic method because the final step regenerates the first molecules of the path thus making it a closed loop. Occurs when there is oxygen.

The TCA or Tricarboxylic Cycle cycle is also known as the Krebs Cycle or Citric Acid Cycle. It is the second stage of cellular respiration that occurs in the mitochondrial matrix. All the enzymes involved in the citric acid cycle are dissolved.

The TCA cycle is a set of eight improved reactions and eight mediators that break down hydrocarbon substrates into carbon dioxide and water using the energy released to convert nicotinamide adenine dinucleotide from NAD + to NADH or flavin. adenine dinucleotide goes from FADH to FADH. FADH2.Succinate → fumarate: (FADH2) 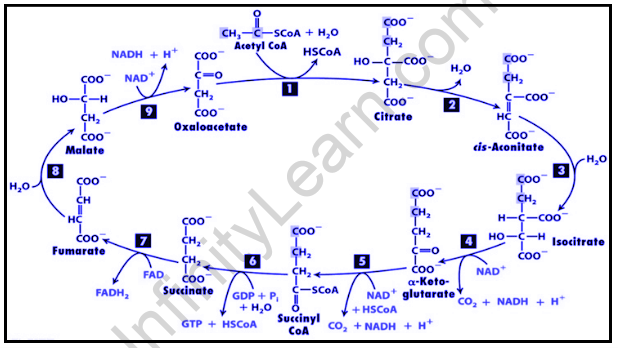 It is an aerobic method because NADH and FADH2 are produced to transfer their electrons to a path that will use oxygen. When electron transfer does not occur, no oxidation occurs. Very little ATP is produced during the process directly.

The TCA cycle is a closed-loop. The final step of the process renews the first molecule of the method.

The TCA Cycle or Citric Acid cycle was proposed by British biochemist Sir Hans Adolf Krebs. Krebs clarified much of the reaction in this approach and gained recognition for his work. In addition, Fritz Lipmann and Nathan Kaplan discovered Coenzyme A which later allowed other researchers to perform a complete cycle as we know it today.

Steps of the TCA Cycle:

The TCA cycle is an eight-step process that plays a major role in atomic fragmentation. Macromolecules such as glucose, sugar, fatty acids, amino acids, etc. cannot directly enter the TCA cycle. Therefore, they begin to break down into two acetyls Acetyl CoA. After Acetyl CoA enters the TCA cycles, it undergoes another chemical reaction to produce carbon dioxide and energy. Each step of the process is processed by a soluble enzyme.

Pyruvate derived from glucose undergoes oxidation to provide acetyl CoA. So Acetyl CoA enters the cycle and follows a series of reactions:

One cycle of Citric Acid produces the following final products-

Summary of the Whole Cycle:

It should be noted that one glucose molecule produces two Acetyl CoA molecules. Therefore, the number of final products is doubled.

What is the Importance of the TCA Cycle?

Although ATP produced directly in one TCA cycle is very small (2 ATP molecules per cycle), it participates in the release of many ATP atoms indirectly with the help of NADH and FADH2 produced in a cycle. Both of these are electron carriers and attach their electrons to the electron transport chain (ETC) to drive ATP molecules through oxidative phosphorylation. The TCA cycle acts as the last oxidative mechanism of degradation of carbohydrates, proteins, lipids, amino acids, via Acetyl CoA, or other intermediate cycles.

Why is the TCA Cycle an Amphibolic Approach?