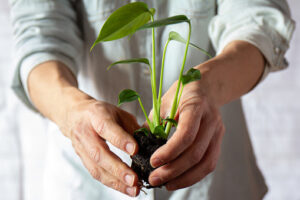 Basically, in flowering plants, the materials which need to be transported are Plant Growth Regulators, organic nutrients, water, and other mineral nutrients. Over short distances, food materials move by diffusion and also through Cytoplasmic streaming which is associated with Active transport. Transport in Plants over longer distances requires the help of the vascular system in plants and is also termed Translocation. In Plants possessing roots, the transport of water and minerals in the Xylem is generally Unidirectional i.e., upwards from roots to the stem. Also, the transport of organic and mineral nutrients in the Phloem is generally Multidirectional i.e., both upwards and downwards as well. When any plant part gets old, then nutrient materials from such parts are transported to the parts of the plants which are growing i.e., young plant parts. Other substances like Plant Growth Regulators and Hormones are also transported but in a very less quantity, sometimes in a very strictly polarised or unidirectional way from where they are prepared to the other plant parts. Thus, there is a complexion of the traffic of compounds moving in a very orderly manner in different directions such that each organ is receiving some materials and the same organ is giving out some other substance.

Special Membrane Proteins in the membranes are responsible for facilitated diffusion and for active diffusion as well and therefore they share common characteristics of being Selective, being liable to Saturation and also making a response against various inhibitors coming in contact with them. All these Transport processes are under Hormonal Regulation. Whether the diffusion is Facilitated or not, it always does take place only along a concentration gradient and does not use energy for the same to occur in plants.

In blooming plants, a perplexing development of materials occurs in various bearings. This is notwithstanding the fact that plants don’t bear any circulatory framework. Water taken up by the roots needs to arrive at every one of the pieces of the plant, up to every tip of the developing stem, where photosynthesis and development are continuing. Leaves make food, which must be provided to all pieces of the plant including the roots.

Materials likewise move over brief distances, i.e., inside the cell, across the films, or even cell to cell. The substances moved are water, mineral, supplements, natural supplements, and plant development controllers. Over brief distances, the substances move by dissemination and cytoplasmic streaming enhanced by dynamic vehicles while the significant distance transport happens through xylem and phloem and is called movement.

➨ Movement through diffusion is basically Passive and it,

➨ In Diffusion, the substances move randomly and from the area of higher concentration

to the area of lower concentration.

➨ Diffusion is a type of process that does not require the expenditure of energy.

movement throughout the plant body.

➨ Diffusion rates depend upon,

Note:- Diffusion actually, is obvious in gases and liquids, but diffusion in solids is more

likely rather than of solids.

➨ There is always a need for a gradient which is necessary for diffusion to occur.

➨ Special Membrane Proteins help in the movement of substances to pass through the membranes without the expenditure of the energy molecule, ATP.

➨ The rate of transport gets at its maximum when all the membranes proteins are used up i.e., when they become saturated.

➨ The Facilitated type of Diffusion is actually very Specific, as it does allow the cells to select substances accordingly for passing through the membrane. Also, this diffusion type is basically very Sensitive to various Inhibitors which reacts with several protein side chains.

➨ Porins are proteins that form large pores in the outer membranes of Mitochondria, Plastids, and even some Bacteria, allowing various molecules up to the size of small proteins to pass through.

Note: The Water Channels are made up of Eight various types of Aquaporins.

Symport : A type of passive movement in which two different molecules pass through the membrane in the same direction.

Antiport : A type of passive movement in which two different molecules pass through the membrane in the opposite direction.

Uniport : A type of passive movement in which a single molecule passes through the membrane independently of the other molecules.

➨ It is also carried out by Special Membrane Proteins which are Specific and Sensitive to Inhibitors at the same time. They become Saturated upon maximum usage.

Also read: Movement of Water, Gases, and Nutrients in Plants

1. What is Active Transport?

Ans: It is the transport of molecules from the area of low concentration to high concentration. It does take place outside the cell and moves from inside. It requires energy in the form of ATP.

2. What is Passive Transport?

It is the major form of transport in the cell.It does not require any kind of energy

Ans: Diffusion is defined as a process resulting from random motion of molecules by which there is a net flow of matter from a region of high concentration to a region of low concentration.

4. What is Facilitated Diffusion?

Ans: It is the process of spontaneous passive transport of molecules or ions across a biological membrane via specific membrane proteins.