Question 1.
What is cause for starting of melting of Gangotri glacier?
Answer:
Global warming

Question 3.
What is global warming?
Answer:
Increasing temperature in atmosphere.

Question 4.
Which gas is responsible for depletion of ozone layer?
Answer:
Chloroflurocarbons (CFC’s).

Question 5.
What does SPM stand for?
Answer:
Solid particulate matter.

Question 6.
What is the role of activated charcoal in purification of water?
Answer:
It removes finest particles suspended in water.

Question 8.
What is the formula of ozone?
Answer:
O3

Question 11.
Which radiations are absorbed by CO2?
Answer:
Infrared radiations

Question 14.
What is the function of ozone layer?
Answer:
Ozone layer protects us from ultraviolet rays of the sun.

Question 16.
When was the Ganga action plan launched?
Answer:
In 1985

Question 17.
What is smog?
Answer:
The combination of smoke and fog is basically known as smog.

Question 1.
What do you mean by water pollution?
Answer:
When water get contaminated by unwanted substances which have a harmful effect on both living and non-living things is referred to as water pollution.

Question 4.
What do you mean by air pollution?
Answer:
When air is contaminated by unwanted substances which have a harmful effect on both living and nonliving things then it is referred as air pollution.

Question 5.
What are the factors that are responsible for water pollution?
Answer:
Water gets polluted when unwanted and harmful substances are added to the water. Discharging of untreated sewage into the river, leaching of chemicals from agricultural practices and industries, oil spills, etc., causes water pollution.

Question 7.
Which factors decides quality of potable water?
Answer:
Potable water is clear, tasteless, odourless, have no contaminants and right pH. It has no harmful minerals or their level is too low to affect human health.

Question 8.
What’is global warming?
Answer:
Carbon dioxide is increasing day by day and it is a warm gas, which increases the temperature of the earth’s atmosphere. It is called global warming.

Question 1.
What do you mean by acid rain? How does it affect both living and non-living things?
Answer:
Due to fossil fuel and industrial combustions that mostly emits nitrogen oxides (NOx) and sulphur dioxide (SO2) into the atmosphere. Water vapour present in atmosphere reacts with these gases to form nitric acid and sulphuric acid. Normal rain water is slightly acidic with a pH range of 5.3-6.0, because carbon dioxide and water present in the air react together to form carbonic acid, which is a weak acid. When the pH level of rain water falls below this range due to combining with these acids in atmosphere, it becomes acid rain.
Acid rain has significant effects on the world environment and public health.

Question 2.
What is eutrophication? How does it affect aquatic organisms?
Answer:
Enrichment of an ecosystem with nutrients, typically compounds containing nitrogen, phosphorous or both, is known as eutrophication. Eutrophication in lakes, ponds or rivers encourages the growth of algae and other aquatic plants. These algae grow rapidly in the water system and forms algal bloom. They compete for sunlight, oxygen and space. This badly affect the aquatic life and deteriorates water quality. This is also responsible for the large scale death of aquatic plants and animals.

Water is available both on surface and under the ground. The major pollutants of surface water are toxic and poisonous wastes from households, industries, nuclear wastes, oil spills, agricultural waste, accumulation of heavy metals, chemicals from chemical factories, microorganisms from human faeces, etc.

Groundwater is mainly contaminated by leaching of harmful chemicals into the soil. Seepage of sewer near groundwater aquifer contaminates with disease causing microorganisms. Accumulation of heavy metals in soil may also lead to groundwater pollution.

Water pollution affects the entire biosphere—plants and organisms living in these bodies of water. In almost all cases the effect is damaging not only to individual species and population, but also to the natural biological communities.

Question 4.
How can you prevent water pollution?
Answer:

Question 5.
How can you prevent air pollution?
Answer:

Question 6.
Name various techniques used for purification of water.
Answer:
Water which looks clean may still have disease-carrying microorganisms and dissolved impurities. So, it is essential to purify water before drinking.
Municipal bodies uses various physical and chemical processes before supplying water into households.

Question 1.
Name any two sources which cause air pollution due to suspended particulate matter.
Answer:
Combustion of fuels and industrial activities.

Question 2.
Name three alternative sources of energy which do not cause any pollution.
Answer:
Wind energy, solar energy and hydropower.

Question 3.
The quality of air at various locations is monitored regularly by government and other agencies. In what way can you use these data?
Answer:
These data can be used to generate awareness about air pollution among people and to take immediate action to control it causes.

Question 4.
What is the best way to dispose off dry leaves? Why?
Answer:
Dry leaves can be converted into compost which is good for maintaining soil nutrients. Secondly, it does not cause pollution.

Question 5.
We should plant trees and nurture the ones already present in the neighbourhood. Why?
Answer:
Plants absorb carbon dioxide gas and releases oxygen. Thus, they play important role in purifying the earth’s atmosphere. By absorbing CO2 they also reduces the chance of global warming. Trees provide habitat to many birds and animals. They maintain water cycle in the nature and also prevent soil erosion.

Question 6.
Why is it advised that industries should switch over to cleaner fuels such as CNG and LPG in the Taj Mahal Zone in Agra?
Answer:
With mushrooming industries and oil refineries suspended particulate matter is increasing in the air. These suspended particulate matter, dust and dirt get settle on the marble giving the Taj Mahal a yellowish appearance. This is reducing the aesthetic value of one of the seven wonders of the world.

Question 1.
If we look at our daily routine, it will be observed that we use many chemicals which pollutes water bodies. But all these chemicals have become inseparable part of our daily life like detergents, toothpastes, soaps, shampoos, dish wash liquids and bars, disinfectants, etc. If this sewage from our house is discharged in water bodies untreated causes havoc.

Activities and Projects
Question 1.
In some cities, a pollution check has been made compulsory for vehicles. Visit a petrol pump in order to learn about the process of conducting a pollution check. You may systematically record your findings in the following areas:

Answer:
Do it yourself.

Question 2.
Conduct a survey in your school to investigate various environment related activities that have been undertaken. The class can divide itself into two groups, with each group looking at a different area. For example, one group can find out whether there is an environment club in the school. What are its objectives? What is its calendar of events? How can you become a member?
If your school does not have such a club, you even think of starting one along with a few of your friends.
Answer:
Do it yourself.

Question 3.
Organise a field visit to a river in or around your town with the help of your teachers. Observations followed by discussion could focus on

Answer:
Do it yourself.

Question 4.
Find out with the help of your teachers and the internet (if possible), whether there are any international agreements to control global warming. Which are the gases covered under these agreements?
Answer:
Do it yourself.

I. Multiple Choice Questions
Choose the correct option.
Question 1.
Which of the following is a major source of water pollution?
(a) Sulphur dioxide
(b) Nitrogen oxide
(c) DDT
(d) Hydrogen oxide

Question 2.
The phenomenon of marble cancer is due to
(a) soil particles
(b) fog
(c) CFCs
(d) acid rain

Question 3.
Which gas is the major pollutant of air?
(a) Carbon monoxide
(b) Nitrogen
(c) Oxygen
(d) Propane

Question 4.
The solid or liquid particles dispersed in the air are called
(a) oxides
(b) acids
(c) hydrocarbons
(d) aerosols

Question 8.
Pollution of water is due to
(a) oil refineries
(b) paper factories
(c) sugar mills
(d) all of these

Question 10.
Chlorofluorocarbon is used in
(a) refrigerators
(b) air conditioners
(c) aerosol sprays
(d) all of these

Question 11.
Which of the following is not a way to conserve water?
(a) Replace
(b) Reuse
(c) Reduce
(d) Recycle

Question 13.
The contamination of natural environment is known as
(a) pollution
(b) greenhouse effect
(c) global warming
(d) CFCs

Question 14.
Agents that pollute water, soil and air is known as
(a) pollutants
(b) waste
(c) effluent
(d) garbage

Question 16.
Which of the following is not a greenhouse gas?
(a) Nitrogen
(b) Methane
(c) Water vapour
(d) Carbon dioxide

Question 17.
The occasion of planting lakhs of trees in the month of July every year is known as
(a) Forest conservation day
(b) Plantation month
(c) Van mahotsav
(d) Wildlife week 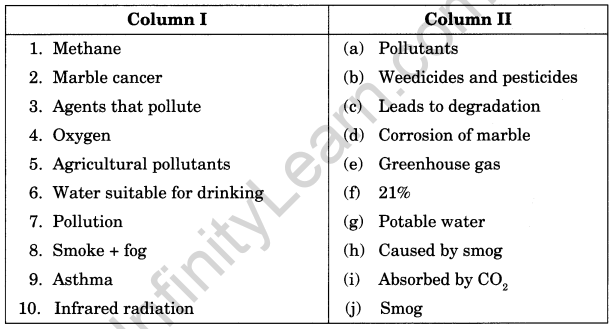 IV. True or False
State whether the given statements are true or false.
1. CFC’s are not used in refrigerators.
2. 78% of oxygen is present in earth’s atmosphere.
3. Rapid growth of algae on the surface of water is known as algal bloom.
4. SO2, CO2 and nitrogen oxides are polluting gases.
5. Infrared radiations are absorbed by oxygen.
6. Acid rain does not affect the soil and plants.
7. Substances which contaminate the air are called water pollutants.
8. Smog causes breathing difficulties.
9. CFC’s damage the ozone layer of the atmosphere.
10. Water which looks clean still has dissolved impurities and disease causing microorganisms.
11. Corrosion of marble is known as marble cancer.
12. Global warming is a serious threat for life on earth.
13. Potable water is translucent.
14. We can use any amount of chlorine to purify water.
15. Water is a precious natural resource.
Answer:
1. False
2. False
3. True
4. True
5. False
6. False
7. False
8. True
9. True
10. True
11. True
12. True
13. False
14. False
15. True