Question 4:
“What was Chipko Andolan”? How did this Andolan ultimately benefit the local people and the environment?
Answer:
Chipko Movement. Chipko Movement is an example of contribution of common people towards the conservation of forests. The Chipko Movement also called ’Hug the tree’ movement originated from an incident in a remote village called ’Reni’ in Garhwal (Himalayas), where the people of this village clasped the tree trunks with their arms to protect them from being cut down by a contractor’s workers. The people acted this way because they knew that this mass deforestation would spoil their healthy environment. The forest trees were thus saved.
The Chipko Movement quickly spread across all the communities and helped in the conservation of forests and thus helped in safeguarding the environment.

Question 5:
A metal ’M’ is found in nature as its carbonate. It is used in the galvanization of iron.
Identify ’M’ and name its ore. How will you convert this ore into free metal?
Answer:
’M’ = Zinc metal
Zinc occurs as Zinc Carbonate in calamine ore, ZnCCh.
Zinc can be extracted from the ore by:
(i) Zinc Carbonate is first converted into Zinc Oxide by calcination. When calamine ore (zinc carbonate) is heated strongly in the absence of air, it decomposes to form zinc oxide and carbon dioxide.

Question 7:
(a) In electrolysis of water, why is the volume of gas collected over one electrode double that of gas collected over the other electrode?
(b)
(i) What is observed when a solution of potassium iodide is added to a solution of lead nitrate taken in a test tube?
(ii) What type of reaction is this?
(iii) Write a balanced chemical equation to represent the above reaction.

Answer:
(a) In electrolysis of water (H2O), the hydrogen goes to one test tube and oxygen goes to to another. The two electrodes collect H and O separately.
Since water (Hsub>2O) consists of 2 parts of hydrogen and 1 part of oxygen, so, the volume of hydrogen gas (Hsub>2) collected over cathode (negative electrode) is double the volume of oxygen gas (Osub>2) collected over anode (positive electrode).
(b)
(i) When potassium iodide solution is added to lead nitrate solution, then a yellow precipitate of lead iodide is produced along with potassium nitrate solution.
(ii) This is a double displacement reaction.

OR
You are provided with three test tubes A, B and C which contain distilled water, acidic solution and basic solution respectively. If you are given blue litmus paper only, how will you identify the contents of each test tube?
Answer:

Question 8:
State the function of receptors in our body. Think of any three situations where receptors in the body do not work properly. Mention the problems which are likely to arise.
Answer:

Question 9:
In the given electric circuit if the current flowing through 3 Ω resistor is 1A, find the voltage of the battery and the current I drawn from it. 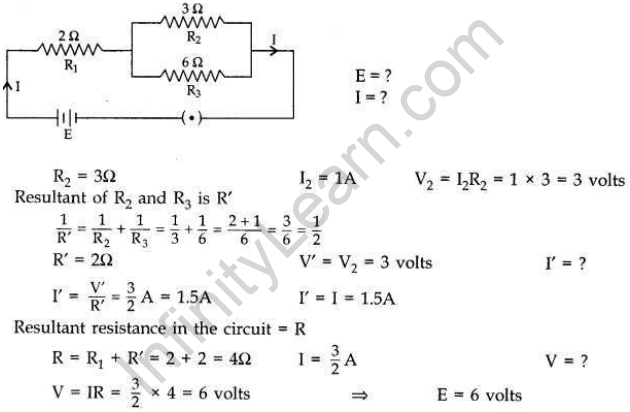 Question 10:
State the principle of working of ocean thermal conversion plant. Explain how the plant works? Write one essential condition for it to operate properly.
Answer:
The energy available due to the difference in the temperature of water at the surface of the ocean and at deeper levels is called Ocean Thermal Energy (OTE).
Condition for it to operate properly:

Question 11:
An aldehyde as well as a ketone can be represented by the same molecular formula, say C3H6O. Write their structures and name them. State the relation between the two in the language of science.
Answer:
Molecular formula: C3H6O

Question 13:
Define reproduction. How does it help in providing stability to the population of species?
Answer:

Explain the term “Regeneration” as used in relation to reproduction of organisms. Describe briefly how regeneration is carried out in multicellular organisms like Hydra.
Answer:

Question 15:
The image of an object formed by a mirror is real, inverted and is of magnification -1. If the image is at a distance of 40 cm from the mirror, where is the object placed? Where would the image be if the object is moved 20 cm towards the mirror? State reason and also draw ray diagram for the new position of the object to justify your answer.
Answer:
Magnification, m = -1; Image is real and inverted; Image distance = -40 cm

When object distance is equal to the image distance and image is real, then the object is placed at C. If the object is moved 20 cm towards the mirror, then its new position would be at the focus of the mirror.

Question 16:
(a) Explain any two physical properties of ionic compounds giving reason.
(b) List any two metals found in free state in earth’s crust. Where are they located in activity series?
(c) Metals towards the top of the activity series can not be obtained from their compounds by reducing with carbon. Why?
Answer:
(a) Physical properties of ionic compounds:

Question 17:
(a) Define reflex action. State its significance.
(b) How do plants respond to external stimuli?
Answer:
(a) A reflex action is an automatic response to a stimulus. The simplest form of response in the nervous system is reflex action. This is a rapid, automatic response to a stimulus which is not under the voluntary control of the brain. It is described as an involuntary action. The pathway taken by nerve impulses in a reflex action is called the reflex arc. Reflex actions are the actions which we perform without thinking to protect ourselves. For example, coughing is a reflex action which clears our windpipe. The pupils of our eyes get smaller in bright light. This reflex action protects the retina of our eyes from damage due to much light. The pupils of our eyes get bigger in dim light so as to help us see properly even in dim light.
(b) Plants respond to external stimuli such as light, touch, etc. A growth movement of a plant part in response to an external stimulus in which the direction of stimuli determines the direction of response in called tropism.

Question 18:
State Ohm’s law. Draw a labelled circuit diagram to verify this law in the laboratory. If you draw a graph between the potential difference and current flowing through a metallic conductor, what kind of curve will you get? Explain how would you use this graph to determine the resistance of the conductor.
Answer:
Ohm’s law states that the electric current, through a conductor, is directly proportional to the potential difference across its two ends when, other physical conditions like temperature, etc., remain constant. 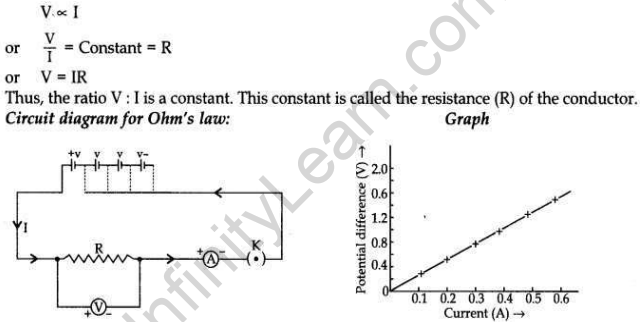 Explanation. If a graph is drawn between the potential difference (V) and current (I), the graph is found to be a straight line passing through the origin. This shows current is directly proportional to the potential difference. Thus the ratio V/l remains constant. This constant is called the resistance of the conductor. The gradient of the straight line graph is related to the resistance (R) of the conductor.

(a) A coil of insulated wire is connected to a galvanometer. What would be seen if a bar magnet with its south pole towards one face of the coil is

These activities are then repeated with north pole of the magnet. What will be the observations?
(b) Name and define the phenomenon involved in above activities.
(c) Name the rule which can determine the direction of current in each case.
Answer:
(a) A coil of insulated wire is connected to a galvanometer and if a bar magnet with its south pole towards one face of the coil is

If this activity is repeated with north pole of the magnet 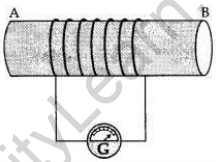 (b) This phenomenon involved in this activity is ’Electromagnetic Induction’. The production of electric current by moving a magnet inside a fixed coil of wire is called electromagnetic induction. 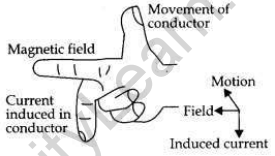 (c) The direction of induced current is determined by ’Fleming’s Right Hand Rule’. 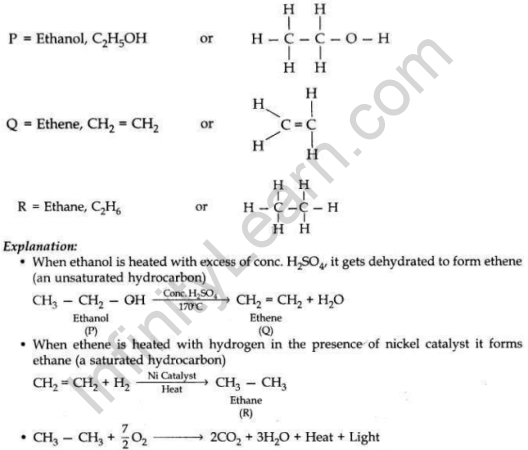 Question 20:
Define evolution. How does it occur? Describe how fossils provide us evidences in support of evolution.
Answer:
Evolution. Evolution is the sequence of gradual changes which take place in the primitive organisms over millions of years in which new species are produced.
How it occurs?

Relationship between fossils and evolution:

Question 21:
It is desired to obtain an erect image of an object, using concave mirror of focal length of 12 cm.
(i) What should be the range of distance of an object placed in front of the mirror?
(ii) Will the image be smaller or larger than the object? Draw a ray diagram to show the formation of image in this case.
(iii) Where will the image of this object be, if it is placed 24 cm in front of the mirror? Draw a ray diagram for this situation also to justify your answer.
Show the positions of the pole, the principal focus and the centre of curvature in the above ray diagrams.
Answer:
In a concave mirror an erect image will be obtained when the object is placed between
pole and focus of the mirror.
Focal length,/= 12 cm

Question 22:
To study the dependence of potential difference (V) on current I across Resistor (R), four circuit diagrams are prepared. 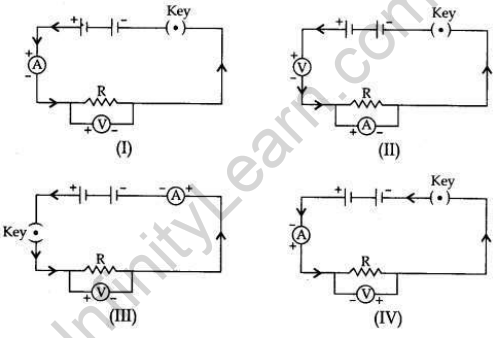 Question 23:
(i) While studying the combination reaction on adding water to quick lime, name the product formed and write its colour.
(ii) While studying the decomposition reaction by heating ferrous sulphate crystals in a test-tube, a product is formed in the test-tube. Name the product and write its colour.
Answer:
(i) Quicklime (CaO) reacts vigorously with water to form slaked lime [Ca(OH)2] which is white in colour.

Question 26:
A student is observing a permanent slide showing sequentially the different stages of asexual reproduction taking place in yeast. Name this process and draw diagrams of what he observes in a proper sequence.

The process of reproduction in yeast is budding.
Question 27:
An object of height 2.5 cm is placed at a distance of 15 cm from the optical centre ’O’ of a convex lens of focal length 10 cm. Draw a ray diagram to find the position and size of the image formed. Mark optical centre ’O’, principal focus F and height of the image on the diagram.
Answer: