Forms of Inheritance
We know that, inheritance is an ability of Object Oriented Programming (OOP) to inherit the properties of an existing class to a subclass.
There are five forms of inheritance as follows:
1. Single Inheritance When a subclass inherits properties and behaviours from only one superclass or base class. It is known as single inheritance.

3. Hierarchical Inheritance When more than one subclasses inherit from one superclass (or base class) inheritance. 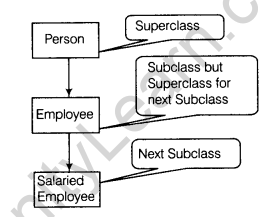 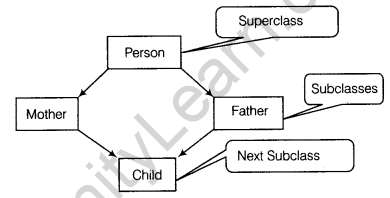 Note In the combination, if one of the form is multiple inheritance then the inherited combination (hybrid inheritance) is not supported by Java through the classes concept but it can be supported or achieved by using the concept of interface.

Subtleties of Inheritance in Java
Important points regarding the inheritance of Java class are as follows:

Invoking a Overloaded Methods
When we try to invoke a particular method, it will automatically select a particular method after matching the arguments supplied with the invoking statement and the parameters of actual definition. In case an exact match is not found, then program will try with near match by automatic type casting in such a way that there is no loss of information, e.g. if an integer value is supplied for a float type argument, then it will be converted into float type variable (e.g. 5 will become 5.0).
We must remember if two methods are having same numbers of arguments in same order, then they cannot be overloaded, whether the name of variables are same or not.

Here, run( ) method of Vehicle class is overridden by the child class Car. If you want to refer to the overridden or hidden methods and variables of the superclass, you can use the super keyword. Here we must know that

Output of the above program will be
Vehicle is running
Car is running.

The abstract methods of superclass need overriding in each subclass. It means we have to write their definition in the subclass.

Inside the body of the interface, we declare the following things: