FACTS THAT MATTER
Psychotherapy is a voluntary relationship between the one seeking treatment or the
client and the one who treats or the therapist.
1. Purpose: To help the client to solve the psychological problems being faced by her or him.
2. Aim: To change the maladaptive behaviours, decrease the sense of personal distress, and help the client to adapt better to his/her environment.
3. The relationship is conducive for building the trust of the client so that problems may be freely discussed.
Characteristics:
1. There is systematic application of principles underlying the different theories of therapy.
2. Only persons who have received practical training under expert supervision can practise psychotherapy.
3. The situation involved a therapist and client who seeks and receives help for his/her emotional problems (this person is the focus of attention in the therapeutic process).
4. The interaction of the therapist and the client results in the consolidation or formation of the therapeutic relationship. This is a confidential, interpersonal, and dynamic relationship.
Goals:
(i) Reinforcing client’s resolve for betterment.
(ii) Lessening emotional pressure.
(iii) Unfolding the potential for positive growth.
(iv) Modifying habits.
(v) Changing thinking patterns.
(vi) Increasing self-awareness.
(vii) Improving interpersonal relations and communication.
(viii) Facilitating decision-making.
(ix) Becoming aware of one’s choices in life.
(x) Relating to one’s social environment in a more creative and self-aware manner.
Therapeutic Relationship:
The special relationship between the client and the therapist is known as the therapeutic
relationship or alliance.
Components:
1. Contractual Nature of the Relationship: Two willing individuals, the client and the therapist, enter into a partnership which aims at helping the client overcome his/ her problems.
2. Limited Duration of the Therapy: This alliance lasts until the client becomes able to deal with his/her problems and take control of his/her life.
Properties:
(i) It is a trusting and confiding relationship.
(ii) The high level of trust enables the client to unburden herself/himself to the therapist and confide her/his psychological and personal problems to the latter.
Classification of Psychotherapies 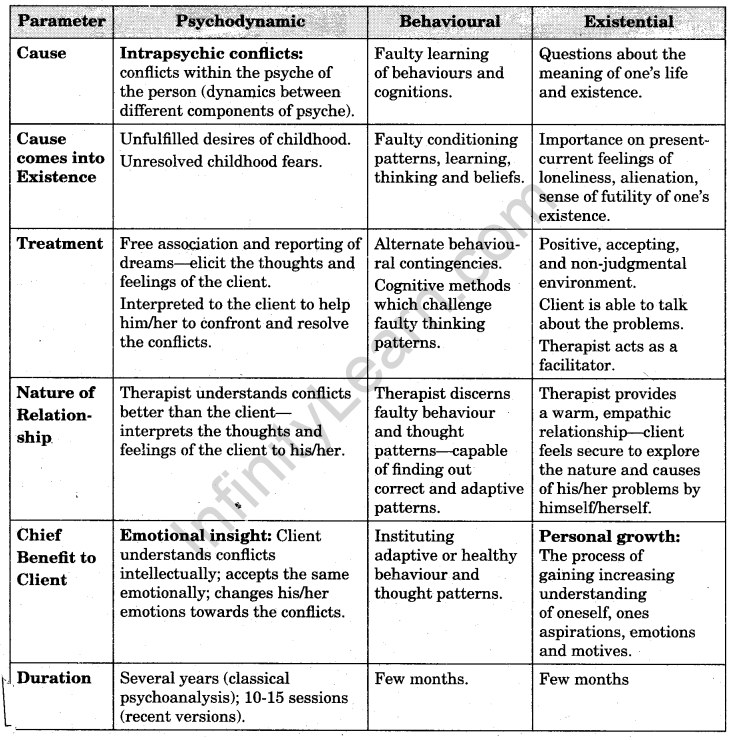