Question 2.
Discuss the major cause of winds.
Answer:
Wind currents are generated due to uneven heating on the earth. It may be between equator and pole and between land and water.

Question 4.
Briefly describe the effect of heat on air pressure.
Answer:
The heat causes air to expand and occupies more space. It becomes lighter. That’s why, warm air is lighter than the cold air.

Question 7.
Suggest some precautions to be taken to prevent the roof of a tin sheet from flying away during a fierce wind storm. [NCERT Exemplar] Answer:
Some precautions are

Question 10.
Figure shows a diagrammatic representation of trees in the afternoon along a sea coast. State on which side is the sea, A or B? Give reasons for your choice. [NCERT Exemplar]

Answer:
In the afternoon, the wind blows from sea to land.
As pressure on the land is less than the pressure above sea, so the sea is on B side.

Question 11.
Name the factor responsible for the increase of speed of wind or cyclones.
Answer:
Factors like wind speed, wind direction, temperature and humidity contribute to the development of cyclones.

Question 13.
Can you say why smoke always rises up?
Answer:
As we know that smoke is the combination of hot airs and hot air becomes light weight with respect to cold air. Thus, it always rises up.

Question 14.
In the wind flow pattern, it can be found that the wind shown is not in the exact North-South direction. Explain why.
Answer:
It is because the winds would have blown in the North-South direction either from North to South or from South to North. A change in direction is however caused by the rotation of the earth.

Question 1.
Paheli kept an empty bottle made of plastic inside a refrigerator. After few hours, when she opened the refrigerator, she found the bottle had collapsed. Explain the possible reason. [NCERT Exemplar; HOTS] Answer:
On cooling the air, contraction of air takes place. The air inside the bottle contracts due to low temperature. Hence, the bottle collapses due to the outside pressure.

Question 2.
Mention an example when the cyclone hit a part of India and how much destruction was caused due to it.
Answer:
Orissa (a part of India) was hit by cyclone in 18th October 1999. The wind speed was 200 km/h and smashed 45000 houses making 700000 people homeless. Another cyclone hit the Orissa again an 29th October with the wind speed of 260 km/h. Thousands of people lost their lives and property worth crores of rupees was destroyed.

Question 5.
Explain thunderstorm and how are they produced.
Answer:
The swift movement of the falling water along with the rising warm air producing sound, lightning, heavy rain and strong wind is called thunderstorm.

Question 6.
Name some effective safety measures against cyclone?
Answer:
On the part of government

On the part of the people

These are produced by the dark clouds which form at fairly low altitude in the atmosphere.

Question 7.
Tornado is different from a cyclone. Briefly explain Tornado. What destructions does it cause?
Answer:
These are formed over sea and are called water spouts. Tornado develops from thunderstorm and are formed mostly on the land. These are violent and can reach the speeds of more than 500 km/h destroying everything in their path. These are not very common in India but occurs in Canada and USA.

Most of the tornadoes are weak. When the warm air from the earth’s surface rises up, it whirls around it and causes very high speed winds. These are much smaller than cyclones, i.e. from a few metre to a few hundred metre but the wind speed can rise as high as 500 km/h. The funnel of tornado sucks up everything at its base like dust, debris, cars, trees and even houses.

Question 9.
Monsoon brings rain. Explain the formation of monsoon.
Answer:
During summer, when the land gets warmed and temperature of land becomes higher than that of water in ocean. The air above the land gets heated and rises. Therefore, the cold wind flows from the ocean towards the land. These are monsoon winds which bring water and cause rain.

Question 11.
Rohan was very happy that there was his birthday. He was decorating the room by blowing balloons. He was wondered that most of his balloons burstd. He rushed to his father and asked the reason. His father smiled and explained.
(a) Can you explain the region that why his balloons get burst?
(b) What can be conclude from the condition mentioned?
(c) What are the values shown by Rohan? [Value Based Question] Answer:
(a) When Rohan blows air into the balloon, the balloon gets inflated due to the pressure exerted by air. But, Rohan observed that most of his balloons burstd. The reason behind it was, he overfilled the air into the balloon. The warm air gets expanded inside the balloon and exerted more and due to the more pressure on the walls of the balloon, balloons burstd.
(b) From the condition mentioned above, it can be concluded that air expands on heating.
(c) Curiosity to learn and scientific attitude.

Question 14.
A flat in Mumbai with a balcony facing the sea has some clothes hung on a clothes line in the balcony. Towards which direction, the clothes will be blown in the afternoon? Explain it. [NCERT Exemplar; HOTS] Answer:
As during the afternoon, the land becomes hot which ultimately creates hot air above it and we know that hot air rises up and there is low pressure created. Thus, winds from sea start blowing towards the land and the clothes will be blown towards the house because sea breeze blowing towards the land.

Question 15.
Briefly explain what are cyclones and how are they formed.
Answer:
High speed winds and air pressure difference can cause cyclones.They are formed when water vapour changes back to liquid by the release of heat. This heat warms air around and it rises to move up and more air rushes to the vacant place. Thus, a cycle is formed which have low pressure and very high speed of air.

Question 1.
The picture in figure shows tree line along the sea coast on an tops are permanently bent in one direction. Are the trees bendisland near the equator. As shown, the tree towards the sea or away from it? Explain. [NCERT Exemplar]

Answer:
In the given figure, the tree line along the sea coast on an island near the equator shows that tree tops are permanently bent in one direction. The reason behind this movement of tree is that during the day time the wind blows from sea to land because land gets warmer more quickly than sea.

This makes the air of land, warm and lighter which is raised up in the sky. Therefore, the top of the bent trees shows the moving direction of wind from sea to land.

Caution Perform the experiment with the help of a teacher.

Now, put the burning candle below the open mouth of one side paper bag. We will see that after sometime, the left side of wooden stick goes up showing that it has become lighter than the right side and the balance of the cup is disturbed. The reason for this is that when a burning candle is placed below the one side paper bag, the air above the candle flame gets heated. The hot air being lighter rises up and fills the paper bag above it. Therefore, this side of wooden stick becomes lighter and moves up.
This experiment shows that the air becomes lighter and moves up.

This fact of air is utilised in launching hot air balloons. In nature, there are several situations where warm air rises at a place. The air pressure at that place is lowered. The cold air from the surrounding areas rushes in to fill its place.

The swift movement of the falling water along with the rising warm air producing sound, lightning, heavy rain and strong wind is called thunderstorm. It develops in hot and humid tropical areas like India and is accompanied by heavy rains or hail. Thunderstorms are produced by the dark clouds which form at fairly low altitude in the atmosphere. In the tropical area, the air gets warmed up and makes it to rise, whereas humidity provides the water vapour for the formation of cloud.

Therefore, it can be said that to occur a thunderstorm, it requires moisture, rapidly rising warm air and sea breeze or mountains.

Question 5.
Advanced technology has helped people to save them from natural calamities like thunder storm and cyclone. Explain how.
Answer:
During the early part of the last century, the people residing in coastal regions have less than a day for the preparations or to evacuate their homes from an overcoming cyclone. But, the today’s situation is very different. Today we are much protected. We have satellites and radars which can issue the cyclone watch or cyclone alert before 48 hrs (in advance) of any expected storm and a cyclone warning is issued 24 hrs in advance.

Therefore, the coastal residents have sufficient time to prepare and evacuate their homes. The message related to cyclone is broadcasted over the ratio every hour or half hour when a cyclone is nearer the coast.

In this way, the advanced technology has helped us in giving better protection from cyclones. Several national and international organisations cooperate to monitor the cyclone related disasters. 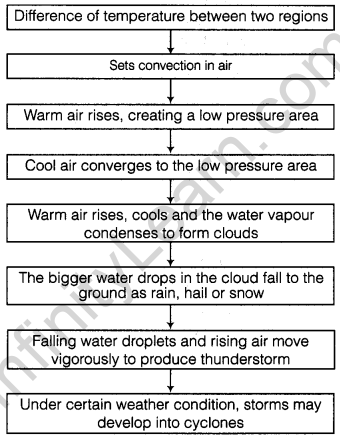 Multiple Choice Questions
Question 1.
A fire alarm usually detects smoke in case of fire. Where should such an alarm be placed in a room? [NCERT Exemplar] (a) Near the door
(b) On the floor
(c) On any wall
(d) On the ceiling
Answer:
(d) On the ceiling

Question 4.
Four schematic diagrams are shown below to depict the direction of sea breez. Which of them gives the correct direction? [NCERT Exemplar] 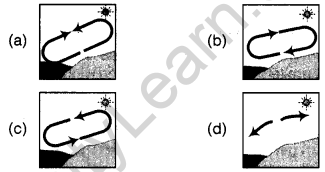 Answer:
(c) In summer, near the equator the land becomes warm and the temperature of the air increases. This causes the air from the ocean to blow towards the land. These are known as summer monsoon winds.

Question 9.
Which of the following place is most likely to be affected by a cyclone? [NCERT Exemplar] (a) Mumbai
(b) Puri
(c) Goa
(d) Porbandar
Answer:
(b) Puri

Question 16.
The word monsoon is derived from the word
(a) mausam
(b) monsoon
(c) museum
(d) storm
Answer:
(a) mausam

True/False
1. The layer of air surrounding the earth is called atmosphere.
2. Air gets contracted on the heating.
3. Cyclone develops in the polar region.
4. Hud-Hud and Katrina are Typhoon.
5. Tornado is frequently observed in India.
6. Cyclone appears a dark funnel shaped structure.
7. Falling water droplets and rising air move vigorously to produce thunderstorm.
8. Monsoon winds do not carry water with them.
9. The wind speed during cyclone is 150-250 km/h.
10. Uneven heating of land and water in winter (North-West and colder land) brings little rain in winter.
11. If wind flows from land to the ocean, then it is day time. [NCERT Exemplar] 12. A very high pressure system with very high speed wind surroundings, it forms a cyclone.
13 . The coast line of India is not vulnerable to cyclones. [NCERT Exemplar] 14 . Warm air is lighter than cool air. [NCERT Exemplar] Answers:
1. True
2. False, air expands on heating.
3. False, cyclone develops in tropical region.
4. True
5. False, tornado does not occur in India.
6. False, tornado is dark funnel shaped structure.
7. True
8. False, monsoon wind carry water with them
9. True
10. True
11. False, if wind flows from land to the ocean, then it is night time.
12. False, a very low pressure system with very high speed wind revolving around it forms a cyclone.
13. False, the whole coastline of India is vulnerable to cyclone.
14. True

Question 2.
Match the Column I with Column II.

Question 3.
Match the Column I with Column II.