Bohr atomic model: The Bohr model, also known as the Rutherford–Bohr model, is a system consisting of a small, dense nucleus surrounded by orbiting electrons, similar to the structure of the Solar System, but with attraction offered by electrostatic forces instead of gravity. It was proposed by Niels Bohr and Ernest Rutherford in 1913. The advance over the 1911 Rutherford model was mostly due to Haas and Nicholson’s new quantum physical interpretation, which eschewed any attempt to connect with classical physics radiation. The model’s main achievement was describing the Rydberg formula for atomic hydrogen’s spectrum emission lines. The Rydberg formula had been observed experimentally for a long time, but it was not given a theoretical foundation until the Bohr model was introduced. The Bohr model not only explained why the Rydberg formula is structured the way it is, but it also justified the underlying physical constants that build up the formula’s empirical outcomes.

The attributes of atomic electrons are explained by the Bohr atomic model and subsequent models based on specific allowable possible values. When electrons on the subatomic level bounce between the allowed and stationary states, the model explains how an atom absorbs or emits radiation. The experimental evidence of the existence of these states was obtained by German-born physicists James Franck and Gustav Hertz.

In comparison to the valence shell atom model, the Bohr model is a very basic representation of the hydrogen atom. As a theory, it may be obtained as a first-order estimate of the hydrogen atom using the broader and much more precise quantum mechanics and hence may be regarded to be an obsolete scientific theory. The Bohr model is still often given to introduce children to quantum mechanics or energy level diagrams before going on to the more accurate, but more complex, valence shell atom. This is due to its simplicity and correct conclusions for selected situations.

The Bohr atomic model was proposed in 1913 by a Danish physicist named Neil Bohr. He improved on Rutherford’s atom model by removing its flaws and limits. Rutherford explained earlier in the Rutherford Model that an atom’s nucleus is positively charged and surrounded by electrons.

The electrons follow a predetermined course known as orbits. Rutherford’s concept, in which electrons travel around in fixed orbital shells, was amended by Bohr. He also stated that each orbital shell has a set of energy levels. As a result, Rutherford essentially explained an atom’s nucleus, whereas Bohr advanced the model. He went over electrons and the various energy levels linked with them.

A comparatively tiny positive charge nucleus is encircled by swirling negatively charged electrons in fixed orbits, according to the Bohr Atomic Model. He came to the conclusion that electrons with more energy are placed away from the nucleus, while electrons with less energy are located near the nucleus.

The atomic model of Bohr had a few flaws. They are as follows:

In the Bohr model of the atom, the nucleus contains the majority of the atom’s mass in the form of protons and neutrons. Negatively charged electrons orbit the positively charged core, contributing little in terms of mass but being electrically similar to the protons in the nucleus. The Sommerfeld model, often known as the Bohr – Sommerfeld model, proposed that electrons can move around a nucleus in elliptical orbits rather than the circular orbits of the Bohr model. The Bohr – Sommerfeld system proved fundamentally incoherent, resulting in several contradictions.

In a similar fashion, the orbits keep growing. 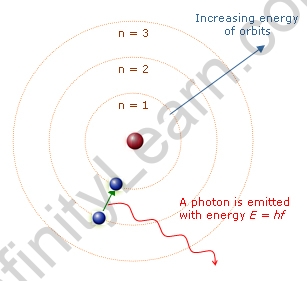 In Bohr's model, how do electrons move?

According to the hypothesis, electrons in atoms move in circular orbits around a central nucleus and can only orbit stably at a specific set of distances from the nucleus in only certain predetermined circular orbits. These orbits are also associated with energy shells or energy levels, and they are tied to specific energies.

How did Bohr find out about electrons?

Bohr was the first one to discover that electrons can move around the nucleus in distinct orbits and that the number of electrons in the outer orbit determines an element's properties.

Who was the first to discover electrons?

When J. J. Thomson was researching the attributes of the cathode ray in 1897, he discovered the electron.