Question.3. Which special feature distinguishes a movement from an interest group?
Answer. Movements are usually issue specific to achieve a single objective within a limited time frame.

Question.6. What comprises ‘terms of credit’?
Answer. Interest rate, collateral and documentation requirement and mode of repayment together comprise terms of credit.

Question.8. Give one characteristic feature of a ‘Special Economic Zone’?
Answer. Special Economic Zones or SEZs are industrial zones set up by the government having word class facilities such as electricity, water, roads, transport, storage, recreational and educational facilities. Companies who set up production units in SEZs are exempted from taxes for an initial period of five years.

Question.15. What are the differences between democracy and dictatorship in the decision making process?
Answer.

Question.16. (a) What do you understand by the ‘Challenge of Expansion’?
(b) How are some countries in the world facing foundational challenge of democracy? Explain with examples.
Answer. (a) Challenge of expansion. It involves applying the basic principle of democratic government across all the regions, different social groups and various institutions. It pertains to ensuring greater power to local governments, extension of federal principle to all the units of the federation, inclusion of women and minority groups, etc. Most established democracies, e.g., India and US, face the challenge of expansion. (b) Foundational challenge of democracy is faced by some countries of the world in the following manner:

Question.18. How has foreign trade been integrating markets of different countries in the world?
Explain with examples.
Answer.

Question.19. ‘Governments initiate schemes and programmes to alleviate the suffering of the poor and meet their basic needs.
(1) Identify the fundamental right which is related to the Statement.
(2) But poverty remains in the country. What could be the reason for such a situation?
Answer.

Question.21. Describe any four measures which were introduced by the French Revolutionaries to create a sense of collective identity amongst the French people.
Answer. The first clear-cut expression of nationalism came with the French Revolution in 1789. In 1789, France was under the rule of an absolute monarch.
When the revolutionaries came to power in France, they were determined to create a new sense of unity and nationhood. For this, they emphasized the concept of France being the father land (La Patrie) for all French people, who were from now on addressed as citizens (citoyen). They were given the tri-colour flag, the three colours representing liberty*; equality and fraternity.
French revolutionaries introduced various other measures such as:

They tried to solve the problems in the following ways:

Question.23. Explain the improvements made by the Indian Railways in its functioning.
Answer.

Question.24. Explain with examples how industries in India have given a major boost to agriculture.
Answer.

Question.28. How has globalization been advantageous to both the producers as well as the consumers in India? Explain.
Answer. To Producers. Several of the top Indian Companies have been able to benefit from the increased competition.
• They have invested in newer technology and production methods and thereby raised their production standards.
• They have gained from successful collaborations with foreign companies. .
• Globalization helped in the development of IT sector.
• Good quality products are being produced at lower prices.
To Consumers. There is greater choice before consumers who can enjoy improved quality and lower prices for several products.
• People today, enjoy much higher standards of living than was possible earlier. 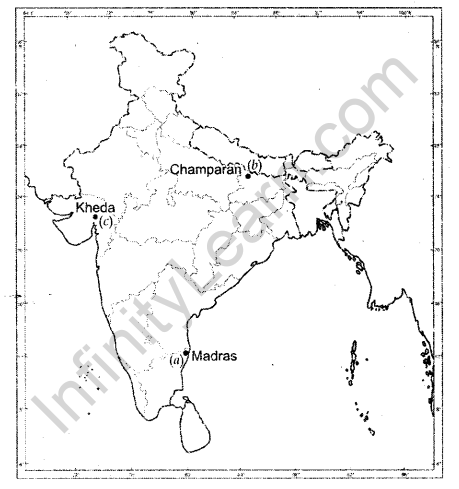 Note: The following questions are for the BLIND CANDIDATES only, in lieu of Question No. 29.
(1) The place, where the Indian National Congress session was held on September, 1920.
(2) At which place was the Civil Disobedience movement started?
(3) Where was the Peasant Satyagraha held?
Answer. (1) Calcutta
(2) Dandi
(3) Kheda

Question.30. On the given political outline map of India:
(a) Identify
A. Mica mines
B. Software Technology Park
(b) Locate and label
(i) Kandla—Sea Port 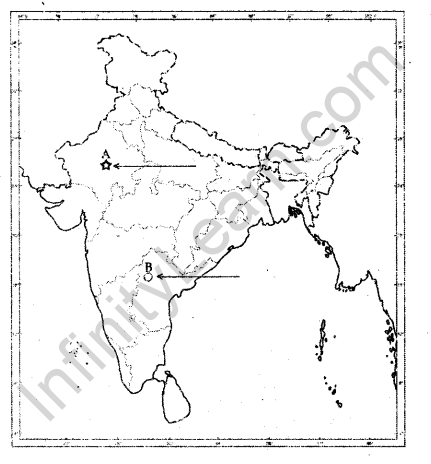 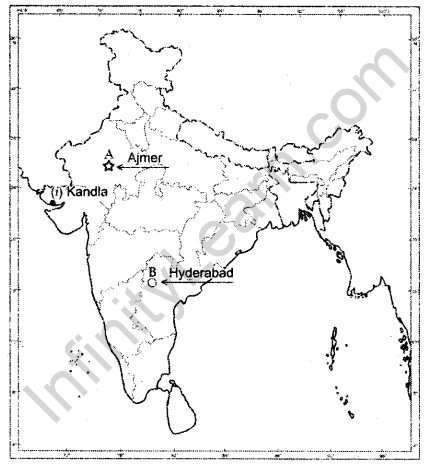 Note: The following questions are for the BLIND CANDIDATES only, in lieu of Question No. 30.
(1) In which state is Bhilai Iron and Steel Plant located?
(2) Name any one Technology Park located in Karnataka state.
(3) Name the southernmost major sea port of India.
Answer. (1) Madhya Pradesh (2) Bangalore/Mysore (3) Tuticorin

Except for the following questions, all the remaining questions have been asked in Set-I.
Question.1. What combination of colours was there in the ‘Swaraj flag’ designed by Gandhiji in 1921?
Answer. Red, Green and White

Question.4. In which state does ‘Biju Janata Dal’ exist as a regional party?
Answer. Odisha (Orissa)

Except for the following questions, all the remaining questions have been asked in Set-I and Set-II.
Question.1. Which Act did not permit plantation workers to leave the tea gardens without permission?
Answer. Inland Emigration Act of 1859.

Question.4. In which state does the ‘Rashtriya Lok Dal’ exist as a regional party?
Answer. Uttar Pradesh

Question.14. Why does Chhota Nagpur Plateau region have the maximum concentration of iron and steel industry? Explain any three reasons.
Answer. Reasons: