Is Air Present Everywhere Around Us?

Question 1.
What are the properties of air?
Answer:

Question 2.
What is atmosphere?
Answer:
Our earth is surrounded by a thin layer of air. This layer is called atmosphere. It extends up to many kilometres above the surface of the earth.

Question 3.
Why is atmosphere called the place where exchange of gases in nature occurs?
Answer:
We know that various gases are found in air. Now some organisms live on land, some in water and some deep under the soil. But all need oxygen to respire. The terrestrial organisms take oxygen from the atmosphere. You know that during respiration by living beings and burning of materials, carbon dioxide is produced along with some other gases. Also Co2 is used by the plants in the process of photosynthesis in which oxygen is released. All gases go into the atmosphere. Thus, it is a place in nature for gaseous exchange

Question 5.
The mountaineers carry oxygen cylinder with them while climbing high mountains.Why?
Answer:
The availability of air decreases gradually as we go up in the atmosphere.

What is air made up of ?

Question 4.
What will happen if the amount of oxygen is increased in the air?
Answer:
Air will become more combustible and many substances may undergo fast oxidation.

Question 5.
Why are fine hair and mucus present in our nostrils? Why should we not breathe in by mouth?
Answer:
We inhale air when we breathe through our nostrils. We also know that air contains dust particles. To prevent dust particles from getting into the respiratory system, fine hair and mucus are present inside the nose.
Since, our mouth does not contain the above discussed barriers of dust, so if we breathe through it, dust particles may enter in our respiratory tract. That is why breathing through mouth is not suggested.

Question 7.
Name the vital component of air. Specify its importance.
Answer:
Oxygen is regarded as the most important and vital component of air. The living beings take in oxygen (respiration) and give off carbon dioxide. The oxygen used is replaced by plants in photosynthesis. The concentration of oxygen in the air is thus maintained. Thus, it is very important to sustain life on the earth.

Activity 3.
In the presence of your teacher, fix two small candles of the same size in the middle of two shallow containers. Now, fill the containers with some water. Light the candles and then cover each one of them with an inverted glass (one much taller than the other) as shown in the figure. Observe carefully what happens to the burning candles and the water level.

Do the candles continue to burn or go off? Does the level of water inside glasses remain the same? 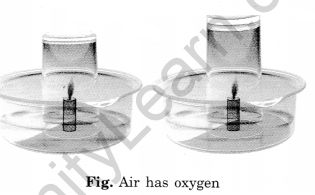 Candles go off after some time because supply of oxygen, necessary for burning, has been stopped. No, the level of the water inside glasses rises up when the candles blow out.

How Does Oxygen Become Available To Animals And Plants Living In Water And Soil?

Question 1.
What is the importance of oxygen in daily life?
Answer:
Oxygen plays a very important role in our daily life. Some of these are:

Question 3.
How does oxygen become available to the animals in water and soil?
Answer.
Air remains dissolved in water. Air is also present between the particles of soil. Hence animals living there get oxygen.

Question 4.
Are respiration and breathing same?
Answer.
Breathing is just the intake of oxygen and giving out carbon dioxide.
Respiration is a chemical process which generates energy in body.

How Is The Oxygen In The Atmosphere Replaced?

Question 2.
What happens if the percentage of oxygen in the air reaches to 70%?
Answer.
If any substance catches fire, it will become difficult to extinguish the fire, as oxygen supports combustion.

Question 5.
Define oxygen cycle.
Answer:
The cycle of consumption of oxygen by respiration and its release by photosynthesis is called oxygen cycle.

Activity 4
Find a sunny room in your school/home. Close all the doors and windows with curtains pulled down to make the room dark. Now, open the door or a window facing the sun, just a little, in such a way that it allows sunlight to enter the room only through a slit. Look carefully at the incoming beam of sunlight.

Do you see some tiny shining particles moving in the beam of sunlight (Fig.)? What are these particles? 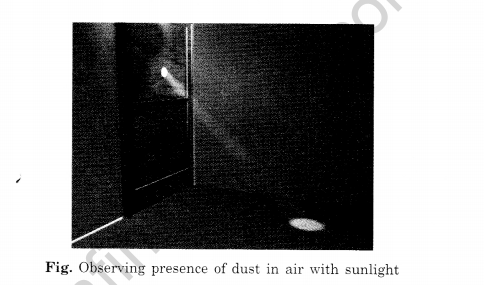 Yes, some tiny shining particles are seen moving in the beam of sunlight. These are the dust particles which are present in air.

Question 1.
Match the following items given in Column A with that in Column B:

Question 2:
Fill in the blanks with the appropriate Words

Question 3.
State whether the statements given below are True or False:

Question 4.
Choose the correct option in the following questions:
(i) Major part of the air is constituted by
(a) nitrogen
(b) oxygen
(c) carbon dioxide
(d) inert gases
Answer:
(a) 3/4th portion of air is nitrogen.

(ii) Which of the following gas helps in burning? ,
(a) Nitrogen
(b) Oxygen
(c) Carbon dioxide
(d) Carbon monoxide
Answer:
(b) Oxygen does not bum but supports burning.

(iii) Which of the following gas we use in breathing?
(a) Carbon dioxide
(b) Nitrogen
(c) Oxygen
(d) None of these
Answer:
(c) We use oxygen and produce carbon dioxide.

(vi) Air is
(a) a mixture
(b) a pure substance
(c) an element
(d) anything, that depends on the place where it is found
Answer:
(a) Air is a mixture of various gases, water vapours and dust particles.