Question 1.
Is there any similarity in materials?
Answer:
Yes, all materials possess mass and occupy space.

Question 2.
When 50 g of sugar is dissolved in 100 mL of water, there is no increase in volume. What characteristic of matter is illustrated by this observation?
Answer:
This observation indicates that particles of water have spaces between them into which sugar particles fit.

Question 3.
What happens when an inflated air balloon is pricked with a pin? Name the property of the gaseous state exhibited by this observation.
Answer:
The balloon bursts and diffusion takes place.

Question 5.
To which physical state of matter do the following statements apply?
(i) Incompressible, no fixed shape
(ii) Compressible, no definite volume
Answer:
(i) Liquid
(ii) Gas

Question 6.
Name the state of matter in which:
(i) Layers of particles can slip and slide over one another easily.
(ii) Particles just move around randomly because of very weak force of attraction.
Answer:
(i) Liquid state,
(ii) Gaseous state.

Question 7.
Define density and give its SI unit.
Answer:
Density of a substance is defined as the mass per unit volume. Its SI unit is kgm-3.

Question 11.
Why do we see water droplets on the outer surface of a glass containing ice cold water?
Answer:
The water vapour present in the air comes in contact with cold surface of the glass, loses its energy and gets converted into droplets of water.

Question 14.
Analyse the temperature versus time graph of water, given below. 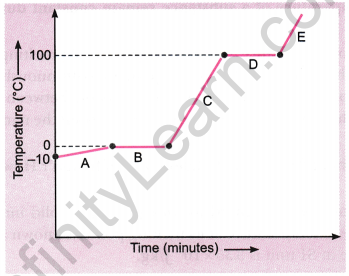 Question 6.
Give two ways in which melting points and boiling points can be useful.
Answer:

Question 7.
Alka was making tea in a kettle. Suddenly she felt intense heat from the puff of steam gushing out of the spout of the kettle. She wondered whether the temperature of the steam was higher than that of the water boiling in the kettle. Comment. [NCERT Exemplar] Answer:
The temperature of both boiling water and steam is 100°C, but steam has more energy because of latent heat of vaporisation.

Question 8.
Why does the temperature of a substance remain constant during its melting point or boiling point? [NCERT Exemplar] Answer:
The temperature of a substance remains constant at its melting and boiling points until all the substance melts or boils because, the heat supplied is continuously used up in changing the state of the substance by overcoming the forces of attraction between the particles. This heat energy absorbed without showing any rise in temperature is given the name latent heat of fusion/latent heat of vaporisation.

Question 10.
Which gas is called dry ice? Why?
Answer:
Solid CO2 is known as dry ice. This is because it directly gets converted into gaseous state without passing through liquid state on decreasing the pressure to 1 atmosphere.

Question 11.
A glass tumbler containing hot water is kept in the freezer compartment of a refrigerator (temperature <0°C). If you could measure the temperature of the content of the tumbler, which of the following graphs would correctly represent the change in its temperature as a function of time? [NCERT Exemplar]

Answer:
(a). The water will cool initially till it reaches 0°C, the freezing point. At this stage, the temperature will remain constant till all the water will freeze. After this, temperature would fall again.

Question 13.
Look at the following figures and suggest in which of the glass containers, i.e., A, B, C or D, the rate of evaporation will be the highest? Explain. [NCERT Exemplar]

Question 17.
Why do people sprinkle water on the roof after a hot sunny day?
Answer:
Water sprinkled on the roof evaporates by taking the large latent heat of vaporisation from the ground. This makes the place cool and comfortable.

Question 1.
Substance ‘A’ has high compressibility and can be easily liquefied. It can take up the shape of any container. Predict the nature of the substance. Enlist four properties of this state of matter.
Answer:
‘A’ is a gas.
Properties of gases:

Question 2.
Suggest an activity to show that the rate of diffusion of liquids decreases with increase in density of the liquid.
Answer:

This experiment shows that lesser the density, faster the rate of diffusion.

Question 3.
Classify the following into osmosis/diffusion

Question 4.
Explain what happens to the molecular motion and energy of 1 kg of water at 273 K when it is changed into ice at same temperature. How is the latent heat of fusion related to the energy exchange that takes place during this change of state?
Answer: 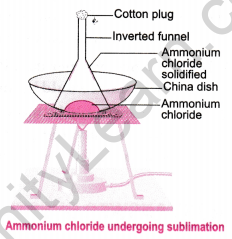 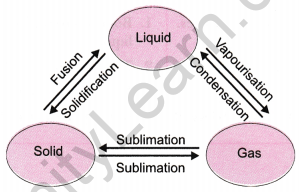 Question 7.
A student heats a beaker containing ice and water. He measures the temperature of the content of the beaker as a function of time. Which of the following (shown in figure given below) would correctly represent the result? Justify your choice. [NCERT Exemplar]

Answer:
Since ice and water are in equilibrium, the temperature would be zero. When we heat the mixture, energy supplied is utilised in melting the ice and the temperature does not change till all the ice melts because of latent heat of fusion. On further heating, the temperature of the water would increase. Therefore, the correct option is (d).

Question 8.
Explain how the rate of evaporation of a liquid is affected with:

Question 9.
You want to wear your favourite shirt to a party, but the problem is that it is still wet after a wash. What steps would you take to dry it faster? [NCERT Exemplar] Answer:
Conditions that can increase the rate of evaporation of water are:

Question 10.
How does evaporation differ from boiling?
Answer:

The fragrance produced due to burning of incense sticks is due to movement of vapours produced
rapidly in all directions.

(b) To demonstrate motion of particles of solid matter:

Question 2.
Describe an activity to determine the boiling point of water and melting point of ice. 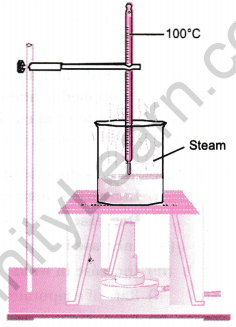 Determination of melting point of ice:

Question 3.
While heating ice in a beaker with a thermometer suspended in it, a student recorded the following observations:

Based on the above observations, answer the following questions:
(a) State the change(s) observed between 2-3 min. and name the process involved.
(b) Between 30-35 min., the temperature remains constant. State the reason for this. Name the heat involved in the process and define it.
Answer:
(a) Between 2-3 min, ice converts into water. This process is known as fusion.
(b) Between 30-35 min, the temperature remains constant because the heat supplied is used up in overcoming the intermolecular forces of liquid to change into vapours. The heat involved in the process is latent heat of vaporisation. It is the amount of heat energy required to change 1 kg of liquid into gas at its boiling point.

B will produce more cooling effect because it will absorb more heat from the surroundings for evaporation.

Question 5.
Comment on the following statements:
(a) Evaporation causes cooling.
(b) Rate of evaporation of an aqueous solution decreases with increase in humidity.
(c) Sponge though compressible is a solid.
(d) Ice is solid at 0°C, while water is liquid at room temperature.
(e) Sugar crystals dissolve faster in hot water than cold water. [NCERT Exemplar] Answer:
(a) Evaporation produces cooling as the particles at the surface of the liquid gain energy from the
surroundings and change into vapour, thereby producing a cooling effect.
(b) Air around us cannot hold more than a definite amount of water vapour at a given temperature which is known as humidity. So, if the air is already rich in water vapour, it will not take up more water; therefore, rate of evaporation of water will decrease.
(c) A sponge has minute holes in which air is trapped. Also the material is not rigid. When we press it, the air is expelled out and we are able to compress it. But it is a solid because it has definite shape and volume and does not change its shape unless compressed.
(d) Ice is solid at 0°C because it has a definite volume and definite shape due to strong intermolecular forces. Water is liquid at room temperature because it has definite volume and no definite shape due to weak intermolecular forces of attraction.
(e) Sugar crystals dissolve faster in hot water than cold water because hot water molecules have more kinetic energy. Due to this, they strike faster on the particles of sugar than cold water molecules. As a result, hot water will dissolve them faster than cold water.

Question 1.
The diagram below shows burning of an oil lamp. 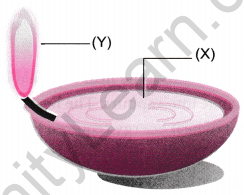 Draw the arrangement of particles of position ‘X’ and ‘Y’ when the lamp is burning.
Answer: 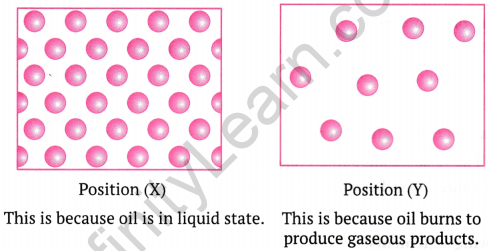 Question 2.
‘A small volume of water in a kettle can fill a kitchen with steam’. Explain why.
Answer:
The liquid form of water converts into gaseous form in steam.
Its particles move very rapidly in all the directions and fill the kitchen as gases completely fills the vessel.

Question 3.
A sample of water under study was found to boil at 102°C at normal temperature and pressure. Is the water pure? Will this water freeze at 0°C? Comment. [NCERT Exemplar] Answer:
Its freezing point will be below 0°C due to the presence of a non-volatile impurity in it.

Question 4.
You are given the following substances with their melting and boiling points.

Question 6.
The temperature-time graph given alongside shows the heating curve for pure wax. 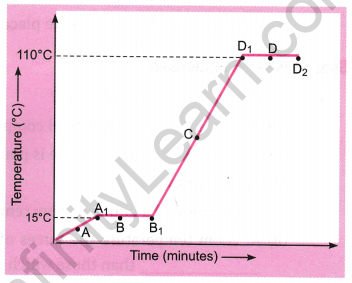 From the graph answer the following:
(a) What is the physical state of the substance at the points A, B, C and D?
(b) What is the melting point of the substance?
(c) What is its boiling point?
(d) Which portions of the graph indicates that change of state is taking place?
(e) Name the terms used for heat absorbed during change of states involved in above process.
Answer:
(a) A-Solid state,
B—Both solid and liquid states,
C—Both liquid and gaseous states
C—liquid state,
(b) 15°C
(c) 110°C
(d) A1B1 and D1D2
D1D2—Latent heat of vaporisation
(e) A1B1—Latent heat of fusion.