A Legend of the Northland Summary

The poem “A Legend of the Northland” is Chapter 5 of CBSE Class 9 English Beehive. The poem is written as a ballad and narrates a story. Ballads are a type of folk or popular culture that is passed down from generation to generation. CBSE Class 9 English Beehive A Legend of the Northland summary and explanatory notes are available here. The summary will provide students with an overview of the poetry, while the thorough explanation will assist them in understanding its meaning. To prepare for their English exam, they can use the summary and class 9 English notes. Students can also go through the gist of the poetry for a quick revision before their exams.

The Theme of the Poem 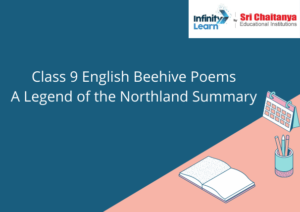 The poem “A Legend of the Northland” is a Northland folktale that has been passed down several generations. It’s a narrative of Saint Peter and the old woman who was punished for her selfishness. The story teaches us not to indulge in greed and to value traits such as compassion and empathy.

Phoebe Cary is an American poet. She is the sister of Alice Cary, who is also a poet. They have published several poetries, both together and individually.

CBSE Class 9 English Poem – A Legend of the Northland Summary

This poem tells the story of an old lady who angered Saint Peter due to her greed. The setting is the Northland, where the old lady resides. She was selfish and greedy. Saint Peter used to wander across the world giving religious speeches to people. The saint arrived at the lady’s house one day. She was making cakes at the time. Since the saint had fasted for the whole day, he was starving and feeling weak. He requested that the woman give him a single slice of cake. The woman was highly selfish. She got the impression that the cakes she had cooked were rather big. She started baking a new cake since she didn’t want to give away the big ones she had already baked. However, she soon realized that the new cake was bigger. So, she rolled out a little piece of dough and flattened it out. She made it to the size of a wafer. However, she was unable to share even that little with the saint. The saint became angry as he observed the woman’s behavior. He declared her unfit for human life and cursed her to become a bird. The woman was converted into a woodpecker as a result of the curse. She was now digging dry wood for shelter and searching the area for items to eat as birds do.

A Legend of the Northland Summary – Explanation by Stanzas

The author talks about the place where the story began in the opening two stanzas of the poem. The story starts in the chilly Northland area, where the days are short and the nights are long in winter. The people of the Northland were unable to sleep at night due to the intense cold. When it snows in Northland, the locals tie their beautiful reindeer to sledges and travel by sledge. The children are dressed in warm, furry clothing to resemble bear cubs.

The third and fourth paragraphs of the poem describe how parents in Northland tell their children a story. The poet does not believe the story is genuine, but she tells it nevertheless. The poet feels it holds a valuable lesson that we must all learn. Saint Peter was once a human being who lived on Earth. He taught about God throughout the world.

Saint Peter arrives at a cottage door in the poem’s fifth and sixth stanzas while traveling around the world. A little woman was preparing cakes in the cottage’s fireplace. Saint Peter had been fasting for the entire day and was extremely hungry and exhausted. It was almost the end of the day. Thus, Saint Peter requests a cake from the woman’s store of cakes.

The lady starts preparing a cake for Saint Peter in the poem’s seventh and eighth stanzas, but before she could offer it to him, she thinks it is too big to give away. So, the woman makes another small cake, but when she turns it over, it appears to be the same size as the original.

In the ninth and tenth stanzas of the poem, the woman grabs a little piece of dough and rolls it as thin as she could. The resulting cake was as light as a wafer, yet the woman could not give it away to Saint Peter. She says that when she ate her cakes, they appeared to be too small. Those cakes, however, were too large to be given out for free. As a result, she put the cakes on the shelf and refused to give any to Saint Peter.

Saint Peter is described as angry by the woman’s selfish behavior in the poem’s eleventh and twelfth stanzas. He was exhausted and starving. It is difficult for a compassionate and kind saint like Saint Peter to become angry, but the woman’s actions compelled him to be. Thus, Saint Peter advised her that she was extremely selfish. She was undeserving of being a human who could enjoy a happy and fulfilling life with good food and a home with a fireplace to keep her warm.

Saint Peter curses the woman and turns her into a bird in the thirteenth and fourteenth stanzas. The lady would now have to make her own nest and get her food like a bird. She had to dig holes in the hard, dry wood to find food. As a result, the woman went out of her home through the chimney without saying anything. She had been transformed into a woodpecker.

The small woman wore a red cap as a human. Only her red hat remained when she was transformed into a woodpecker, and all her other garments were destroyed in a fire. To put it another way, the woodpecker has a redhead but a black body. The poet then claims that every schoolboy has seen the woodpecker, i.e., the little woman in the forest. She still lives there, scavenging for food in the dry, hardwood.

A Legend of the Northland instills in us the values of never being selfish and always thinking of others. The poem encourages us to be generous and to help those in need if we are able. Everyone who lives in that area has seen this kind of bird in the woods, including schoolboys. She spends the entire day in the tree, digging the wood for food. Older people tell this story to their young children to teach them not to be greedy in life.

We hope that the summary and explanation of the CBSE Class 9 English Beehive A Legend of the Northland Poem help students comprehend the poem’s meaning. Students have also found it beneficial in their preparation for English exams. We’ve also provided summaries for all of the other chapters on our website to help students prepare effectively.

Read Summaries of Other Poems here –