Robert Frost was an American poet known for his practical illustrations of rural life and his command of American colloquial speech. He often reflected in his poems about different settings from rural life in New England in the early twentieth century, using them as symbols to examine complex social and philosophical themes. He is the only poet in the world to have been awarded four Pulitzer Prizes for poetry.

Introduction of the Poem 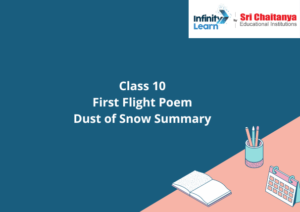 Dust of Snow is a simple poem of eight lines divided into two stanzas. Each of the stanzas in the poem follows the same simple rhyme scheme. Dust of Snow is very simple in structure, yet very poignant in content.

The way a crow

Shook down on me

The dust of snow

From a hemlock tree

Has given my heart

A change of mood

And saved some part

Of the day I had rued

The poem begins out of nowhere. The poet gives us no details of what happened that day or what he was doing in the snow. We understand from the first stanza that the poet was standing under a hemlock tree. It was the season of winter, and there was snow all around. A crow was sitting on one of the branches of a tree. When the crow made a movement, the snow fell on the poet.

In the second stanza, the poet says that this small incident made his mood light up. The poet suddenly realized that he had wasted all his time in being sad and sorrowful, and now, he should utilize his time and energy in doing something meaningful. His depression and sadness are washed away by the sprinkle of snow, and his heart is filled with happiness and joy. Through the words of the poet, we can understand that he was having a bad day and the way the crow shook the snow over the poet made his day. He found the simple joys in life worth cherishing.

Poetic Devices in the Poem

The poet has employed an ABAB rhyme scheme in the poem. Here are some of the poetic devices he has used:

Enjambment: Enjambment is the poetic device of the continuation of a sentence without a pause beyond the end of a line, couplet, or stanza.

For example, both the stanzas of the poem are a single sentence in four lines without any punctuations.

Assonance: It is the repetition of vowel sounds in a line of verse. For example, the ‘o’ sound in ‘shook down on me’.

Alliteration: This poetic device involves the repetition of the same consonant sounds at the beginning of words that are in close proximity to each other. For example, the ‘h’ sound in ‘has given my heart’.

Critical Analysis of the Poem

The Message of the Poem

Robert Frost through the poem, Dust of Snow, tries to make us understand that every bad situation has something positive about it. Instead of being sad about the situation, we should always try to be optimistic and find the positive.

The poem Dust of Snow is the perfect depiction of what life is or can be. Everything in our life depends on us and our thoughts. Our choices and thought processes will decide whether we will be happy or not. The poet was suffering from pain and sorrow and witnessed a bad omen under a hemlock tree. Despite that, he chose to see the positive in his surroundings, to notice the small joys that make everyday life worth living. The tiniest indication from nature made him realize how beautiful life really is.

A hemlock tree is considered to be a poisonous and toxic tree to human beings in different relations. Despite being a poisonous tree, the poet chose to sit under it as he was not in a good mood. The poet saw a black crow sitting on one of the branches of the tree. Crows are considered to be bad omens as they are messengers of death. The poet was in a bad mood, and one small gesture by nature made him realize that his life is so beautiful and he should not waste his time being sorrowful.

According to the poem Dust of Snow, the poet chose to see the positive side of the tree and the black crow. The random act of nature made the poet move on. He concluded everything positively and decided to move on by bringing a change in his life.

Enjoyed this summary? You can read more of them on our website or find a treasure trove of resources like CBSE notes, study materials, chapter summaries, and more.