Two Gentlemen of Verona is a touching drama about human connections and familial ties. In this narrative set in Italy during World War II, two brothers from Verona, Nicola and Jacopo, look after their sister Lucia, who is suffering from tuberculosis.

The lads are destitute and dressed shabbily. Their father was a well-known vocalist and a dedicated worker who perished in the war. In the absence of their father, the boys gladly accept the task of caring for their sick sister. 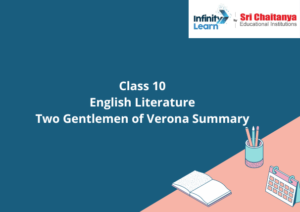 The narrator was stopped by two tiny boys selling wild strawberries while traveling through the foothills of the Alps on his way to Verona. The lads were dressed shabbily in out-of-season clothing that was too big for them. The two were dark-skinned and frail, with tangled hair and solemn expressions in their black eyes. Despite their driver’s best efforts, the narrator and his friend purchased the largest basket of strawberries the guys had for sale because they were drawn to them. The two guys were cousins. Nicola, the older, was 13 years old, and Jacopo, the younger, was almost 12 years old. The narrator discovered the two brothers shining shoes outside their hotel the following day. The two lads told him that they worked as tour guides in addition to harvesting fruit and cleaning shoes.

He noted the youngsters were childish and naïve as they took the narrator and his companion around town. Even though Jacopo was active and Nicola had a lovely smile, both youngsters appeared solemn.

During the week the narrator and his partner spent in Verona, they frequently encountered the youngsters who were always willing to help the two men with their work.

They were shocked to see the guys resting on the stone sidewalk beneath the lights in the windy and desolate square one night. Nicola sat straight, although he appeared sleepy, while Jacopo slept with his head resting on his brother’s shoulder. They were waiting for the last bus from Padua in order to sell papers.

The narrator was taken aback by their dedication and asked if he could assist them with some cash before he left for the United States on Monday. Nicola denied the offer but accepted the narrator’s offer of assistance, agreeing to drive them there in his car.

Later, the author is led by a priest to a magnificent red-roofed home, which he characterizes as a gigantic structure.

When he rings the doorbell, a nurse opens it and walks him inside, where he finds the brothers seated next to a young woman who seems like their sister based on her resemblance to them.

The youngsters, who had always lived in an affluent and cultured environment, suffered from a lack of food and exposure to the elements. For months, they lived in a makeshift shelter amidst the wreckage that they had constructed with their own hands. The boys came to despise the Nazis and were among the first to join the resistance. They returned to their adored sister Lucia once the war ended and peace was restored.

The boys were not about to give up. They rushed her to the hospital. Lucia had been in the hospital for a year and was progressing well. She’d walk and sing one day again. Meanwhile, the brothers were struggling to pay for her therapy.

Their unselfish actions instilled a new sense of dignity in human existence and offered hope for the future, he said.

Ques: Why didn’t the driver, Luigi, like the two boys?

Ques: Why were the two youngsters so impressive to the narrator and his companion?

Answer: The genuineness and honesty they witnessed in the youngsters’ warm, open features drew the narrator and his colleague in. They were blown away by the sincerity and sincerity they saw in their dark eyes.

Ques: Why was it surprising to the author to find Nicola and Jacopo working as shoeshine boys?

Answer: The narrator had seen the two youngsters, Nicola and Jacopo, as fruit pickers and sellers the day before. As a result, he was taken aback when he saw them working as shoeshine boys in the town plaza the next day.

Ques: What role did the lads play in the author’s life?

Answer: Nicola and Jacopo assisted the narrator with several tasks, including obtaining a pack of American cigarettes, opera tickets, and the name of a fine restaurant where they could eat. They also took him on a tour of the city to show him around.

Ques: The boys are evasive when the narrator inquires about their plans. Why don’t they come out and say what’s bothering them?

Answer: The lads were respectful and self-sufficient. They didn’t want anyone to feel sorry for them. They tried to take care of their duties independently, so they were evasive when the narrator assumed they were saving money to go to America. They didn’t want him to know about their sister, who was disabled.