Matthew Arnold’s poem ‘Dover Beach’ was published in the volume ‘New Poems’ in 1867. This poem is divided into four stanzas, each with a different number of lines. They can be anything between fourteen and six lines long. There is no rhyme scheme, however, the poem is written in irregular iambic pentameter and has a variety of random end rhymes such as “-and” and “-ay.”

‘Dover Beach’, a dramatic monologue by Matthew Arnold, laments the loss of true Christian faith in England during the mid-nineteenth century as science captured the public’s mind. The poet’s speaker, who is thought to be Matthew Arnold himself, starts by describing a calm and peaceful sea in the English Channel. He stands on the Dover coast, looking across to France, where a small light appears for a brief while before vanishing. This light depicts the fading faith of the English people and of the rest of the world. The speaker (Arnold) creates an image of the sea receding and returning to land with the world’s religion as it changes over time in this poem. However, the sea is not returning at this point. It’s receding further into the strait.

Faith used to engulf the entire world, collecting the population in its embrace. It is now, however, losing ground to the sciences, particularly those concerning evolution (The Origin of Species by Charles Darwin was published in 1859). The poem ends on a pessimistic note, with the speaker emphasizing to the reader that all the beauty and happiness they may believe they are experiencing is not genuine. The world is devoid of peace, joy, or support for those in need, and the human race is too preoccupied with its ignorance to see where true help is needed. 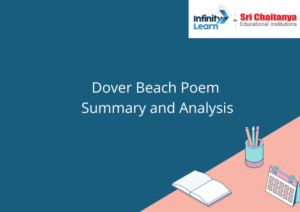 Arnold begins by describing the setting in which the poem is situated. Although it is never stated clearly in the poem, it is evident from the title that the beach in question is Dover on the English coast. The sea is considered to be tranquil. The moon “lies fair” lovely, upon the straits”. Although it is useful to visualize the speaker in a certain place, the setting is less important than what it represents.

The lights on the far coast gleam visibly and then they disappear, leaving the “cliffs of England” standing alone in the bay. The light that shines suddenly vanishes, symbolizing the fading faith of the English people. The night is silent, and no one around him appears to notice the enormity of what is going on. The speaker describes the calm as “tranquil”. However, as the reader will discover, many things appear to be one way but are the opposite.

Now the speaker turns to another person in the scene and requests that this unnamed individual come to the window and breathe the “sweet…night-air!”. The speaker spends the second part of this stanza describing the sounds of the water he is looking at. The speaker directs the listener’s attention to the sound made by the sea as it rushes in over the pebbles on the shore. “The grating roar” is created as they roll over one another. As the sea recedes and returns, this happens again and again. The narrator finds the slow pace of this movement, as well as its endless repetitions, sorrowful.

The second stanza is significantly shorter and connects the two characters’ world to the bigger picture of history. The speaker claims that Sophocles heard this sound on the Ægean sea when the tides came in “long ago”. It reminded him of the emotions of “human misery” and how they “ebb and flow”. Arnold hopes to draw the reader’s attention to the universal experience of misery that people have had throughout history. The narrator returns to the present in this short stanza, stating that “we” are experiencing the same emotions in the sound.

Here, it becomes evident that Arnold is referring to his countrymen and women’s diminishing faith. “The Sea of Faith” once encompassed the entire “round earth’s shore” and tied everyone together like a girdle, according to him. However, this period has now gone. The populace is no longer connected by a shared Christian trust in God, but rather, as Arnold sees it, by new sciences and conflicting opinions. There is no longer any return of the water of the sea when it used to draw away and come back to the shore. “Melancholy” and “long”, the sea is now just receding. It is retreating from England and the rest of the world’s countries, leaving people vulnerable.

The companion who is staring out over the river with the speaker at the beginning of the fourth stanza is most likely a lover or romantic partner. He is now speaking directly to her, and potentially to all the remaining true believers in God. In this “land of dreams”, he requests that they stay committed to one another. The world has changed; it now resembles a dream rather than the reality he is used to.

Conclusion
The poem concludes with a pessimistic judgment on the state of the world. Real suffering and faith are fading away as people throughout the world suffer on “a darkling plain”, confused and fighting for things they don’t understand.