Poems are creative pieces of writing. With the help of poems, writers try to convey a deeper meaning in only a few words. In the book, Honeydew, different poets try to express their ideas and emotions with the help of some beautiful poems.

This way, students can enjoy the poems, learn new things about the world, and expose themselves to distinct ways of thinking. The Honeydew book of class 8 contains eight well-written poems in total.

Here is a summary of all the poems. Reading these will help you spark an interest in the craft of composing and interpreting poetry. 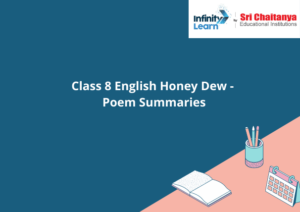 Poem 1: The Ant and the Cricket

The book’s first poem is about an ant who works hard all day in the summer season and stores ample food for the winter season. On the other hand, a cricket simply enjoys the seasons by singing instead of storing food for winter.

The second poem of the book, Honeydew, tells us the importance of water for different purposes. The poet of this poem is Zulfikar Ghose, who was born in India but settled in Pakistan after the partition. Living in the USA now, he finds the cities are not well-planned when he sees them from above in a jet. The poet also talks about the importance of water.

The third poem of the book revolves around the mysterious abilities of a cat named Macavity. He is very secretive and escapes from the crime scene every time.

The fourth poem is about a man searching for a job. But during this search, he comes to learn some important lessons. The poem tries to teach us that we do not need money, beauty, or power for everlasting happiness. Innocence and freedom are enough to make a person satisfied and happy.

The fifth poem of the book is about a schoolboy who is not happy as he doesn’t like to go to school daily and is not interested in studying. He thinks that he is trapped like a bird and his childhood is crumpled. The boy further advises parents not to steal their kid’s freedom and happiness.

Poem 6: This is Jody’s Fawn

The sixth poem of Honeydew is a very touching poem about a child named Jody. When a snake bites his father, he kills a doe in order to save his father’s life. But now, he is concerned about the fawn who is left behind. His parents search for the fawn in the forest and bring it home. Jody is thrilled that the fawn is safe.

Poem 7: When I Set Out for Lyonnesse

The seventh poem of the book is about poet Thomas Hardy’s visit to the parish church as an architect. He went there to supervise the restoration of the church. When he returned, people noticed two things about the poet: a new glow in his eyes and a piece of paper in his pocket.

Poem 8: On the Grasshopper and the Cricket

The eighth poem of the book is about a grasshopper and a cricket. Both are used to symbolize the summer and winter seasons. This beautiful poem talks about how the poetry of the song continues from the summer to the winter season.