A Short Monsoon Diary gives us a glance into Ruskin Bond’s diary, which he wrote and kept. A diary is a written record of one’s daily events over a long period of time. Ruskin Bond wrote in his diary about nature’s silent miracles when the mountains received monsoon showers. Mussoorie’s monsoon season begins in the final week of June and lasts until the end of August. In October, the cold showers are welcomed until the last darkest cloud appears in March, clearing the sky for the rainbow when it hails. 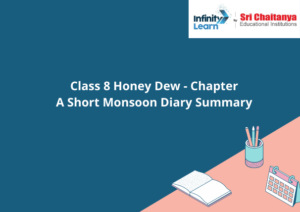 The lesson gives us a glimpse into Ruskin Bond’s diary, and the first day discussed is June 24, the start of the monsoon season. He talks about how the mist muffles the birdsong and obscures the hills, rendering everything invisible. By June 25, humidity has set in as they start to receive early monsoon showers. From the ponds, the first cobra lily rears its head. The author characterizes the hill station and valley as “A paradise that might have been.” The presence of a few seasonal visitors, such as leopards, leeches, scarlet minivets, and drongos, is also signaled by the rains. There is plenty of food for the insect-eating birds thanks to the rain. On August 2, he writes how the rain lasted all night. The leaking tin roof gave him the impression of being wet, despite being completely dry.

Mussoorie had been receiving rainfall for eight to nine days straight by the eleventh day of August. They didn’t have anywhere to go. The only thing one could do was pace around the room or gaze out the window. The lush monsoon growth peaked on the last day of August. The lily cobra’s seeds turning red indicated that the rains were about to finish and that the ferns would begin to turn yellow. The winter rains arrive in October, sending snow to the higher elevations.

The end of the winter period in the hill station comes in late March, when the dark clouds appear, allowing for the production of a rainbow after it has showered and the sky has cleared.

Ques: Why is it that the author can’t see Bijju?

Answer: The author can’t see Bijju since the hills are obscured by mist. He could only hear Bijju as a result.

Ques: When the mist comes up, how do the hills appear to change in two ways?

Answer: When the mist rises, the author outlines two ways in which the hills appear to shift. For starters, the fog hides the hills. Second, it silences the singing birds, resulting in trees that were ringing with birdsong an hour ago becoming deathly still as if it were midnight.

Ques: When do the monsoons start, and when do they end? How do you prepare for the monsoon season?

Ques: In this diary entry, the author describes which hill station?

Answer: In his diary, the author recalls the monsoon and a portion of the winter season in Mussoorie and Landour.

Ques: How many days has it been raining non-stop? What is the author’s current occupation?

Answer: It rained for over eight to nine days without stopping. There was nowhere to go, so the author passed the time by walking up and down the room and staring out the window at a few bobbing umbrellas.

Ques: Where do snakes and rodents seek refuge? Why?

Ques: Examine the entries for June 24-25, August 2, and March 23 very carefully. Now, as the rains advance from June to March, make a list of the changes that occur.

Answer: The birds became silent, and the forest grew deathly calm as if it were midnight as the mountains experienced the first day of monsoon fog, perhaps in the last week of June. Not only that, but the mist also obscured the hills. The plants were aware of it, and the first cobra lily emerged from the ferns. The author was kept awake by a downpour in the hills the night before August 3, but he couldn’t keep himself from sleeping as well. As March approached, the hills were blanketed in heavy clouds. It rained marbles for a long time before clearing the sky to allow the rainbow to develop.

Ques: What clues can we find in nature that indicate the monsoon season is coming to an end?

Answer: By the end of August, nature displays several signals that the monsoon season is coming to an end, such as the lush monsoon growth reaching its height. The cobra lily’s seeds turn red. In contrast to their sturdy, green, and erect form, the ferns begin to become yellow. On the grassy slopes of Landour, ground orchids, mauve lady’s slippers, and white butterfly orchids put on a fashion show. Red, yellow, and magenta wild dahlias rear their heads from the rocky nooks where they’ve taken root.