What Do We Understand By Economy & Infrastructure?

A nation is not formed by drawing lines on the map and giving it some name. It is formed by the incessant efforts of our ancestors and the army who constantly devote themselves to the nation. There are plenty of people giving their bits to the country so that the glory of the nation doesn’t fade away. Similarly, the role of economy and infrastructure is immense in deciding the worth of a country.

Let’s understand the two terms based on their literal meaning. Economy means the overall goods produced by a region or country and the consumption of those goods by people through purchasing power, i.e. money. It directly relates to the supply of money and proper management of the existing resources. On the other hand, infrastructure means physical structures like homes, buildings, offices, roads, highways, etc. So everything made as a means for either shelter and connectivity is a part of the infrastructure.

What is the Common Link Between Economy & Infrastructure?

Infrastructure directly contributes to the nation’s economy. The condition of a country’s infrastructure has an indelible impact on the growth of the economy. It is quite understandable. Look at a country with raw houses and thousands of homeless people sleeping on the roadside; what does it signify? Will it not have a negative influence on the economy? Of course, it will prove detrimental to a country’s growth and hence the economy. 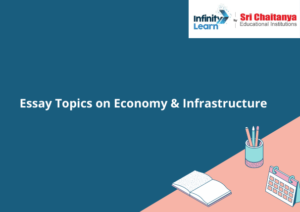 So why wait so long? Binge into our collection of essay topics on economy & infrastructure and firm your grasp on these two subjects:

There you go! We know how you are taken aback when someone asks you about the country’s GDP or economic issues. Fear no more! If you have gone through these topics, say bye-bye to your fear. Be confident and know your country well. We will see you in our next article. Till then, stay tuned and enjoy reading!