William Sydney Porter, better known as O. Henry, was an American writer. His short stories are renowned for their wit, wordplay, humor, and twist endings. He was born in Greensboro, North Carolina on September 11, 1862. Algernon Sidney Porter, his father, was a medical doctor. His mother died when he was three years old, and he was raised by his grandmother and aunt. He dropped out of school at the age of 15 and worked a variety of jobs. He was charged with embezzlement in 1896 and received a five-year prison sentence. While imprisoned, he began writing short stories, and his first published story, Whistling Dick’s Christmas Stocking, was published in 1899. He used the pseudonym Olivier Henry to conceal his identity because he did not want his readers to know he was in jail. While incarcerated, he had twelve stories published.

Because of his good behavior, he was only incarcerated for three years. In 1902, he moved to New York City and began writing a weekly story column for the New York World. Cabbages and Kings was his first story collection, and The Four Million was his second. His success put him under a lot of pressure, and he became addicted to alcohol. On June 5, 1910, he died in New York from liver cirrhosis.

‘Hearts and Hands,’ like many of O. Henry’s short stories, has a surprising ending. The story Hearts and Hands’ by O. Henry is about a chance meeting between two acquaintances on a train. It revolves around three main characters and two supporting characters. The story’s supporting characters, who make a huge contribution to the plot, are revealed at the end. The entire story is set on a train to Denver, and all of the action takes place in one of the coaches, where a young, beautiful, and elegantly dressed lady named Miss Fairchild is seated. Two men, Mr. Easton and a Marshal arrive and take the seat in front of her. Mr. Easton is not on an ordinary journey he is on his way to prison. The marshal who is accompanying him performs an act of kindness in order to save him from being embarrassed in front of his pretty lady friend. Both Easton and the marshal lie in the spur of the moment to save face in front of Miss Fairchild, who ends up being impressed with Mr. Easton. The conversation of two adjacent passengers reveals the truth. 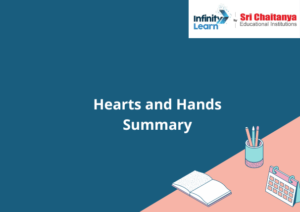 Miss Fairchild was dazzled by Easton’s promotion to marshal. Easton also didn’t waste any time impressing Miss Fairchild. He justified his actions by stating that he needed to work to support himself. He needed to survive in the West, so he took this job. Mr. Easton also tried to taunt Miss Fairchild by mentioning an ambassador, with who she must have been involved, in order to find out more information about her personal life by saying, “Marshalship isn’t quite as high a position as that of ambassador.” To which Miss Fairchild immediately stated that she did not like the ambassador and that she is no longer in contact with him. This was her way of saying the ambassador had no chance against Easton and she was more concerned with his personal life. She asked him if he missed the East or if he was content in being a daring hero in the West. She took another look at the handcuffs. The real marshal observed this and could read her mind. He convinced her that Mr. Easton knew exactly what he was doing as a marshal. She inquired as to whether Easton planned to visit Washington anytime soon. They continued the conversation by exchanging opinions about the West. They seemed to enjoy their little conversation. It also indicated their concern for one another as friends. The dejected man interrupted their conversation once more. He asked Easton to take him to the smoke room. He hadn’t had a cigarette all day and was craving one. Mr. Easton boasted about his status as a marshal in front of Miss Fairchild, claiming that he could not refuse duty calls. They say their goodbyes and depart. Miss Fairchild was disheartened by Easton’s departure.

Two passengers sitting nearby had overheard the entire conversation, and one of them commented that Mr. Easton appeared to be too young to be a marshal. The other passenger deduced that Mr. Easton was the forger. He solicited whether an officer had ever handcuffed his right hand with a prisoner. The situation is unexpected by the readers and adds to the mystery. It also manages to convey that Miss Fairchild was misled by a relatively insignificant observation, contributing her to believe that Mr. Easton was the marshal when, in fact, he was the one being taken to prison.

This story probes us to look at the irony in front of the reader. Mr. Easton, who is handsome and attractive, is a criminal, whereas The Marshal is a dejected, rough-looking, heavily built man. Which is why, when the real Marshal informs the lady that he is the criminal and is being taken to prison by Mr. Easton, the Marshal, she believes him right away. She is oblivious to the fact that Easton’s right hand is cuffed, which is only noticed by their co-passengers.