“Kubla Khan” is widely regarded as one of the best poems of Samuel Taylor Coleridge, an English Romantic poet who claimed to have written the strange and hallucinatory poem quickly after waking up from an opium-influenced dream in 1797. The speaker imagines the landscape surrounding the Mongol ruler and Chinese emperor Kubla Khan’s summer residence, named “Xanadu,” in the first section of the poem, characterizing it as a place of beauty, pleasure, and violence. The speaker implies that these qualities are profoundly intertwined, and in the last stanza, announces a wish to build his or her own “pleasure-dome” through song. Coleridge’s poem is one of his most well-known, and it has been interpreted in a variety of ways. Overall, it’s possible to interpret it as a statement about poetry’s creative ambitions—as well as its limits.

The famous love poem Kubla Khan is explained briefly in this Kubla Khan summary. Kubla Khan is described in the poem as a powerful ruler with great command. His authority stems from the fact that he can have a pleasure dome created with only one order. Since it is made out of ice caves, this pleasure dome is nothing short of a miracle.

It’s even more miraculous that it may be found in a sunny area. As a result, the Kubla Khan summary characterizes this unique dome. It also depicts the isolated land cape of Xanadu wonderfully. Green sunny spots, beautiful gardens, blossom-laden trees, and much more may be found in the poem. The simple description of the region in the Kubla Khan summary might help you imagine the beautiful vision of the land. 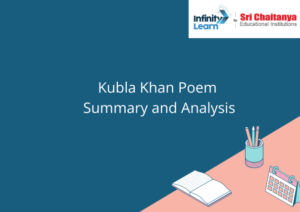 Kubla Khan summary discusses Samuel Taylor Coleridge’s poem. It’s a fragment of a dream he had after reading a book on Kubla Khan. He vividly imagines and depicts a palace he learned about in a book.

The author imagines Kubla Khan in the city of Xanadu in the first stanza. He sits there, commanding from the top of his magnificent palace dome. A massive river of Alph flows through the enormous chambers, mingling with the sea.

The capital, which has stunning gardens with a streamlet and scented plants, is protected by tall towers and walls. The ancient forests covered in lush trees with sunlight shining on them are likewise described in the Kubla Khan summary.

In addition, the second stanza takes us on a journey into a more in-depth imagination, portraying heavenly creativity. A rift runs through the sloping hill with green flora, and mosses cover it. He compares it to a woman’s cry in the memory of the wild and natural love for her demonic lover. This rift vibrates constantly as if the earth were furiously breathing through it.

In addition, there is a holy river that flows in a zigzag pattern through the woods and valley. The next stanza brings together human and divine creativity.

As a result, artifacts are created. Kubla Khan can hear the voices of his ancestors, who are foretelling the impending war. The poem also portrays the floating in the air shadow of the luxurious palace dome.

Due to the sunny location and the coexistence of an ice cave, the poet portrays it as a miracle. Finally, the poet describes a dream in the final stanza. He notices a damsel who is playing a musical instrument.

She is a black girl from Ethiopia, probably. She sings for Mount Abora while playing her instrument. This astonishes the poet, who declares that he is incapable of reviving her symphony and sound in him.

This is unusual because he regards her as superior, which was unusual back then. He aspires to be able to create the dome-like pleasure-dome with the same symphony as the girl. Thus, he will become more beautiful and appealing to the audience.

He hopes that it would result in the audience enjoying and admiring his poems. As a result, they’ll be able to visualize things as vividly as he does. By building the dome and having the symphony, they would reach heaven.

Through its vivid depiction, the Kubla Khan summary leads us through the wonderful region of Xanadu. It studies the theme of the relationship between man and nature. It is a beautiful romantic poetry that emphasizes humans and natural elements.