The Summer of the Beautiful White Horse Summary

Characters of the Story:

Aram (Narrator of the Story): He’s a nine-year-old boy. He and his cousin Mourad are Garoghlanian tribe members. He feels Mourad’s theft of the horse for the purpose of horseback riding is justified because they had no intention of selling it.

Mourad: He is Aram’s 13-year-old cousin. He is a vibrant and rambunctious individual who adores his cousin Aram, to whom he offers the horse to ride for a while. He knows how to ride a horse. 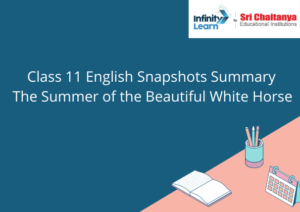 The Summer of the Beautiful White Horse Summary:

Aram and Mourad were two poor lads from the Armenian Garoghlanian family, who had a reputation for honesty dating back to the eleventh century. Mourad, Aram’s cousin, arrived at his window with a lovely white horse one early morning while Aram was sleeping and dreaming happily. Aram couldn’t believe what he was seeing and thought it was a dream. But, because there was a sliver of light outside, he was certain the horse was real. He couldn’t believe the horse was theirs, given their financial situation. He was attempting to figure out if his cousin had taken the horse. Mourad had come to take him along for a trip. He asked him to come quickly before the rest of the world awoke. Aram leaped out of the window, dressed, and sat behind Mourad on the horse.

They rode along Walnut Avenue, which ran through the historic farmland of the area where they lived. Mourad asked him to dismount after a while since he wanted to ride the horse alone. Aram inquired if he could ride the horse alone like him, to which Mourad said that they will look into it because it was for his own protection. Mourad had kidnapped the horse a month before and was riding it every morning, he discovered.

When Aram was given the opportunity to ride, the horse took him to the vineyard, flung him off, and fled. Mourad finally found the horse after a thirty-minute search, and they concealed him in an abandoned vineyard with some oats and hay. Mourad had a way with animals, particularly horses. He knew how to deal with all kinds of animals, as well as humans. They would ride the horse every morning for two weeks and then hide it again.

Then one day, farmer John Byro came to Aram’s house to speak with his uncle Khosrove, who was ill-tempered and yelled at virtually everything. Byro informed him about his missing horse, which he had purchased for $60. He couldn’t find it for a month and had to trek 10 miles to get to their house. “It’s no harm, pay no mind to it”, Khosrove screamed at him. Byro grew angered by his behavior and left.

Aram went to Mourad and informed him of Byro’s missing horse, requesting that he not return it until he had learned to ride it. Mourad estimated that learning to ride a horse would take him a year. He went on to say that they couldn’t possibly be thieves because their tribe is known for its honesty and that they would return the horse in six months.

On their way back to the hiding site to hide the horse, they met John Byro, who was returning to town. He conversed with them and examined the horse with care. He admitted that the horse looked just like his, but he didn’t think that they had his missing horse because he knew his parents and their family’s honesty. He assumed it was a doppelganger. Mourad was able to convince Byro that it was not his horse, and they were able to flee. The horse was returned to Byro’s vineyard and put in the barn the next morning by both of them. The dogs silently followed them all the way out of the area.

John Byro returned home later that day to inform his mother of his horse’s return. He was overjoyed and amazed to observe the horse’s improved temperament and strength. Uncle Khosrove shouted at him again to be quiet and not keep talking about his horse now that he got it back.

Ques: You’ll likely agree that this novel lacks a pulse-pounding adventure and thrilling action. So, what do you think makes it fascinating in your opinion?

Answer: Although the novel lacked spectacular action and frantic thrills, it did contain suspense, which kept the readers engaged. It was a wonderful story, and both boys were eager to try something new. They both longed to ride a horse because their family was poor. Mourad took it, and the two of them rode it for a long time. They returned it to its original location and owner once their game was completed.

Ques: Was it because the boys were conscience-stricken or because they were terrified that they returned the horse?

Answer: The boys returned the horse not out of fear, but because it was against their conscience. Despite the fact that their family was known for its honesty, they had stolen the horse months before. The horse was with them when they encountered John Byro on his way to town. He studied it closely and stated that it seemed identical to the one he had as if it were a twin. It felt like his own horse was being carried, but he didn’t believe it was because he knew his parents. The boys were struck by this and decided to return the horse to the farmer’s vineyard to be put in the barn.

Ques: “Back when I was nine, life was still a fascinating and mysterious dream, and the universe was full of every imaginable form of magnificence…” The narrative opens with a nostalgic tone. Can you tell me about an event from your childhood that you think would make a good story?

Answer: No one can stop oneself from going down memory lane after reading such lines. I recall being twelve years old at the time. I used to go to my grandmother’s house, which was in a hill station. My entire summer vacation would be spent with them. We’d go to the market for delectable snacks, go shopping, and watch TV collectively. I recall once spending a month at a summer camp. They would drop me off at the location and return to pick me up once the classes were finished. My grandmother would occasionally bring me a packed lunch. I’d eat it as quickly as we could go shopping thereafter. When I had to return to my house to return to school, I was always upset.

Ques: What moral lesson do you take away from the story of the lovely white horse’s summer?

Answer: The moral of the story ‘The Summer of the Beautiful White Horse’ by William Saroyan is that compassion in the midst of conflict allows for both growth and fair compromise.

Ques: What is the major message of ‘The Summer of the Beautiful White Horse’?

Answer: The main theme of ‘The Summer of the Beautiful Horse’ is that, despite social or economic hardships, there are some absolute truths that should be practiced regardless of the circumstances. In the case of Mourad and Aram, it was the fact that they decided to uphold the sanctity of their tribe’s truthful identity by returning John Byro’s horse to him.