The Way of the World by William Congreve Plot Summary

The Way of the World summary dives into the play in brief. This is a Comedy of Manners. Moreover, it takes a satirical look at the upper classes’ approach, mannerisms, and flaws. Deception, greed, and love are all prominent themes in the way of the world summary. Mirabell and Millamant, two lovers, must find a method to marry one other without losing their inheritance. It’s filled with characters who are linked to one another in some way. Further, it reveals some of the characters’ dark secrets.

Mirabell and Millamant want to marry, but they know Millamant’s aunt, Lady Wishfort, would not let them. They need her permission to inherit the fortune that is in her hands. As a result, it provides an interesting perspective on the lengths to which the couple will go to achieve the same by any means necessary. 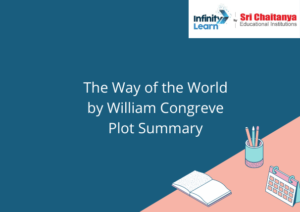 The Way of the World Summary

[The following events are assumed to have occurred before the play’s action begins.]

Mrs. Fainall, the widowed daughter of Lady Wishfort, has had an affair with Mirabell, a young man-about-town who appears not to be wealthy. To protect her from embarrassment in the case of pregnancy, he has arranged her marriage to Mr. Fainall, a man he believes has a decent enough reputation to be an acceptable match, but not so good that deceiving him would be unfair. For his side, Fainall married the young widow because he desired her fortune to sustain his relationship with Mrs. Marwood. Mirabell’s affair with Mrs. Fainall ended over time (though it isn’t stated explicitly), and he fell in love with Millamant, Lady Wishfort’s niece and ward, and the cousin of his former mistress.

However, there are financial issues to consider. Millamant had authority over half of her inheritance, but the other half, 6,000 pounds, was in the hands of Lady Wishfort, who promised to give it to Millamant provided she married a suitor approved by her aunt. Lady Wishfort had been offended by Mirabell’s flattery, which she had misread as love.

As a result, Mirabell has prepared a complex plan. He has planned for his servant, Waitwell, to woo and win Lady Wishfort as a false uncle. Then, by rescuing her from this misalliance, Mirabell plans to disclose the true status of the successful wooer and secure her consent to his marriage to Millamant. Waitwell was supposed to marry Foible, Lady Wishfort’s maid, before the masquerade so that he wouldn’t be able to hold Lady Wishfort to her contract; Mirabell is too much a man of his time to trust anybody in terms of money or love. Millamant is probably aware of the plot because of Foible.

Then, the play begins;

The play opens with Mirabell and Fainall playing cards. Mirabell is approached by a man who informs her that his servant, Whitwell, and Lady Wishfort’s servant, Foible, have married. As a result, Mirabell tells Fainall about his feelings for Millamant.

Mirabell also learns that Millamant would lose the fortune she was to inherit from her aunt on Lady Wishfort’s marriage. Thus, they can only get the money if Lady Wishfort agrees to marry them. Mrs. Fainall and Mrs. Marwood discuss their dislike for men in the second act of the way of the world summary. Fainall appears out of nowhere, accusing Mrs. Marwood of being in love with Mirabell.

In the meantime, Mrs. Fainall tells Mirabell how much she despises her husband. As a result, they hatch a plan to trick Lady Wishfort into agreeing to the marriage. Foible then appears, urging Lady Wishfort to marry Sir Rowland (Whitwell in disguise).

Thus, the main goal is to trap her in a marriage that will not take place since it would be bigamy and a social disgrace due to class differences. Thus, if she accepts the marriage, Mirabell will provide her with a hand in sorting things out.

Mrs. Marwood overhears Mrs. Fainfall’s conversation with Foible about this plan. She tells Fainall about the plan, who has chosen to elope with Mrs. Marwood using Mrs. Fainall’s money.

Further, Millamant accepts Mirabell’s proposal in the way of the world summary. Lady Wishfort comes as Mirabell leaves, telling Millimant that she wants her to marry her nephew, Sir Wilfull.

After then, Lady Wishfort gets a letter from Sir Rowland revealing the plot. He goes on to accuse Mirabell of harming their wedding. As a result, Whitewell is arrested by Fainall. Mrs. Marwood is thanked by Lady Wishfort for disclosing the plot. Then we witness Fainall using information from Mrs. Fainall’s former affair with Mirabell, as well as Millimant’s blackmailing contract with Lady Wishfort. He advises her not to remarry and to give him her fortune.

Mirabell, on the other hand, comes to her help to save her reputation and money. As a result, the blackmailing stops and everything returns to normal. Millamant finally receives her inheritance as well as permission to marry Mirabell.

The Way of the World summary focuses on marriage, adultery, and inheritance. It delves into the human mind and its willingness to achieve what they want by any means.