• Inter molecular Force
In a solid, atoms and molecules are arranged in such a way that each molecule is acted upon by the forces due to the neighbouring molecules. These forces are known as inter molecular forces.
• Elasticity
The property of the body to regain its original configuration (length, volume or shape) when the deforming forces are removed, is called elasticity.
• The change in the shape or size of a body when external forces act on it is determined by the forces between its atoms or molecules. These short range atomic forces are called elastic forces.
• Perfectly elastic body
A body which regains its original configuration immediately and completely after the removal of deforming force from it, is called perfectly elastic body. Quartz and phospher bronze are the examples of nearly perfectly elastic bodies.
• Plasticity
The inability of a body to return to its original size and shape even on removal of the deforming force is called plasticity and such a body is called a plastic body.
• Stress
Stress is defined as the ratio of the internal force F, produced when the substance is deformed, to the area A over which this force acts. In equilibrium, this force is equal in magnitude to the externally applied force. In other words,

• Stress is of two types:
(i) Normal stress: It is defined as the restoring force per unit area perpendicular to the surface of the body. Normal stress is of two types: tensile stress and compressive stress.
(ii) Tangential stress: When the elastic restoring force or deforming force acts parallel to the surface area, the stress is called tangential stress.
• Strain
It is defined as the ratio of the change in size or shape to the original size or shape. It has no dimensions, it is just a number.
Strain is of three types:
(i) Longitudinal strain: If the deforming force produces a change in length alone, the strain produced in the body is called longitudinal strain or tensile strain. It is given as:

(ii) Volumetric strain: If the deforming force produces a change in volume alone, the strain produced in the body is called volumetric strain. It is given as:

(iii) Shear strain: The angle tilt caused in the body due to tangential stress expressed is called shear strain. It is given as:

• The maximum stress to which the body can regain its original status on the removal of the deforming force is called elastic limit.
• Hooke’s Law
Hooke’s law states that, within elastic limits, the ratio of stress to the corresponding strain produced is a constant. This constant is called the modulus of elasticity. Thus

• Stress Strain Curve
Stress strain curves are useful to understand the tensile strength of a given material. The given figure shows a stress-strain curve of a given metal. 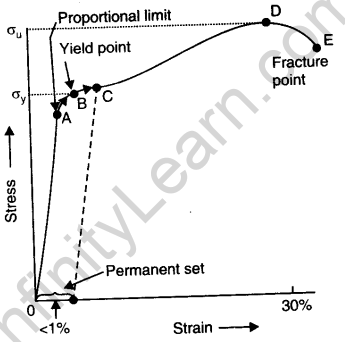 • The curve from O to A is linear. In this region Hooke’s Proportional limit law is obeyed.
• In the region from A to 6 stress and strain are not . proportional. Still, the body regains its original dimension, once the load is removed.
• Point B in the curve is yield point or elastic limit and the corresponding stress is known as yield strength of the material.
• The curve beyond B shows the region of plastic deformation.
• The point D on the curve shows the tensile strength of the material. Beyond this point, additional strain leads to fracture, in the given material.
• Young’s Modulus
For a solid, in the form of a wire or a thin rod, Young’s modulus of elasticity within elastic limit is defined as the ratio of longitudinal stress to longitudinal strain. It is given as:

• Bulk Modulus
Within elastic limit the bulk modulus is defined as the ratio of longitudinal stress and volumetric strain. It is given as:

– ve indicates that the volume variation and pressure variation always negate each other.
• Reciprocal of bulk modulus is commonly referred to as the “compressibility”. It is defined as the fractional change in volume per unit change in pressure.
• Shear Modulus or Modulus of Rigidity
It is defined as the ratio of the tangential stress to the shear strain.
Modulus of rigidity is given by

• Elastic Fatigue
It is the property of an elastic body by virtue of which its behaviour becomes less elastic under the action of repeated alternating deforming forces.
• Relations between Elastic Moduli
For isotropic materials (i.e., materials having the same properties in all directions), only two of the three elastic constants are independent. For example, Young’s modulus can be expressed in terms of the bulk and shear moduli.

• Breaking Stress
The ultimate tensile strength of a material is the stress required to break a wire or a rod by pulling on it. The breaking stress of the material is the maximum stress which a material can withstand. Beyond this point breakage occurs. 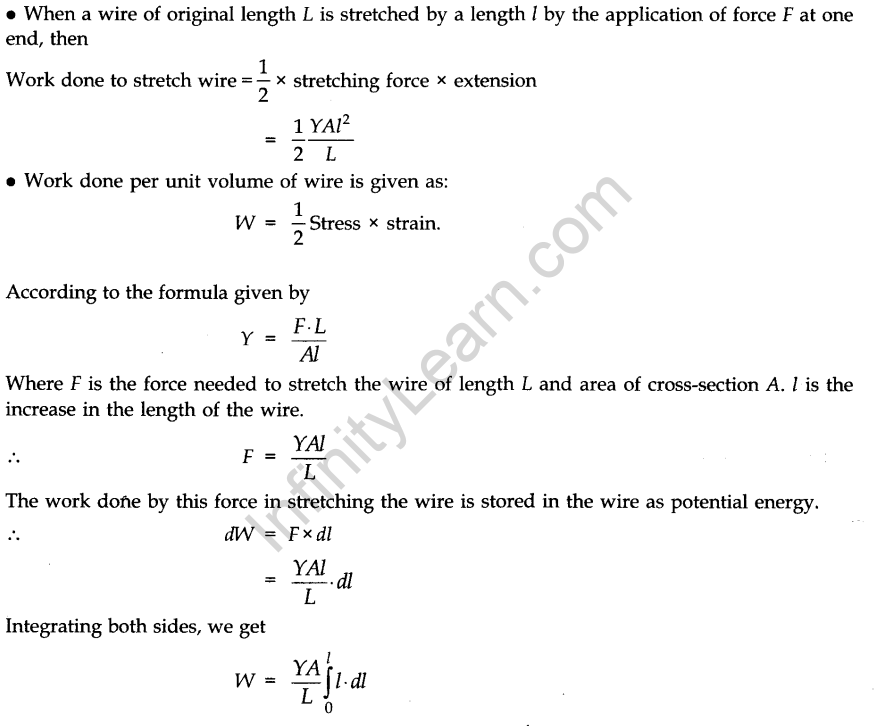 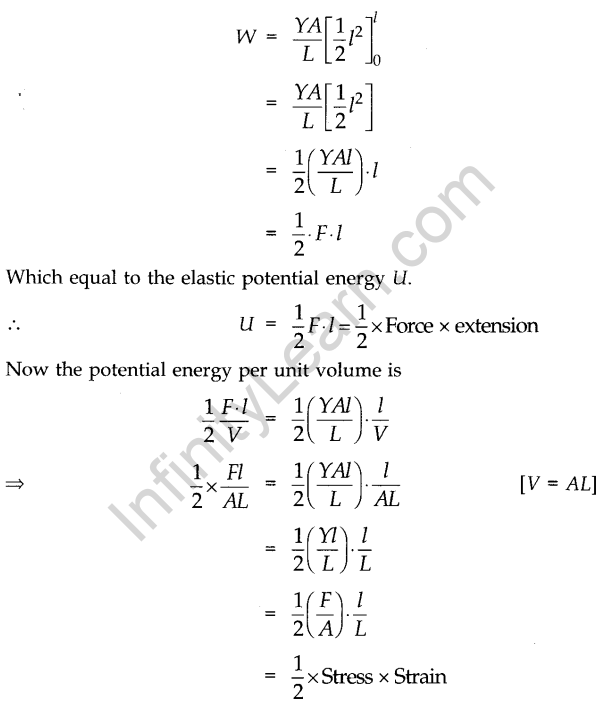 Hence, the elastic potential energy of a wire (energy density) is equal to half the product of its stress and strain.
• IMPORTANT TABLES 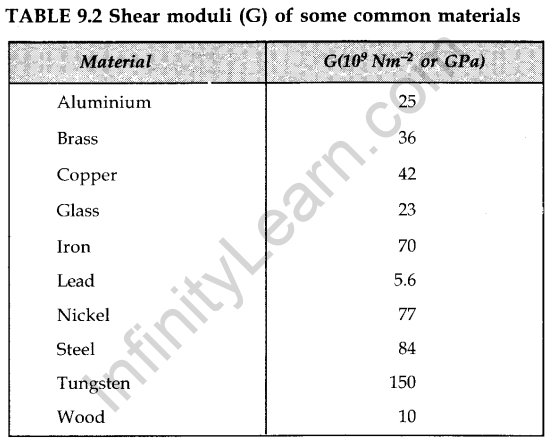 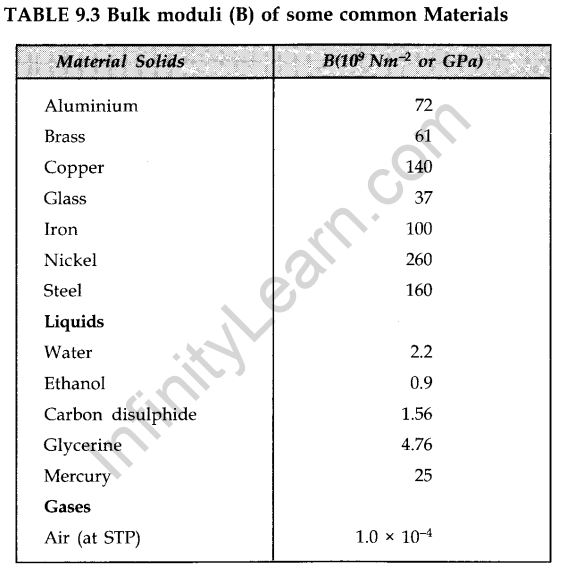 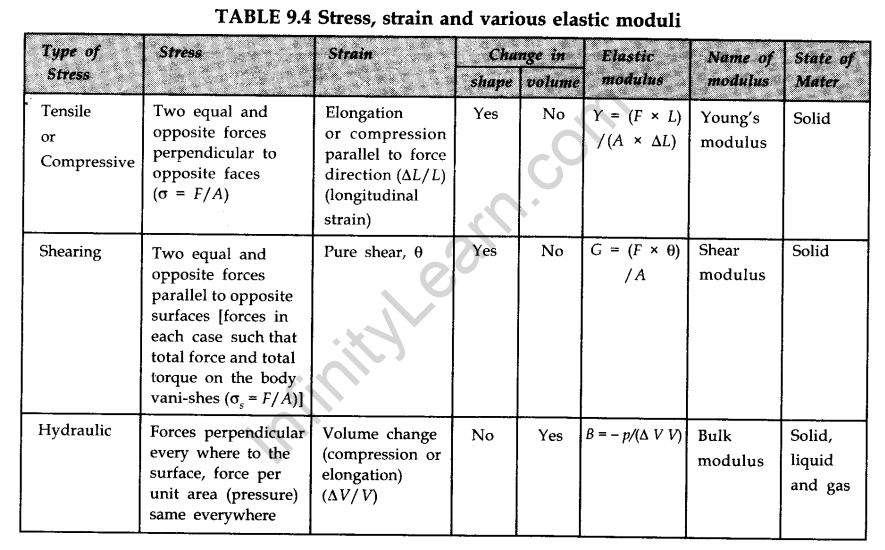