Question.2. Why are there a wide range of colours, hardness, crystal forms, lustre and density found in minerals?
Answer. A mineral that will be formed from a certain combination of elements depends upon the physical and chemical conditions under which the mineral forms. It is because of these physical and chemical conditions that minerals possess a wide range of colours, crystal forms, lustre and density.

Question.7. Suppose you have to buy a packed bottle for drinking water in your journey. Which logo will you like to see to be sure about its quality?
Answer. Indian Standard Instrument (ISI) issued by Ministry of Agriculture.

Question.8. How do the deposits with banks become their source of income?
Answer. Banks charge a higher interest rate on loans they extend than what they offer on deposits.
The difference of interest is the main source of income of banks.

Question.9. How had the female figures become an allegory of the nation during nineteenth century in Europe? Analyse.
Answer. Artists in the eighteenth and nineteenth centuries portrayed nations as female figures. The female form, that was chosen to personify the nation, did not stand for any particular woman in real life. Rather it sought to give the abstract idea of the nation in concrete form. That is, the female figure became the allegory of the nation.
In France, she was named Marianne—a popular Christian name and in Germany, Germania. Germania wears a crown of oak leaves as the German oak stands for heroism. The characteristics of Marianne were drawn from those of Liberty and Republic —the red cap, the tricolour and cockade.
Or
How did nationalism emerge in Vietnam through the efforts of different sections of society to fight against the French? Analyse.
Answer. Nationalism in Vietnam emerged through the efforts of different sections of the society:

Question.13. “Efficient means of transport are pre-requisites for the fast development.” Express your views in favour of this statement.
Answer. See Q. 14, 2014 (I Outside Delhi).

Question.14. “The textile industry is the only industry in the country which is self-reliant and complete in the value chain.” Justify the statement.
Answer. See Q. 13, 2015 (III Outside Delhi).

Question.17. “Most of the established democracies are facing the challenge of expansion.” Support the statement with examples.
Answer. See Q. 17, 2012 (I Delhi).

Question.18. How can money be easily exchanged for goods or services? Give an example to explain.
Answer. Money as a medium of exchange for goods and services:
A person holding money can easily exchange it for any commodity or service that he or she might want. Everyone prefers to receive payments in money and exchange the money for things they want.
For example: A shoemaker wants to sell shoes in the market and buy wheat. The shoe maker will first exchange shoes for money and then exchange the money for wheat. If the shoemaker had to directly exchange shoes for wheat without the use of money, he would have to look for a wheat growing farmer who not only wants to sell wheat but also wants to buy the shoes in exchange. Both the parties have to agree to sell and buy each other’s commodities. This process is very difficult, time consuming and unhealthy.

Question.19. ‘Barriers on foreign trade and foreign investment were removed to a large extent in India since 1991’. Justify the statement.
Answer. See Q. 18. 2014 (I Delhi).

Question.21. Analyse the measures and practices introduced by the French revolutionaries to create a sense of collective identity amongst the French people.
Answer. See Q. 21,2012 (I Outside Delhi).
Or
“U.S. entry into the war in Vietnam marked a new phase that proved costly to Vietnamese as well as to the Americans.” Analyse the statement.
Answer. Effect of the War on Vietnam:

Effect of the US involvement on life within the US:

Question.22. Why did Gandhiji decide to launch a nationwide satyagraha against the proposed Rowlatt Act 1919? How was it organised? Explain.
Answer. See Q. 10, 2015 (I Delhi).

Occurrence of Petroleum in India:

Question.24. “The economic strength of a country is measured by the development of manufacturing industries.” Support the statement with arguments.
Answer. See Q. 23, 2015 (I Outside Delhi).

Question.25. How are the democratic governments better than the other forms of governments? Compare.
Answer. See Q. 25, 2014 (I Delhi).

Question.27. Describe the vital and positive role of credit with examples.
Answer. See Q. 28, 2014 (I Outside Delhi).
Example: In the festive season, a shoe manufacturer, Ram receives an order from a large trader in town for 3,000 pairs of shoes to be delivered in a month’s time. To complete production on time Ram has to hire workers for stitching and pasting work. He has to purchase the raw materials. To meet these expenses Ram obtains loans from two sources. First, he asks the leather supplier to supply leather now and promises to pay him later. Second, he obtains loan in cash from the large traders as advance payment for 1000 pairs of shoes with a promise to deliver the whole order by the end of the month.
At the end of the month, Salim is able to deliver the order, make a good profit and repay the money he had borrowed.
Salim obtains credit to meet the working capital needs of production. The credit helps him to meet the ongoing expenses of production, complete production on time and thus increase his earnings. Credit therefore plays a vital and positive role in this situation.

Question.28. What is globalisation? Describe the role of Multinational Corporations (MNCs) in promoting globalisation process.
Answer. Globalisation is the process of rapid integration or inter-connection among countries. Over the last 20-30 years, these has been a tremendous increase in globalisation with the increase in the number of MNCs.

Question.29. Three features A, B and C are marked on the given political outline map of India. Identify these features with the help of the following information and write their correct names on the lines marked in the map:
A. The place where the Indian National Congress Session was held.
B. The place associated with the Peasant’s Satyagraha.
C. The city associated with the Jallianwala Bagh incident. 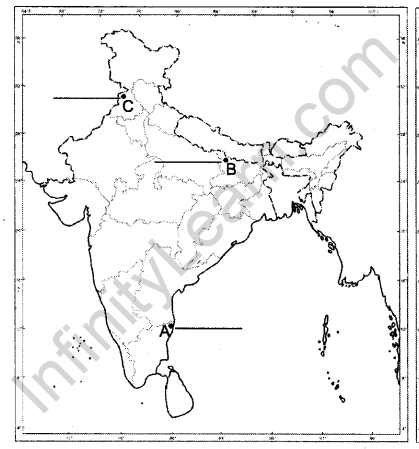 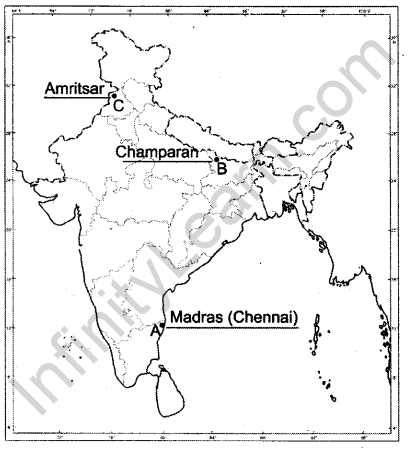 Note : The following questions are f Or the Visually impaired Candidates only, in lieu of Q No. 29:
(29.1) Name the place where the Indian National Congress Session was held in 1927.
(29.2) Name the state where the Indigo planters organised satyagraha.
(29.3) Name the city related to the Jallianwala Bagh incident.
Answer. (29.1) Madras
(29.2) Bihar
(29.3) Amritsar

Question.30 On the given political outline map of India locate and label the following with appropriate symbols:
A. Ankleshwar—Oil field
B. Durgapur—Iron and steel plant
C. Tuticorin—Major seaport
Answer. 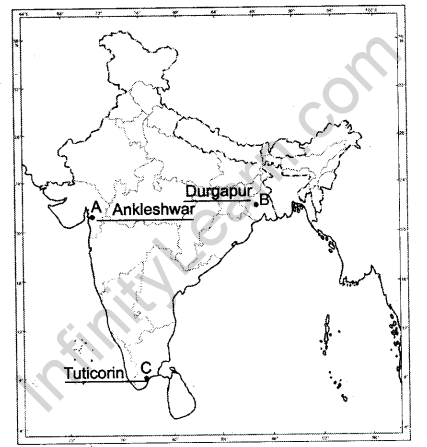 Except for the following questions, all the remaining questions have been asked in Set-I.
Question.1. Name the event that mobilised nationalist feelings among the educated elite across Europe in 1830-1848?
Answer. The Greek War of Independence in 1821.
Or
Name the writer who wrote a play based on the lives of Trung sisters.
Answer. Phan Boi Chau.

Challenges faced by the sugar industry in India are:

Question.25. “All over the world, people express their dissatisfaction with the failure of political parties to perform their functions well.” Analyse the statement with arguments.
Answer. Since parties are the most visible face in a democracy, people blame them for whatever is wrong with the working of democracy.
There are four major areas where the working of political parties faces challenge:

Question.19. “Globalisation and greater competition among producers has been of advantage to consumers.” Justify the statement with examples.
Answer. See Q. 28, 2015 (I Outside Delhi).

Question.22. How did a variety of cultural processes play an important role in making of nationalism in India? Explain with examples.
Answer. See Q. 22, 2014 (II Outside Delhi)