The NCERT Solutions for Class 8 Science Chapter 15 provides a detailed answer to all of the chapter’s questions. When used in conjunction with textbooks, students will be able to increase their exam preparation. It will also eliminate the need for other books to be consulted.

Do you need help with your Homework? Are you preparing for Exams? Study without Internet (Offline)
×
SOME NATURAL PHENOMENA

1.Which of the following cannot be charged easily by friction ? [ ]

2.When a glass rod is rubbed with a piece of silk cloth the rod [ ]

a) and the cloth both acquire positive charge.

b) becomes positively charged while the cloth has a negative charge.

c) and the cloth both acquire negative charge.

d) becomes negatively charged while the cloth has a positive charge.

A.b) the rod becomes positively charged, while the cloth has a negative charge.

3.Write T against true and F against false in the following statements.

d) Earthquakes can be predicted in advance. [ F ]

4. Sometimes, a crackling sound is heard while taking off a sweater during winter. Explain.

A.When a sweater is taken off, the woollen sweater gets charged because of the friction between the sweater and the body. Hence, one can hear a crakling sound during the given process.

5. Explain why a charged body loses its charge if we touch it with our hand.

A.When we touch a charged object, our body conducts its charge to the earth. That is why a charged body loses its charge, if we touch it with our hand. This phenomenon is known as electric discharge.

6. Name the scale on which the destructive energy of an earthquake is measured. An earthquake measures 3 on this scale. Would it be recorded by a seismograph ? Is it likely to cause much damage ?

A. The destructive energy of an earthquake is measured by the Richter scale. This scale has the readings from 1 to 10.

The reading of magnitude 3 on the Richter scale would be recorded by a seismo graph.

If the Richter scale gives a reading of magnitude 3, then the earthquake is not likely to cause much damage. Generally, earthquake of magnitudes higher than 5 is considered destructive in nature. 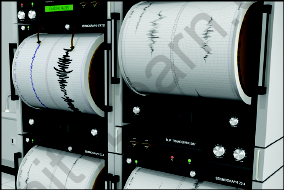 7. Suggest three measures to protect ourselves from lightning.

A. Protective measures against lightning are as follows :

i) Stay or go indoors. If you hear thunder, donot go outside unless absolutely necessary.

ii) Stay away from anything that could conduct electricity.

9. Describe with the help of a diagram an instrument which can be used to detect a charged body.

A. An electroscope can be used to detect whether a body is charged or not. The following figure shows a simple electroscope. 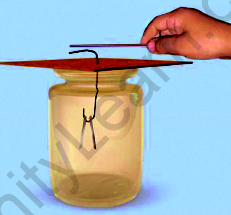 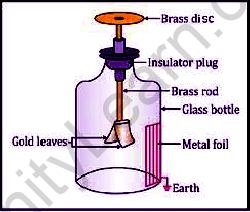 When the metal disc is touched with a charged body, aluminium strips moves away from each other. This happens because some of the charges of the body are transferred to the strips through the metal rod. This method of charging a body is called Charging by conduction. The nature of charges on both the leaves and the charged body are similar. Hence, both the leaves of the aluminium foil will move away from each other. If the body was not charged, then the leaves of the foil would remain as they were before. They would not repel each other.

10.List three states in India where earthquakes are more likely to strike.

The three states in India where earthquakes are more likely to strike are Jammu and Kashmir, Gujrat, and Assam.

11. Suppose you are outside your home and an earthquake strikes. What precaution would you take to protect yourself ?

Some of the precautions are as follows :

i) Try to find an open field away from tall buildings, installations, tall trees, and electric wires and poles.

ii) If travelling in a bus or a car, then do not come out when an earthquake strikes. Ask the driver to drive in an open field.

12.The weather department has predicted that a thunderstorm is likely to occur on a certain day. Suppose you have to go out on that day. Would you carry an umbrella ? Explain.

No. We should not carry an umbrella in a thunderstorm. During thunderstoms, which are accompanied with lightning, electric discharge from the clouds can travel through the metallic rod of the umbrella. This may give an electric shock to the person who is carrying it . Hence, it is not safe to carry an umbrella during lightning.

13.Boojho’s mother told to hims that earth is balanceds on the horn of a bull and when the bull shifts it to the other horn an earth quake takes place how could it be true ?

In ancient times people did not know the true cause of earthquakes. Their ideas were therefore expressed in mythical stories such as the one told by Boojho’s grand mother.

14.What could cause a disturbance inside the earth ?

We know that the termors are caused by the disturbance deep downs inside the upper most layer of the earth called the crust. The outermost layers of the earth is not in one piece. It is fragmented each pragment is called a plate these plates are in continuals motion a plate goes under another due to collision they cause disturbance in the earth’s crsut.

15. If scientists know so much about earthquakes can they also predict when and where the next one will strike ?

We know for sure what causes an earthquake it is not yet possible to predic when and where the next earthquake might occur.

The solution to many natural phenomena such as lightning, earthquakes, charge by rubbing, and so on can be found in the fifteenth chapter of NCERT solutions for class 8 Science. Students can gain a comprehensive knowledge of these ideas with the help of this NCERT solution.

This chapter has a total of seven sub-topics, including a description of several natural spectacles. The cause, effects, qualities, and magnitude of lightning, as well as the functions of the electroscope, are all covered. Candidates can quickly grasp a topic by using practical examples and visual representations.

NCERT Solutions for Class 8 Science Chapter 15 are a must-have study resource for class eight students. Its use of plain and basic language aids applicants in grasping any material more quickly. This NCERT solution is accessible for free download on the internet.

There are seven sections in the chapter on various natural phenomena in Class 8. Here’s a quick rundown of each of them:

The Ch 15 Science Class 8 begins with a talk of lightning after a general introduction. It explains what lightning is and how people interpret it in modern times versus ancient times. It also invites students to create their own experience to learn about the relationship between electric charge and lightning.

This sub-topic in Class 8 Science Chapter 15 discusses how an electric charge is created when two objects are rubbed together. It employs an activity to encourage pupils to comprehend this natural occurrence. They will be able to experience it first hand and gain a deeper understanding of the issue as a result of this exercise.

The discussion of charges is taken a step further in this topic. Students will learn how two comparable charges are not attracted to each other in this sub-topic of NCERT Solutions Class 8 Science Chapter 15. Candidates can participate in two exercises at home to better comprehend this idea. Students can utilize two inflated balloons and rub them with a woolen cloth in one experiment. When they’re done, they’ll notice that neither of them is coming together.

This section of the NCERT answer for Class 8 Science Chapter 15 demonstrates how metals can transport charge. Students can learn more about this topic by using a paperclip, an empty ball pen refill, and two pieces of aluminium foil in the activity described here. They also learn about electroscopes, which are devices that are used to determine if an object is solid or not.

Class 8 Science Chapter 15 NCERT Solutions Some Natural Phenomena goes on to explain the concept of lightning and its history. Research has proven how positive and negative charges present in clouds produce this phenomenon, despite the fact that it has yet to be fully understood. The air currents rise higher before a thunderstorm, while the water droplets move downward. The currents are separated by it. Lightning or an electric discharge occurs when the concentration of these charges reaches a critical level.

Students learn about the important safety precautions during thunderstorms and lightning in this portion of NCERT Solutions for Class 8 Science Chapter Some Natural Phenomena. It includes safe places to go in such instances, as well as what to do and what not to do. This section goes into greater detail on light conductors and their usefulness in building security.

A detailed study of earthquakes is included in the last sub-topic of these NCERT answers for Class 8 Science Ch 15. It’s a complex and unpredictably unpredictable natural occurrence. Earthquakes, on the other hand, maybe forecast to a degree with contemporary technology. The definition and causes of an earthquake are then explained, as well as how to be safe during this natural occurrence.

As previously stated, NCERT Solutions for Class 8 Science Chapter 15 provides students with assistance and helps their preparations. Apart from that, there are four compelling reasons to choose this study material:

NCERT Solutions for Class 8 Science Chapter 15 provide assistance to students and help them enhance their grades. This study material is available for free on the internet. It is available for immediate download from INFINITY LEARN, one of India’s major e-learning sites. In addition, INFINITY LEARN provides live sessions for students to clear their doubts.