Question 1.
What is meant by ‘doping’ in a semiconductor? [1]

Question 2.
What is the role of graphite in the electrometallurgy of aluminium? [1] Answer:
Graphite is used as anode and useful for the reduction of Al2O3 into Al.

Question 4.
Give the IUPAC name of the following compound. 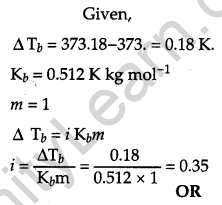 (ii) Two solutions having the same molar concentration are said to be isotonic solutions. e.g., All intravenous injections must be isotonic with body fluids.

(iv) Solutions that follow Raoult’s law at all temperatures and concentrations are called ideal solutions.

Question 10.
What do you understand by the ‘order of a reaction’? Identify the reaction order from each of the following units of reaction rate constant: [2]

Answer:
The sum of the powers to which the concentration of reactants are raised in the rate law expression is called the order of a reaction.

(ii) Heterogeneous catalysis: The reactants and catalyst are in a different phase.

(ii) Mixing two Oppositely Charged Sols: Equal proportions of oppositely charged sols are mixed, they get neutralized and get precipitated.

(iii) Dialysis: Electrolytes are removed from the sol and colloid becomes unstable and gets coagulated.

Question 13.
Describe the principle involved in each of the following processes. [2] (i) Mond process for refining of Nickel.
(ii) Column chromatography for purification of rare elements.
Answer:
(i) Nickel combined with carbon monoxide to form a volatile complex which is further decomposed to get back a pure nickel.

(ii) The basic principle involved in column chromatography is that different elements present in a mixture are adsorbed on adsorbent at different extents.

Question 14.
Explain the following giving an appropriate reason in each case. [2] (i) O2 and F2 both stabilize higher oxidation states of metals but O2 exceeds F2 in doing so.
(ii) Structures of xenon fluorides cannot be explained by Valence Bond approach.
Answer:
(i) Due to the difference in the atomic size of oxygen and fluorine and the property of oxygen to form multiple bonds with metals, O2 exceeds F2, stabilize higher oxidation states.

(ii) For explaining the structures of xenon fluorides, we need to use VSEPR and hybridization theories because, in VBT, covalent bonds are formed by overlapping of a half-filled atomic orbital. But xenon has fully filled electronic configuration.

Question 16.
What is meant by
(i) peptide linkage
(ii) biocatalysts? [2] Answer:
(i) Peptides linkage is the amide bond that helps to connect amino acids to form proteins. It is formed between -COOH and -NH2 group of two amino acids with the loss of water molecule.

(ii) Biocatalysts are enzymes that catalyse the biochemical reactions in the bodies of living organisms, e.g., Amylase.

Question 18.
Draw the structure of the monomer for each of the following polymers: [2] (i) Nylon 6
(ii) Polypropene.
Answer: 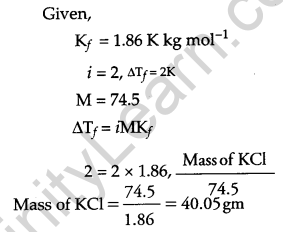 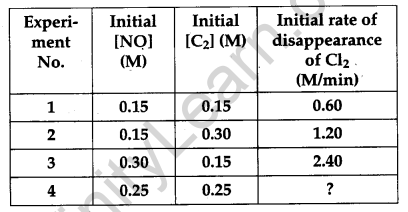 (a) Write the expression for rate law.
(b) Calculate the value of rate constant and specify its units
(c) What is the initial rate of disappearance of Cl2 in exp. 4?
Answer: 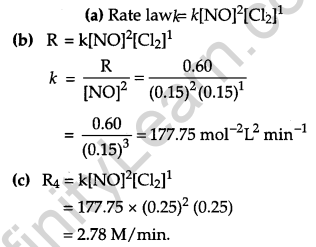 Question 22.
How would you account for the following? [3] (i) Many of the transition elements are known to form interstitial compounds.
(ii) The metallic radii of the third (5d) series of transition metals are virtually the same as those of the corresponding group members of the second (4d) series.
(iii) Lanthanoids form primarily +3 ions, while the actinoids usually have higher oxidation states in their compounds, +4 or even +6 being typical.
Answer:
(i) Transition metal lattice has voids and hence these voids can trap small atoms like H, C and N to form interstitial compounds.

(ii) It is because electrons first fill the 4f orbitals and then the 5d-orbitals causing a decline in radii of third (5d) series.

(iii) This is because of the comparable energies of 5f, 6d and 7s orbitals so all of them can participate

Question 23.
Give the formula of each of the following coordinate with BaSO4: [3] (i) Co3+ ion is bound to one Cl–, one NH3 molecule and two bidentate ethylenediamine (en) molecules.
(ii) Ni2+ ion is bound to two water molecules and two oxalate ions.
Write the name and magnetic behaviour of each of the above coordination entities.
(At. Nos. Co = 27, Ni = 28)
Answer:
(i) [Co(NH3)(en)2Cl]2+
Amminebis (ethylenediamine) chloride cobalt (III) ion, diamagnetic.

Question 25.
Draw the structure and name the product formed if the following alcohols are oxidized. Assume that an excess of an oxidizing agent is used. [3] (i) CH3CH2CH2CH2OH
(ii) 2-butanol
(iii) 2-methyl-1-propanol
Answer: 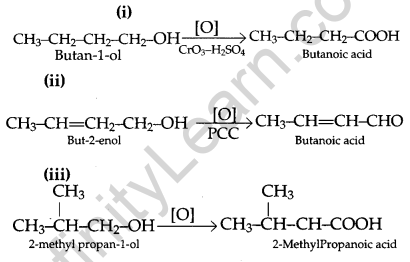 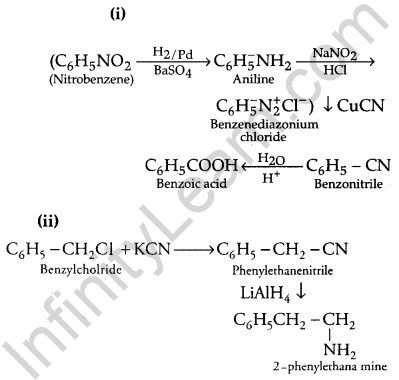 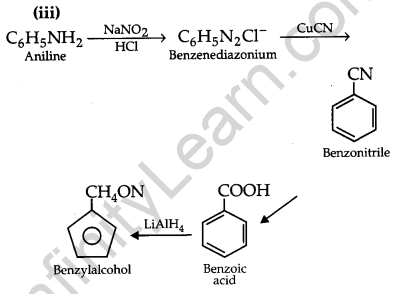 Question 27.
What are the following substances? Give one example of each one of them. [3] (i) Tranquilisers
(ii) Food preservatives
(iii) Synthetic detergents.
Answer:
(i) Tranquilisers are drugs that act on the central nervous system to get relief from anxiety, stress etc. They are used in the treatment of stress-related mental disorders eg., Equanil.

(ii) These are chemicals used to preserve food by protecting it against microbial growth, e.g., Sodium benzoate.

(iii) Synthetic detergents have all the properties of soap but they do not precipitate in hard water. e.g., Sodium p-dodecyl benzene sulphonate. 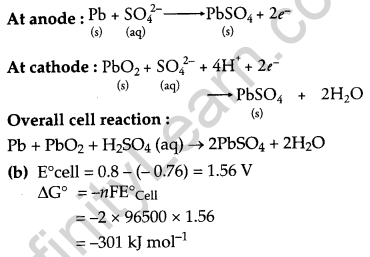 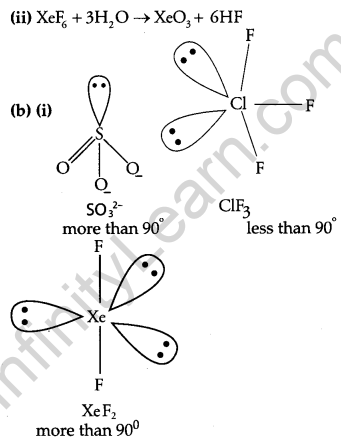 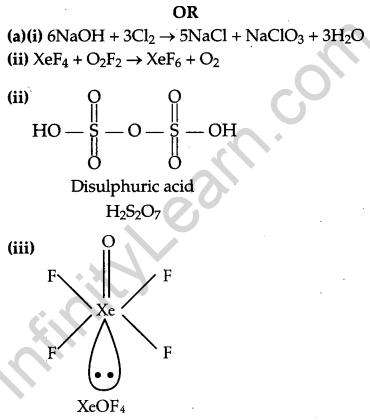 Question 30.
(a) Illustrate the following name reactions giving a suitable example in each case: [2],[3] (i) Clemmensen reduction
(ii) Hell-Volhard-Zelinsky reaction
(b) How are the following conversions carried out?
(i) Ethyl Cyanide to ethanoic acid
(ii) Butan-1-ol to butanoic acid
(iii) Benzoic acid to m-bromobenzoic acid
OR
(a) Illustrate the following reactions giving a suitable example for each:
(i) Cross aldol condensation
(ii) Decarboxylation
(b) Give simple tests to distinguish between the following pairs of compounds:
(i) Pentan-2-one and Pentan-3-one
(ii) Benzaldehyde and Acetophenone
(iii) Phenol and Benzoic acid
Answer:
(a) (i) Aldehydes and ketones are reduced to the CH2 group on treatment with zinc- amalgam and cone. HCl. 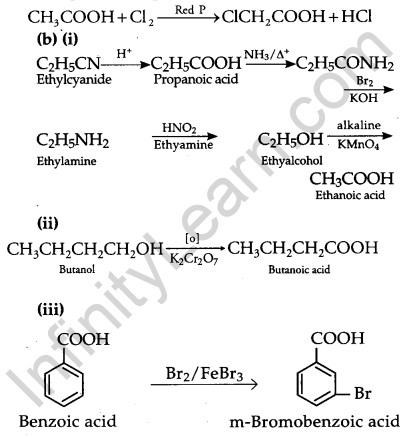 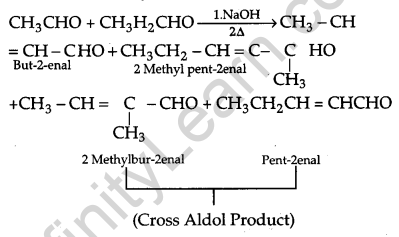 (ii) Carboxylic acid loses carbon dioxide to form hydrocarbon when their salts are heated with sodium. The reaction is known as decarboxylation reaction

(b) (i) Pentan-2-one gives iodoform test but pentan-3-one does not. 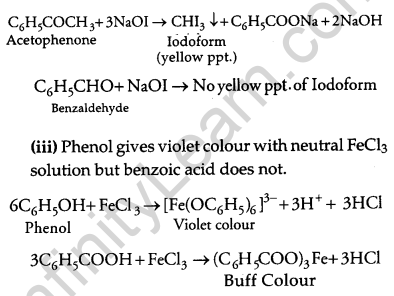 Note: Except for the following questions, all the remaining questions have been asked in the previous set.

Question 1.
Write a point of distinction between a metallic solid and an ionic solid other than metallic lustre. [1]

Question 14.
What is meant by

Question 18.
Write the main structural difference between DNA and RNA. Of the two bases, thymine and uracil, which one is present in DNA? [2] Answer:

DNA contains thymine base and uracil base is present in RNA.

Question 23.
How would you account for the following? [3] (i) With the same d-orbital configuration (d4) Cr2+ is a reducing agent while Mn3+ is an oxidizing agent.
(ii) The actinides exhibit a larger number of oxidation states than the corresponding members in the lanthanide series.
(iii) Most of the transition metal ions exhibit characteristic in colours in aqueous solutions.
Answer:
(i) Cr2+ has d4 configuration. It gets oxidized to Cr3+ with electronic configuration d3 which is more stable. Therefore, Cr2+ is a reducing agent. Mn3+ has d4 configuration. It gets reduced to Mn2+ with d5 configuration. This is half-filled d-orbital and is stable. Therefore Mn3+ is an oxidizing agent.

(ii) Because 5f, 6d and 7s energy levels have a small energy gap in the actinide series. Due to these orbitals, actinoids exhibit a large number of oxidation states.

(iii) Due to partial absorption of visible light, the electron from one orbital gets promoted to another orbital of the d subshell. Due to the presence of impaired electrons transition metals are coloured.

Question 30.
(a) Give a possible explanation for each one of the following: [2], [3] (i) There are two -NH2 groups in semicarbazide. However, only one such group is involved in the formation of semicarbazones.
(ii) Cyclohexanone forms cyanohydrin in good yield but 2, 4, 6-trimethylcyclohexanone does not.
(b) An organic compound with molecular formula C9H10O forms 2, 4, -DNP derivative, reduces Tollens’ reagent and undergoes Cannizzaro’s reaction. On vigorous oxidation, it gives 1, 2-benzenedicarboxylic acid. Identify the compound.
OR
(a) Give chemical tests to distinguish between
(i) Phenol and Benzoic acid
(ii) Acetophenone and Benzophenone
(b) Write the structures of the main products of the following reactions: 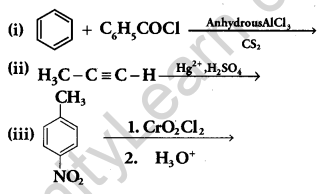 (iii) C9H10O is aldehyde because it reduces Tollen’s reagent. It undergoes Cannizaro’s reaction, therefore, it is substituted benzaldehyde. It gives 1, 2, Benzene-dicarboxylic acid. The compound is 2-Ethylbenzaldehyde. 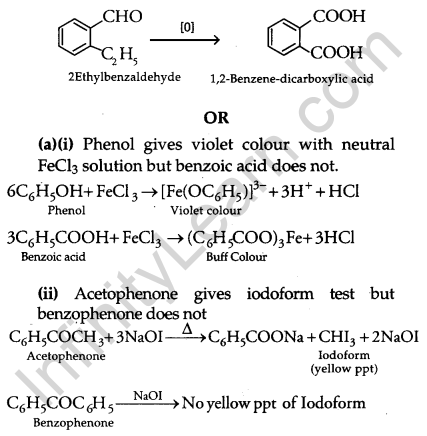 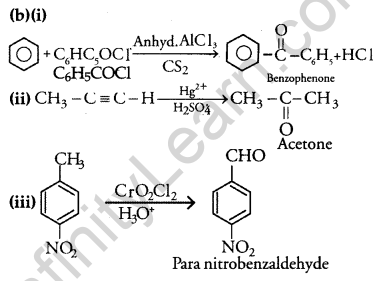 Question 3.
Out of PH3 and H2S, which is more acidic and why? [1] Answer:
H2S is more acidic than PH3 due to a smaller size and higher electronegativity of sulphur. Therefore S-H bond is polar than P-H bond and easy to remove.

Question 12.
Explain the following terms giving one example for each: [2] (i) Micelles
(ii) Aerosol.
Answer:
(i) Micelles are aggregates which exhibit colloidal behaviour at higher concentration, with the hydrophilic part outside and the hydrophobic part towards the oil and dirt particle, e.g., soap

(ii) An aerosol is a colloid of the fine solid particle or liquid drops in the air or another gas. It can be natural or artificial, e.g. dust particle and smoke. 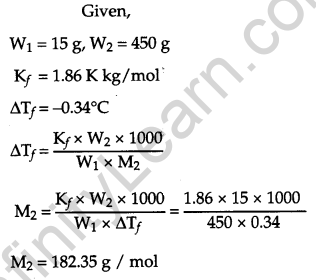 Question 22.
Explain the following observations giving an appropriate reason for each: [3]

Question 23.
Write the name, the structure and the magnetic behaviour of each of the following complexes: [3]

Question 27.
Explain the following terms giving one example of each type: [3]

Question 30.
Draw the molecular structures of the following compounds: [2], [3] (i) XeF6
(ii) H2S2O8
(b) Explain the following observations:
(i) The molecules NH3 and NF3 have dipole moments which are of the opposite direction.
(ii) All the bonds of PCl5 molecule are not equivalent.
(iii) Sulphur in vapour state exhibits paramagnetism.
OR
(a) Complete the following chemical equations:
(i) XeF4 + SbF5 →
(ii) Cl2 + F2 (excess) →
(b) Explain each of the following:
(i) Nitrogen is much less reactive than phosphorus.
(ii) The stability of the +5 oxidation state decreases down group 15.
(iii) The bond angles (O-N-O) are not of the same value in NO–2 and NO+2.
Answer: 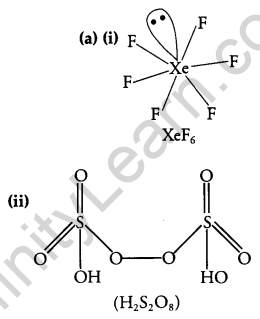