Question 1.
How many atoms constitute one unit cell of a face-centred cubic crystal? [1]

Question 5.
What happens when CH3Br is treated with KCN? [1] Answer:

It is a nucleophilic substitution reaction. 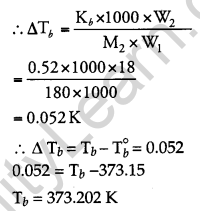 Lyophobic Colloids (Liquid Hating): These are the colloidal solutions in which dispersed phase has very little affinity for the dispersion medium. Such solutions are unstable and are irreversible in nature, eg., (AS2S3 Sol).

Lyophobic colloids can be easily coagulated because, on the addition of the small amount of electrolyte, the charge on colloidal particles is removed, as a result, the particles will come closer to each other and then aggregate to form a cluster which settles down under the force of gravity.

Question 12.
Write the differences between physisorption and chemisorption with respect to the following: [2] (i) Specificity
(ii) Temperature dependence
(iii) Reversibility and
(iv) Enthalpy change Answer:
Answer:

(b) Out of C and CO, CO is a better reducing agent at a lower temperature range in the blast furnace to extract iron from the oxide ore because in Ellingham diagram ΔG(CO, CO2) < ΔG(Fe, FeO) SO, CO will reduce FeO to Fe and will be oxidized to CO2. 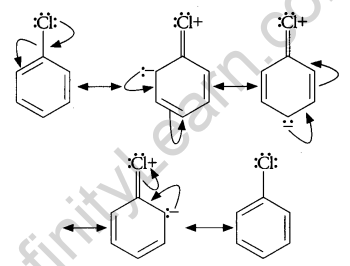 This results in delocalization of electrons of C-Cl bond and a partial double bond character develops in the bond, which makes it difficult for the nucleophile to cleave the C-Cl bond.

2. The nucleophile suffers repulsion from the increased electron density on the benzene ring, as a result, the nucleophile is unable to make a close approach for the attack on the molecule.

Question 17.
Explain the mechanism of the following reaction: [2]

Answer:
The mechanism of the reaction is given below: 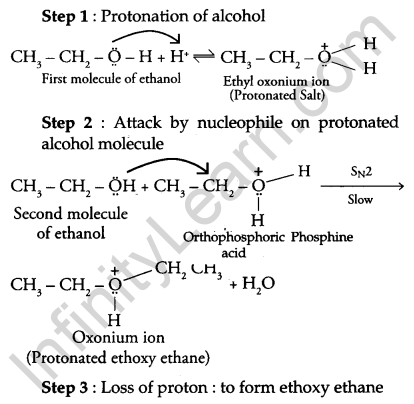 Question 18.
How will you convert:
(i) Propene to Propan-2-ol?
(ii) Phenol to 2, 4, 6 – trinitrophenol?
Answer:
(i) When H2SO4 is added to propene, propan-2-ol is formed. The addition of H2SO4 takes place in accordance with Markovnikov’s rule. 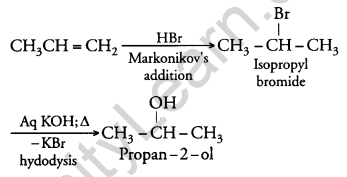 (ii) When concentrated nitric acid is added to phenol in the presence of sulphuric acid it gives 2, 4, 6 – trinitrophenol.

Question 19.
(a) What type of semiconductor is obtained when silicon is doped with boron? [3] (b) What type of magnetism is shown in the following alignment of magnetic moments?

(c) What type of point defect is produced when AgCl is doped with CdCl2? 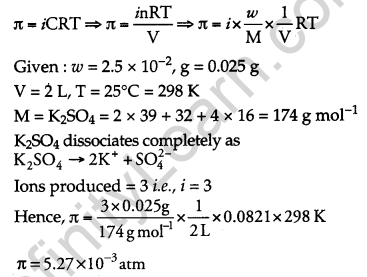 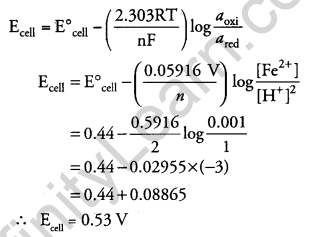 (ii) This is because the atomic radii of 4d and 5d transition elements are nearly the same. This similarity in size is a consequence of lanthanide contraction which is due to weak shielding of d-electrons. As a result, the radii of Hf becomes nearly equal to that of Zr.

(iii) The catalytic activity of transition elements and their compound is due to the following reasons:
1. Due to their tendency to show variable oxidation state transition metal form unstable intermediate compounds and provides a new path for the reaction with lower activation energy.
2. In some cases, the transition metals provide a suitably large surface area with free valencies or ion which reactant can adsorb.
OR

Question 24.
Give the structures of A, B and C in the following reactions: [3] 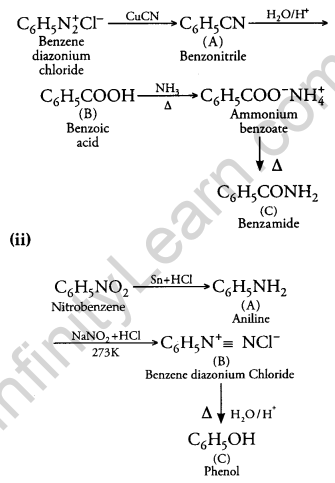 Question 25.
Write the names and structures of the monomers of the following polymers: [3] (i) Buna-S
(ii) Neoprene
(iii) Nylon-6, 6
Answer: 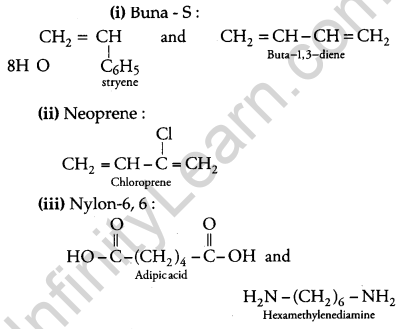 Question 26.
After watching a programme on TV about the adverse effects of junk food and soft drinks on the health of school children, Sonali, a student of Class XII, discussed the issue with the principal. The principal immediately instructed the canteen contractor to replace the fast food with the fibre and vitamins rich food like sprouts, salad, fruits etc. This decision was welcomed by the parents and the students. [3] After reading the above passage, answer the following questions:
(a) What values are expressed by Sonali and the Principal of the school?
(b) Give two examples of water-soluble vitamins.
Answer:
(b) The two water-soluble vitamins are vitamin B and Vitamin C (Ascorbic acid).

Question 28.
(a) A reaction is second order in A and first order in B. [5] (i) Write the differential rate equation.
(ii) How is the rate affected increasing the concentration of A three times?
(iii) How is the rate affected when the concentrations of both A and B are doubled?
(b) A first-order reaction takes 40 minutes for 30% decomposition. Calculate t1/2 for this reaction.
(Given: log 1.428 = 0.1548)
OR
(a) For a first-order reaction, show that time required for 99% completion is twice the time required for the completion of 90% of the reaction.
(b) Rate constant ‘k’ of a reaction varies with temperature ‘T’ according to the equation:

Now, it takes 40 min for 30% decomposition i.e. reactant left after 40 min is 70% of its initial concentration. 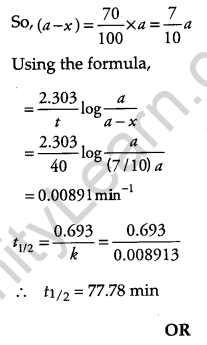 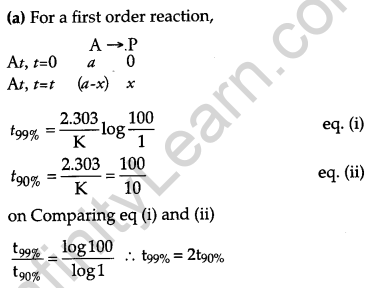 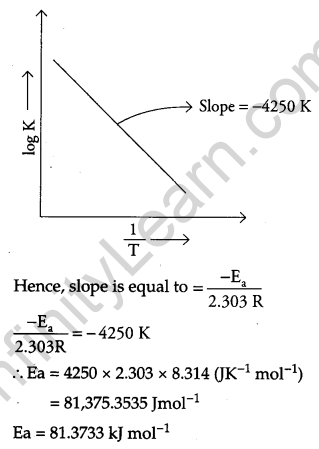 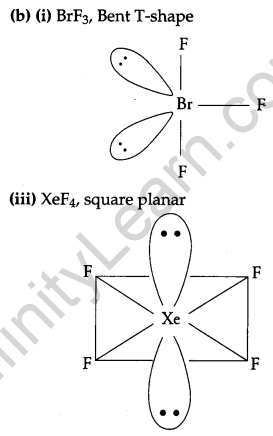 OR
(a) (i) Helium mixed with oxygen under pressure is given to sea-divers for artificial respiration because of its very low solubility in blood. Air is not given because nitrogen present in air being soluble in blood will give a painful sensation called bends by bubbling out blood on moving from high pressure to the atmospheric pressure. Thus, the oxygen-helium mixture is used.

(iii) Oxygen shows catenation behaviour less than sulphur because the oxygen atom is smaller in size as compared to sulphur due to this the lone pair of an electron in 0-0 bonds in oxygen experiences more repulsion as compared to the S-S bonds and thus, S-S forms a strong bond. 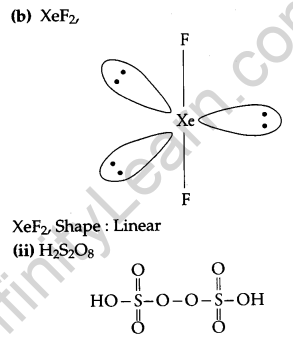 Question 30.
(a) Although phenoxide ion has a number of resonating structures than carboxylate ion, the carboxylic acid is a stronger acid than phenol. Give two reasons. [5] (b) How will you bring about the following conversions?
(i) Propanone to propane
(ii) Benzoyl chloride to benzaldehyde
(iii) Ethanal to but-2-enal.
OR
(a) Complete the following reactions: 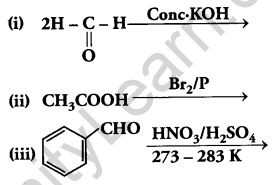 (b) Give simple chemical tests to distinguish between the following pairs of compounds:
(i) Ethanal and Propanal
(ii) Benzoic acid and Phenol.
Answer:
(a) On losing a proton, carboxylic acids form carboxylate ion and phenol forms phenoxide ion as follows: 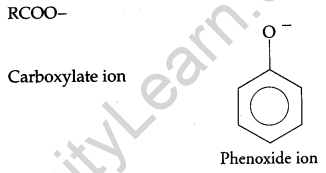 Now, the negative charge is delocalized in both molecules as follows:

The conjugate base of carboxylic acid has two resonance structures in which negative charge is delocalized over two oxygen atoms which stabilize the carboxylate ion.

On the other hand, in phenoxide ion the charge is delocalized over the entire molecule on the less electronegative atom, thus resonance of phenoxides is not important in comparison to resonance in carboxylate ion.
Further, in carboxylate ion, the negative charge is effectively delocalized over two oxygen atoms whereas it is less effectively delocalized over one oxygen atom and a less electronegative carbon atom.
Thus, phenol is less acidic than carboxylic acids. In other words, carboxylic acids are stronger acids than phenol.

(b) (i) Conversion of propanone to propane: 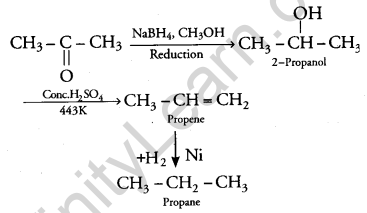 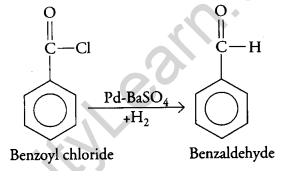 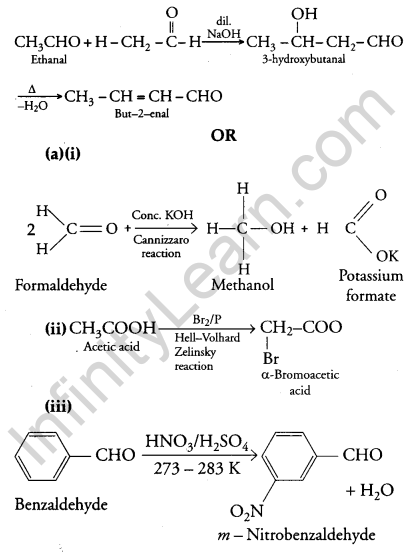 (b) (i) Ethanol and Propanal:
Iodoform Test: When ethanol is treated with sodium hydroxide and ammonia, iodoform is obtained.

Note: Except for the following questions, all the remaining questions have been asked in the previous set.

Question 1.
What type of stoichiometric defect is shown by AgCl? [1]

Question 6.
What inspired N.Bartlett for carrying out a reaction between Xe and PtF6? [1] Answer:
N.Bartlett observed that the first ionization enthalpy of molecular oxygen is almost identical to that of xenon. So after preparing red coloured compound O2PtF62 he made efforts to prepare Xe+PtF–6 by mixing PtF6 and Xe. 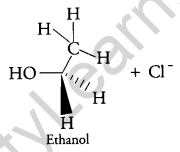 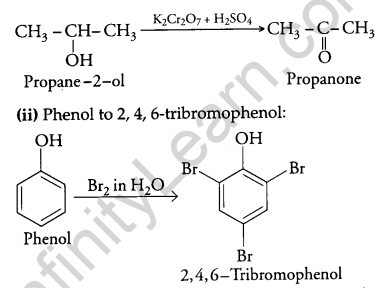 Question 11.
What is the difference between oil/water (O/W) type and water/oil (W/O) type emulsions? Give an example of each type. [2] Answer:
Emulsion of oil-in-water has oil as dispersed phase and water as the dispersion medium. For example, Milk etc.
Emulsion of water-in-oil has water as dispersed phase and oil as the dispersion medium. For example, Cod liver oil etc.

Question 17.
(a) Which of the following ores can be concentrated by froth floatation method and why?
Fe2O3, ZnS, Al2O3
(b) What is the role of silica in the metallurgy of Copper? [2] Answer:
(a) Only sulphide ores are concentrated by this process because pine oil selectively wets the sulphide ore and hence bring it to the froth.
(b) Silica is added in the reverberatory furnace during the extraction of copper to remove iron oxide present in the ore. Iron oxide reacts with the silica and is removed as a slag of iron silicate.
FeO + SiO2 → FeSiO3 (Slag)

Question 18.
(a) Why does p-dichlorobenzene have a higher m.p. than its o- and m- isomers? [2] (b) Why is (-) – Butan-2-ol optically inactive?
Answer:
(a) p-dichlorobenzene has a higher melting point than ortho and meta isomer. This is because the para isomer is having a symmetrical structure and therefore, its packing is more efficient as compared to the ortho and meta isomer, therefore, it shows a higher melting point.

(b) The (±) – Butan-2-ol is optically inactive because it is a racemic mixture and exists in two enantiomeric forms which are non- superimposable mirror images of each other. Both the isomers are present in equal amounts therefore, it does not rotate the plane of polarized light and is optically inactive.

Question 23.
Write the names and structures of the monomers of the following polymers: [3] (i) Polystyrene
(ii) Dacron
(iii) Teflon
Answer:
Polymers with their monomers and their structures: 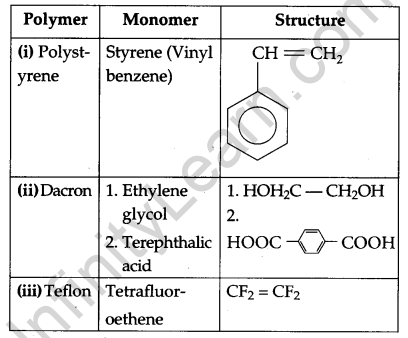 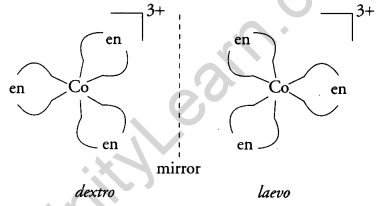 Question 1.
What type of substances would make better Permanent Magnets, Ferromagnetic or Ferrimagnetic? [1]

The carbocation formed when compounds I and II undergo SN1 reaction are shown below:

Question 8.
Write the structure of a p-Methylbenzaldehyde molecule. [1] Answer:

Question 14.
(a) Give an example of zone refining of metals
(b) What is the role of cryolite in the metallurgy of aluminium? [2] Answer:
(a) Zone Refining of Metals: This method is used for the production of semiconductor and other metals of very high purity like germanium, silicon, boron, gallium and indium.

(b) Role of Cryolite in Metallurgy of Aluminium: Cryolite is added to lower the melting point of mixture and to increase the conductivity of the electrolyte.

Question 17.
Account for the following: [2] (i) The C—Cl bond length in chlorobenzene is shorter than that in CH3-Cl.
(ii) Chloroform is stored in closed dark brown bottles.
Answer:
(i) This is due to a partial double bond character to C-Cl bond (due to resonance in C6H5Cl).
(ii) Chloroform in the presence of air gets oxidized to phosgene. Phosgene is carbonyl chloride and is represented as COCl2. To prevent the formation of phosgene, chloroform is stored in dark coloured bottles. The reaction represented as
CHCl3 + \(\frac { 1 }{ 2 }\) O2 → COCl2 + HCl 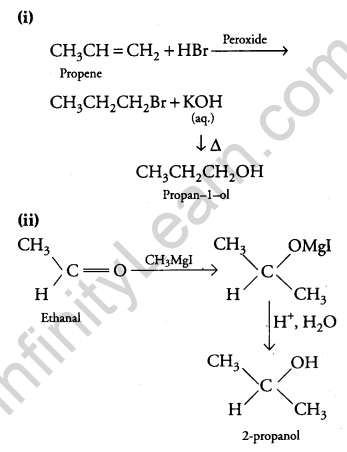 Question 23.
Give the structures of products A, B and C in the following reactions: [3] 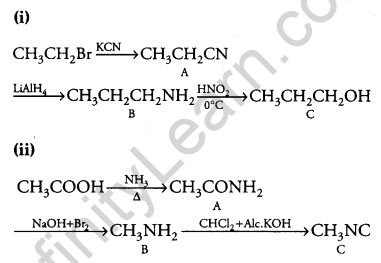 Question 27.
Write the names and structures of the monomers of the following polymers: [3] (i) Bakelite
(ii) Nylon-6
(iii) Polythene
Answer: 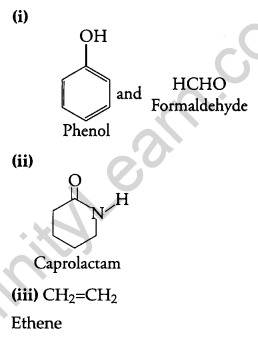