Part A
(Accounting for Partnership Firms and Companies)

1.A, B and C are partners sharing profits in the ratio of 2:2:1. C retired from the firm. Calculate the new profit sharing ratio between A and B.

3.U, V and X are partners in a partnership firm. They do not have a partnership deed. U wants that partners must be allowed interest on capitals but V and X object to it? Is the claim of U valid?

4.On what conditions can forfeited shares be re-issued?

5.Ram and Shyam are partners in a firm. Shyam wants to admit his son Golu into business. Can Goku become the partner of the firm? Give reason.

7.XYZ Ltd has a paid-up share capital of Rs 30,00,000 and a balance of Rs 7,50,000 in the securities premium account. The companies management do not want to carry over this balance. State the purposes for which this balance can be utilised.

8.XYZ Ltd is registered with a capital of Rs 10,00,000 divided into 1,00,000 equity shares of Rs 10 each. It issued 75,000 equity shares to public for subscription. It received applications for 70,000 equity shares. The directors had called the entire nominal value of the shares which was duly received.How will you show the share capital in the balance sheet of XYZ Ltd?

10. Parshav Nath Ltd forfeited 300 equity shares of Rs 10 each, fully called-up, held by Rohan for non-payment of allotment money of Rs 3 per equity share and final call money of Rs 4 per equity share. Out of these, 250 shares were re-issued to Sohan for a total payment of Rs 2,000. Give the journal entries for forfeiture and reissue.

11.X, Y and Z were partners in a firm sharing profits in 3:2:1 ratio. The firm closes its books on 31st March every year. Y died on 12th June, 2015. On Y’s death, the goodwill of the firm was valued at Rs 60,000. On Y’s death, his share in the profits of the firm till the time of his death was to be calculated on the basis of previous year’s profit which was Rs 1,50,000. Calculate Y’s share in the profit of the firm. According to Y’s will, the executors should donate his share to an orphanage for girls. Pass necessary journal entries for the treatment of goodwill and Y’s share of profit at the time of his death. Also, identify the value being highlighted in the question.

12.S, Q and V are partners sharing profit in the ratio of 6 : 4 : 2. They have decided to share equally since 1st April, 2015. They decided that the following unrecorded liabilities should be recorded in the books.
(i)Contingent liability worth Rs 7,000 proved to be actual liability and was to be paid by the firm.
(ii)Bill of Rs 2,000 discounted with the bank has been dishonoured by the drawee.
(iii)Contingent liability worth Rs 25,000 was undertaken by Q for Rs 15,000.
(iv)An employee met with an accident in the factory and suffered serious injuries. The firm has been ordered by the court to pay a compensation of Rs 20,000 to the employee. The firm has made the payment.
(v)Claim for damages by the customer amounting to Rs 8,000 was admitted by the firm and paid.
(vi)The firm lost a litigation case and was ordered to pay a penalty of 116,000 which was paid.

The partnership deed provides for the following
(i)Profits and losses are to be shared in the ratio of 2:2:1 respectively.
(ii)Partners are entitled to interest on capital, which will be allocated in the ratio of their capital investments.
(iii) Partners are also entitled to salaries, which will be allocated in the ratio of time they devoted to firm’s business.
For the year ended 31st March, 2015, the firm earned a profit of Rs 75,000.
You are required to prepare the profit and loss appropriation account for the year ended 31st March, 2015, after taking into account the following information
(i)The contingency in respect of which the reserve was built-up would not materialise hence, is to be written back.
(ii)Chiku devotes three-fourth time; Piku half time and Riku one-fourth time.
(iii) The debit balance of profit and loss account is to be adjusted against current year’s income.
(iv) The following amounts will be distributed to the partners
(a)Rs 18,000 as interest on capital.
(b)Rs 36,000 as partners’ salaries.
(c)Rs 30,000 as share of profits.
The deficiency, if any, is to be adjusted from reserve.

14.(i) Himanshu Jewellers Ltd issued 5,000, 9% debentures of Rs 100 each on 1st April, 2015 redeemable at a premium of 8% after 10 years. According to the terms of prospectus, Rs 40 is payable on application and balance on allotment of debentures. Record the necessary journal entries regarding issue of debentures.
(ii) Kanav Ltd purchased furniture costing Rs 2,20,000. It was agreed that the purchase consideration be paid by issue of 15% debentures of Rs 100 each. Assume, debentures have been issued (i) at par (ii) at a premium of 10%.

15. Ishu and Nishu are partners sharing profits and losses in the ratio of 2 : 1. On 31st December, 2014, the partners decided to dissolve the firm.
Complete the realisation account, partners’ capital account and cash account

16. Mehta Industries has authorised capital of Rs 15,00,000 divided into 1,50,000 shares of Rs 10 each. The company issued a prospectus inviting applications for 90,000 shares of Rs 10 each at a premium of Rs 2 per share, payable as follows On application Rs 2; on allotment Rs 5 (including premium); on first call Rs 3; on second and final call Rs 2.The company received applications for 1,35,000 shares and pro-rata allotment was made in respect of applications of 1,20,000 shares and the remaining applications were rejected. Money overpaid on applications was employed on account of sum due on allotment. All the calls were made.Bablu, to whom 90 shares were allotted failed to pay the two calls. The company decided to forfeit the shares allotted to Bablu. These shares were subsequently re-issued to Riya as fully paid for Rs 9 per share.Pass the necessary journal entries in the books of the company.
Which value has been affected by rejecting the applications of the applicants who had applied? Suggest a better alternative for the same.
or
Sahni Tyres and Company Limited issued applications for 1,00,000 equity shares of Rs 10 each at a premium of Rs 3 per share. The amount was payable as follows:
(i)On application : Rs 2
(ii)On allotment : Rs 5 (including premium)
(iii)Balance on the first and final call.
Applications were received for 1,50,000 shares. Allotment was made on pro-rata basis to all applicants. Amar who had applied for 300 shares failed to pay allotment and call money. His shares were forfeited after first and final call. Of these, 170 shares were re-issued to Amit at Rs 9 per share fully paid.
Pass the necessary journal entries to show the above transactions. Show your working clearly.
Identify the value being adhered by the company by making pro-rata allotment and the value being violated by the shareholder.

17.Aashi, Kiran and Madhu were carrying on partnership business sharing profits in the ratio of 3 : 2 : 1 respectively. On 31st December, 2014, the balance sheet of the firm stood as follows

Kiran retired on the above mentioned date on the following terms
(i)Buildings to be appreciated by Rs 14,000.
(ii)Provision for doubtful debts to be made at 5% on debtors.
(iii)Goodwill of the firm is valued at Rs 36,000 and adjustment in this respect to be made in the continuing partners’ capital account without raising goodwill account.
(iv)Rs 6,000 to be paid to Kiran immediately and the balance in his capital account to be transferred to his loan account.
Prepare revaluation account, capital account and the balance sheet after Kiran’s retirement
or
A, B and C are three partners sharing profits and losses in the ratio of 4:3:3. On 1st January, 2013 their capitals were Rs 50,000, Rs 40,000 and Rs 30,000 respectively. Capitals carried interest @ 5% per annum. During 2013 and 2014 they made profits of Rs 20,000 and Rs 25,000 before allowing interest on capital. Drawings of each partner were Rs 5,000 per year. On 1st January, 2015 the firm was dissolved. Creditors on that date were Rs 12,000. The assets realised Rs 1,30,000. Prepare capital accounts of partners for two years i.e., 2013 and 2014, realisation account, partners’ capital accounts, cash account and memorandum balance sheet.

18.HDFC mutual fund purchases securities worth ? 40 crores as investments. What type of activity is this while preparing cash flow statement?

19.’Sale of marketable securities at par’ would result into inflow or outflow of cash. Give your answer with reason.

20.(i) Under which major headings and subheadings will you record the following items in the balance sheet of a company?
(a)Government securities
(b)Provision for provident fund
(c)Commission received in advance
(d)Uncalled liability on partly paid shares
(e)Outstanding salary
(f)Government securities
(ii) State any two tools for comparison of financial statements.

21.Following is the statement of trading and profit and loss for the year ended 31st March, 2015 and the balance sheet as at that date. 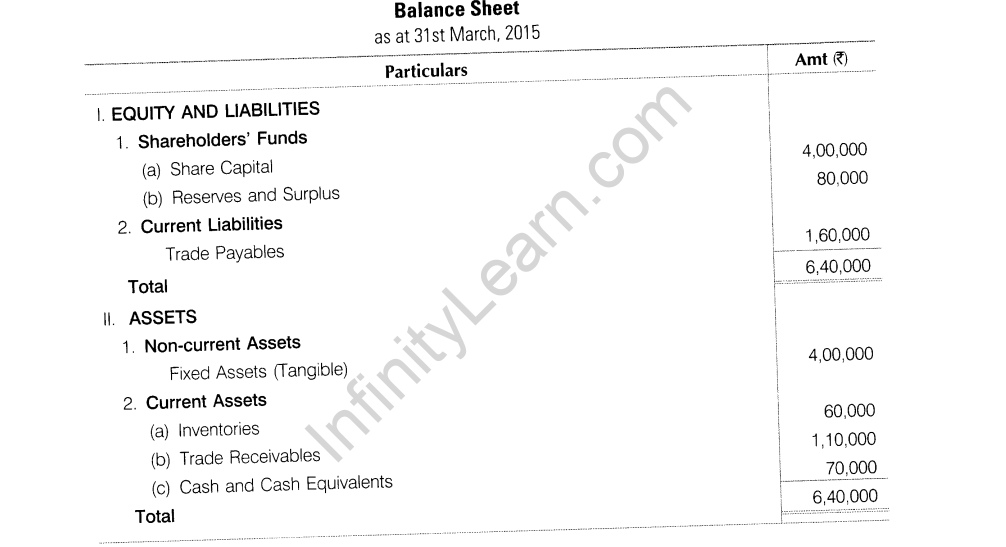 23.From the following balance sheet, prepare the cash flow statement. 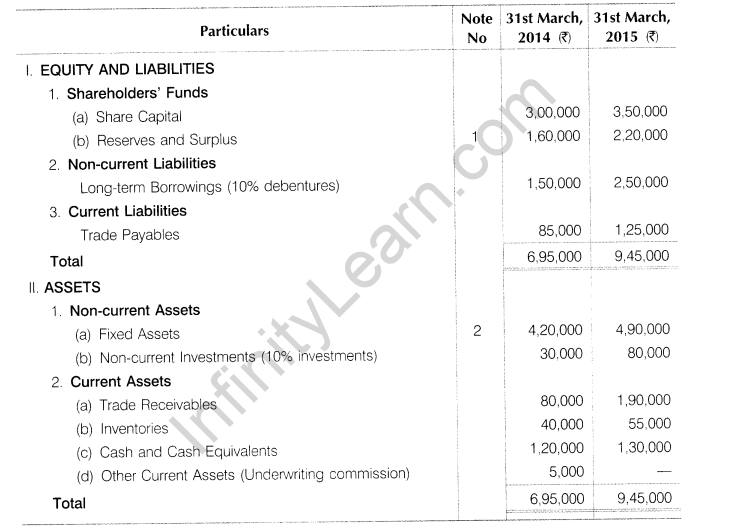