Question 2.
Write the IUPAC name of the given compound: [1]

Question 3.
Which would undergo SN2 reaction faster in the following pair and Why? [1]

Question 4.
Out of BaCl2 and KCl, which one is more effective in causing coagulation of a negatively charged colloidal Sol? Give reason. [1] Answer:
According to the Hardy-Schulze rule, the greater the valency of a flocculating ion, the greater is its power to cause precipitation. Between Ba2+ (from BaCl2) and K+ (from KCl), Ba2+ has greater valency. Therefore, BaCl2 will be more effective in causing the coagulation of a negatively charged colloidal sol.

Question 5.
What is the formula of a compound in which the element Y forms ccp lattice and atoms of X occupy 1/3 rd of tetrahedral voids? [1]

Question 8.
Name the reagents used in the following reactions: [2]

Question 10.
(a) Following reactions occur at the cathode during the electrolysis of aqueous silver chloride solution:
Ag+ (aq) + e– → Ag(s); E0 = +0.80 V
H+ (aq) + e– → \(\frac { 1 }{ 2 }\) H2(g); E0 = 0.00 V
On the basis of their standard reduction electrode potential (E0) values, which reaction is feasible at the cathode and why?
(b) Define limiting molar conductivity. Why the conductivity of an electrolyte solution decreases with decrease in concentration? [2] Answer:
(a) The relationship between the standard free energy change and emf of a cell reaction is given by:
∆G0 = -nFE0
Thus, the more positive the standard reduction potential of a reaction, the more negative is the standard free energy change associated with the process and consequently, the higher is the feasibility of the reaction.
Since E0(Ag+/Ag) has a greater positive value than E0(H+/H) the reaction which is feasible at the cathode is given by
Ag+ (aq) + e– → Ag(s) 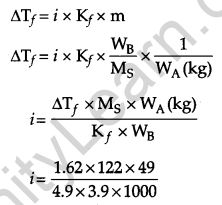 Since, i < 1, hence solute benzoic acid (C6H5COOH) will undergo association in benzene.

(ii) In the presence of ligands, the d-orbitals of transition metal ions split up into two sets of orbitals having different energies. Thus, the transition of electrons takes place from one set to another. The energy required for these transitions is quite less and falls in the visible region of radiation. The ions of transition metals absorb the radiation of a particular wavelength and the rest is reflected, imparting colour to the solution.

(ii) On the basis of crystal field theory, for a d4 ion if, ∆0 < P. then complex is a high spin complex formed by an association of weak field ligands with the metal ion. As a result, the fourth electron enters one of the eg orbitals, thereby, exhibiting the electronic configuration t2g3 eg1

Carbonyl, CO being a strong field ligand causes the pairing of valence electrons in the Ni atom against the Hund’s Rule of Maximum Multiplicity. This results in the formation of an inner orbital complex, [Ni(CO)4]. Since the complex [Ni(CO)4] has no unpaired electron, it is diamagnetic in nature and posses tetrahedral shape. 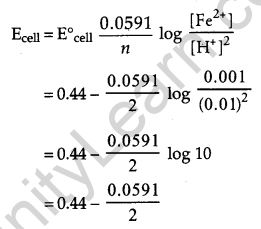 Question 17.
Give reasons for the following observations:
(i) Leather gets hardened after tanning.
(ii) Lyophilic sol is more stable than lyophobic sol.
(iii) It is necessary to remove CO when ammonia is prepared by Haber’s process. [3] Answer:
(i) Animal skin (hide) is colloidal in nature and has positively charged colloidal particles. When a hide is soaked in tanning, mutual coagulation takes place and as a result, leather gets hardened.

(iii) It is necessary to remove CO when ammonia is prepared by Haber’s process because in this process the CO acts as a poison and adversely affects the activity of the iron catalyst, used in the process.

Question 18.
Write the names and structures of the monomers of the following polymers:
(i) Nylon-6,6
(ii) PHBV
(iii) Neoprene. [3] Answer: 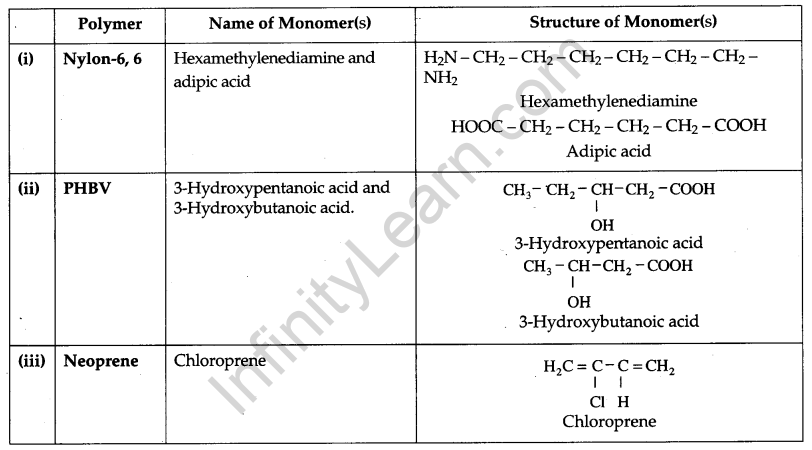 Question 19.
Predict the products of the following reactions: 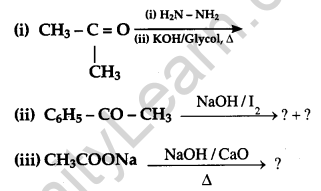 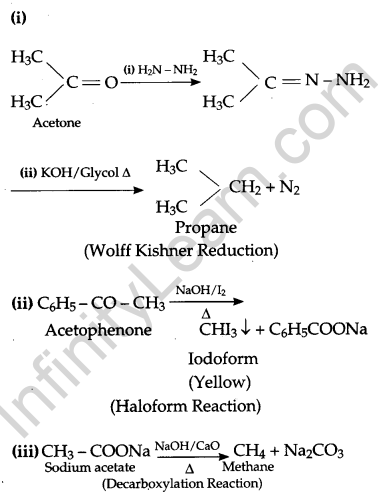 Question 20.
How do you convert the following:
(i) Phenol to anisole
(ii) Propane 2-ol to 2-methyl propane-2-ol
(iii) Aniline to phenol [3] OR
(b) Write the mechanism of the following reaction:

(b) Write the equation involved in the acetylation of Salicyclic acid. [3] Answer:
(i) 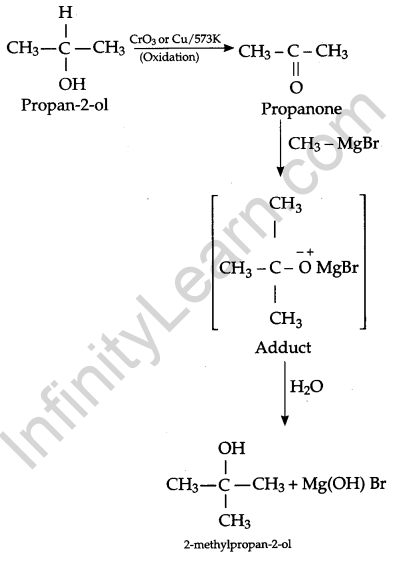 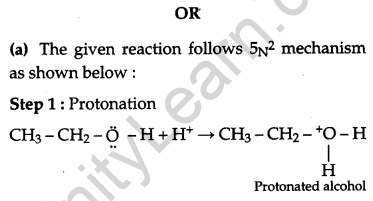 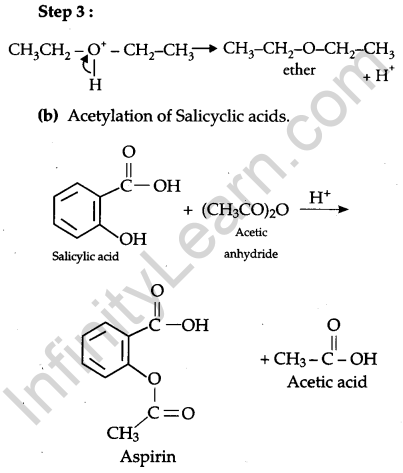 Question 21.
(i) Which one of the following is a disaccharide:
Starch, Maltose, Fructose, Glucose?
(ii) What is the difference between fibrous protein and globular protein?
(iii) Write the name of the vitamin whose deficiency causes bone deformities in children. [3] Answer:
(i) Maltose is a disaccharide, as it contains α-D-glucose units.
(ii)

Question 22.
Give reasons:
(a) n-Butyl bromide has a higher boiling point than t-butyl bromide.
(b) A racemic mixture is optically inactive.
(c) The presence of the nitro group (-NO2) at o/p positions increases the reactivity of haloarenes towards nucleophilic substitution reactions. [3] Answer:
(a) n-butyl bromide is a straight-chain molecule having a larger surface area and therefore, has stronger intermolecular forces. On the other hand, f-butyl bromide (CH3)3 CBr is a branched molecule, so it has a smaller surface area. Hence, it has weaker intermolecular force.

Question 23.
Mr Roy, the principal of one reputed school organized a seminar in which he invited parents and principals to discuss the serious issue of diabetes and depression in students. They all resolved this issue by strictly banning junk food in school and to introduce healthy snacks and drinks like soup, lassi, milk etc. in school canteens. They also decided to make compulsory half an hour of physical activities for the students in the morning assembly daily. After six months, Mr Roy conducted the health survey in most of the schools and discovered a tremendous improvement in the health of students.

After reading the above passage, answer the following:
(i) What are the values (at least two) displayed by Mr Roy?
(ii) As a student, how can you spread awareness about this issue?
(iii) What are tranquillizers? Give an example.
(iv) Why is the use of aspartame limited to cold foods and drinks? [4] Answer:
(ii) As a student, I can spread awareness regarding diabetes and depression among students by conducting seminars, health camps, debates, distribution of templates, and workshops by doctors. So as to highlight the needs to follow healthy eating.

(iii) Tranquillizers are neurologically active drugs that induce a sense of well being and are used to treat stress, anxiety and mild or severe mental disease. They perform their function by inhibiting the message transfer mechanism from nerve to receptor e.g., Equanil, meprobamate and iproniazid etc.

(iv) The use of aspartame is limited to foods and cold drinks because aspartame is unstable at cooking temperature.

Question 24.
(a) Account for the following:
(i) Acidic character increases from HF to HI.
(ii) There is a large difference between melting and boiling points of oxygen and sulphur.
(iii) Nitrogen does not form pentahalide.
(b) Draw the structures of the following:
(i) ClF3
(ii) XeF4 [5] OR
(i) Which allotrope of phosphorus is more reactive and why?
(ii) How the supersonic jet aeroplanes are responsible for the depletion of ozone layers?
(iii) F2 has a lower bond dissociation enthalpy than Cl2. Why?
(iv) Which noble gas is used in filling balloons for meteorological observations?
(v) Complete the equation:
XeF2 + PF5 →
Answer:
(a) (i) The acidic strength of the hydrohalic acids increases from HF to HI because the stability of the acids decreases from HF to HI on account of a decrease in bond dissociation enthalpy of H – X bond from HF to HI.

(iii) Being an element of the second period, Nitrogen has no ‘d’ orbitals and its maximum covalency is restricted to four. Hence, due to the non-availability of d-orbitals, it can’t form pentahalides.

OR
(i) White phosphorus is most reactive of all the allotropes of phosphorus. It is because it exists as P4 discrete tetrahedral units with 60° angle, which results in angular strain and makes it highly reactive. 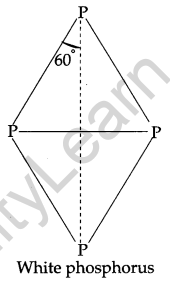 (ii) Since supersonic jets fly in the stratosphere near the ozone layer, they are responsible for the depletion of the ozone layer. The oxide emitted from the exhausts of supersonic jet aeroplanes readily combine with ozone to form nitrogen dioxide and diatomic oxygen.
NO(g) + O3 (g) → NO2 (g) + O2 (g)

(iv) Helium, gas is used for filling of balloons for meteorological observations.

Question 25.
An aromatic compound ‘A’ of molecular formula C7H7ON undergoes a series of reactions as shown below. Write the structures of A, B, C, D and E in the following reactions.

OR
(b) Write the structures of main products when aniline reacts with the following reagents:
(i) Br2 water
(ii) HCl
(iii) (CH3CO)2O/pyridine.
(b) Arrange the following in the increasing order of their boiling point:
C2H5NH2, C2H5OH, (CH3)3N
(c) Give a simple chemical test to distinguish between the following pair of compounds:
(CH3)2NH and (CH3)3N.
Answer: 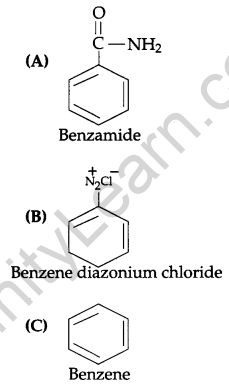 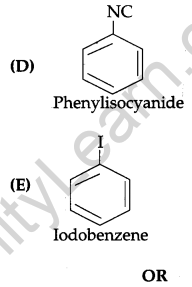 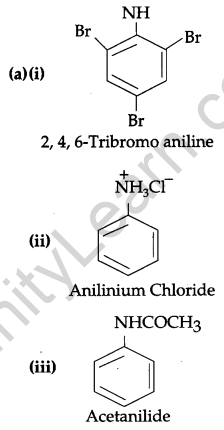 (b) Ethanol has a high boiling point then ethylamine because of oxygen, being more electronegative forms strong extensive hydrogen bond as compared to that of nitrogen. In trimethylamine, there is no hydrogen and hence has the lowest boiling point.
Increasing order or boiling point.
(CH3)3N < C2H5NH2 < C2H5OH. 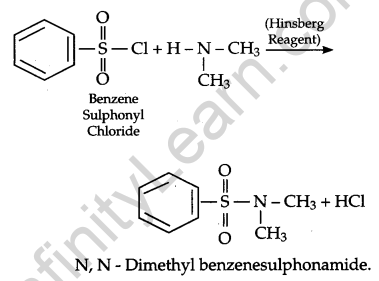 (CH3)3N does not react with benzene sulphonyl chloride.

Question 26.
For the hydrolysis of methyl acetate in aqueous solution, the following results were obtained:

(i) Show that it follows pseudo-first-order reaction, as the concentration of water remains constant.
(ii) Calculate the average rate of reaction between the time interval 30 to 60 seconds. (Given log 2 = 0.3010, log 4 = 0.6021) [5] OR
(a) For a reaction A + B → P, the rate is given by
Rate = k [A] [B]2
(i) How is the rate of reaction affected if the concentration of B is doubled?
(ii) What is the overall order of reaction if A is present in large excess?
(b) A first-order reaction takes 30 minutes for 50% completion. Calculate the time required for 90% completion of this reaction. (log 2 = 0.3010)
Answer:
For the hydrolysis of methyl acetate in aqueous solution: 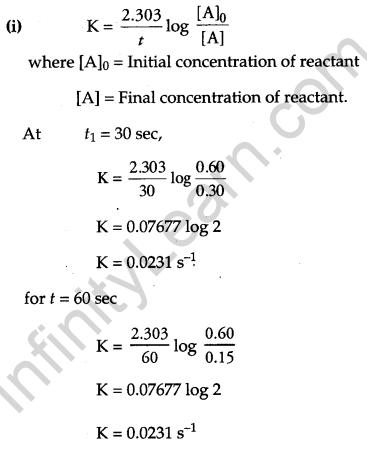 K is the same for both the cases hence it is the pseudo-first-order reaction. 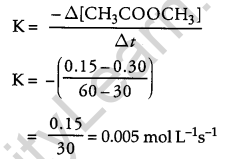 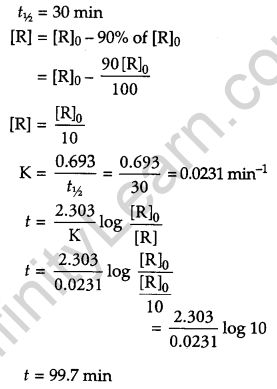