Van Der Waals’s forces include both cohesive and adhesive forces. 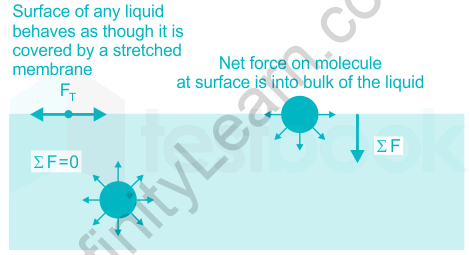 Surface tension is the tendency of liquid surfaces to contract to the smallest possible surface area. Surface tension has two dimensions: Force per unit length and energy per unit area.

The surface tension dimensional formula is as follows:

L stands for length. T is for Time.

Substitute equation (2) in equation (1) later, we get,

The surface tension dimension formula is represented as M1 T-2.

What exactly is Surface Tension? Describe its formula.

What happens if the surface tension fails to hold?

Because the balance is disrupted, the surface tension can only be broken by agitated movement while placing an object denser than water. For example, if we place a small needle on the water's surface, we know it will sink. However, if placed correctly, it will float. This occurs as long as the object does not disrupt or break through the water molecules and separate them. Because the outermost layer of water forms the surface, they must compensate to create a stronger bond between the molecules of water, which creates surface tension.

Now you can find answers to all your subject queries & prepare for your Exams on our Study App – Infinity Learn.