The Reynolds number is a useful parameter for predicting whether a flow condition will be laminar or turbulent because it represents the ratio of inertial forces to viscous forces. It is calculated by multiplying a characteristic length by a characteristic velocity and dividing the result by the kinematic viscosity. When viscous forces are dominant (low Re, slow flow), they are enough to maintain all of the fluid particles in line, resulting in a laminar flow. Even very low Re indicates viscous creeping motion with negligible inertia effects. Turbulent flow occurs when inertial forces dominate viscous forces (when the fluid flows faster and Re is greater). The transition from laminar to turbulent flow is influenced by factors such as surface geometry, surface roughness, free-stream velocity, surface temperature, and fluid type, among others.

If the fluids are Newtonian, the Reynolds number also predicts the viscous behaviour of the flow. As a result, it’s critical to understand the physical situation in order to prevent making incorrect forecasts. Internal and external flows, as well as transition regimes, are the primary subjects of study for the Reynolds number. Fluids with a constant viscosity are known as Newtonian fluids. It makes no difference how much stress is applied to a Newtonian fluid if the temperature remains constant; it will always have the same viscosity. Water, alcohol, and mineral oil are just a few examples.

It is given by the following relation:

Reynolds’ number is Re

ρ = the fluid’s density (in kilogrammes per cubic metre).

The flow velocity is denoted by the letter V.

The pipe diameter is D, and the fluid viscosity is µ .

If the calculated Reynolds number is high (greater than 2000), the flow through the pipe is said to be turbulent. These are numerically acceptable values, but in general, laminar and turbulent flows are classified according to a range. Laminar flow has a Reynolds number less than 1100, while turbulent flow has a number greater than 2200. Laminar flow is a type of flow in which the fluid moves smoothly and in predictable paths. Turbulent flow, on the other hand, is not smooth and follows irregular math with a lot of mixing. 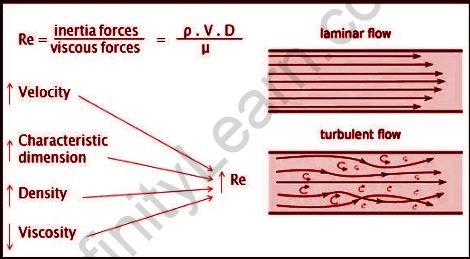 The Reynolds number is named after Osborne Reynolds, a British physicist. He discovered this while studying fluid flow characteristics such as the flow of a liquid through a pipe and the motion of an aeroplane wing through the air. He also noticed that the flow type can abruptly change from laminar to turbulent.

The gas molecules in the atmosphere near an object are disturbed and move around it as it moves through the atmosphere. Between the gas and the object, aerodynamic forces are generated. The magnitude of these forces is determined by the shape of the object, its speed, the mass of the gas passing through it, and two other important properties of the gas: viscosity, or stickiness, and compressibility, or springiness. Aerodynamicists use similarity parameters, which are ratios of these effects to other forces in the problem, to properly model these effects. If the similarity parameters in two experiments are the same, then the relative importance of the forces is correctly modeled. On another page, representative values for air properties are given, but the actual value of the parameter depends on the state of the gas and the altitude.

If the value of Nr is between 0 and 2000, the liquid flow is streamlined or laminar. The flow is turbulent above 4000, and the flow of the liquid is unstable between 2000 and 3000, i.e., changing between the laminar and turbulent flow.

Laminar flow is defined as the smooth flow of layers. It is usually little or no mixing and the fluid velocity is lower. The fluid particle motion is ordered, with no cross currents. This is most common in fluids with high viscosity and at low speeds. For laminar flow, Reynold’s Number is less than 2100.

What does Reynolds Number Mean?

The number of revolutions (Nr) of a liquid flowing through a pipe is defined as the product of density times velocity times length divided by the coefficient of viscosity. The ratio of inertial forces and viscous forces per unit area in a fluid flow determines the value of Nr.

At what Reynolds number is turbulent flow?

If the Reynolds number for external flow is greater than 3500, the flow is turbulent.

What is the critical Reynolds number?

The critical Reynolds number is associated with the laminar-turbulent transition, which occurs when a laminar flow transforms into a turbulent flow. This is an extremely complicated process that is still not fully understood.