The class 10 story, ‘The Sermon at Benaras’, is one of the best stories written by Betty Renshaw from the book, ‘Values and Voices’. In this story, the author depicts how a royal prince leaves all materialistic things behind in search of the truth behind all the sufferings in the whole world. He meets with different people during his journey who helped him to understand the real truth and achieve enlightenment. This story is all about the declaration made by Lord Buddha during his whole journey. Scroll down to read the full summary of the chapter. 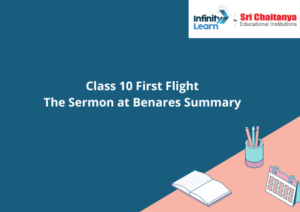 Gautama Buddha was born Prince Siddharth Gautama. People in that time suffered a lot from different diseases and miseries. Siddartha Gautama’s father knew about his son and how sensitive he is towards the pain and agony of the people. He decided to protect him from such miseries and pain of the world, and at twelve, he was sent to study Hindu sacred scriptures. He came back four years later, married a beautiful princess, and had a son. Siddarth Gautama decided to live his pleasant life for more than 10 years without knowing about the pain and griefs in this world.

One fine day, he went out hunting and saw four sights that affected him deeply. He saw a sick man, an aged man, a funeral procession, and a monk begging for alms. Such experiences acted as an eye-opener for him, and he realized he was being protected from the pain and agony of the world. He wanted to understand these sights as well as the sorrow he experienced as a result of them. He left all materialistic things behind and went about seeking a higher sense of spiritual knowledge.

For seven years, he roamed the world. Finally, he sat down under a peepal tree and started to meditate. He decided to remain seated under the tree until he achieved enlightenment. After seven days, he did attain enlightenment, and as a result, renamed the tree ‘Bodhi Tree’ or Tree of Wisdom. He began to teach and share his newfound learnings with others and in doing so, came to be known as the Buddha – The Awakened or the Enlightenment.

He preached his first sermon at Benaras, the holiest of places around the river Ganges. Once upon a time, there was a woman named Kiska Gotami. Her only son had died. She was in great sorrow and went from house to house carrying her son and asking for medicine. Everyone around believed she had gone mad with the grief of losing her son to illness. After a while, Kiska Gotami met a man. The man told her that he could not cure the child, but he knew someone who could. The man asked her to seek Buddha. The lady went to the Buddha and asked him for medicine to cure her child. The Buddha listened to her problem and asked her to bring a handful of mustard seeds. He further added that the mustard seeds should come from a house where nobody had died. Kiska Gotami again went from house to house in search of these seeds. While most people pitied her and gave her the seeds, she was dismayed when she learned that someone had died there. Every house she went to, she heard the same dialogue. There was no home unaffected by the pain of death. Feeling tired and hopeless, she sat down by the road and watched the city lights as they flickered and then went out. Finally, darkness covered the whole city. Kiska Gotami thought about how the lives of people — now here and now gone — are just like the flickering lights.

She understood that death is the bitter truth, and we have to accept it. The Buddha, in his wisdom, made her realize that human life is brief and full of pain. Everyone who is born in this world has to die one day, it is only natural. Like ripe fruits or earthen vessels, human life is always vulnerable to death. According to Lord Buddha, all men, wise or fools, will die. So it is not wise to grieve. Grief brings pain and suffering, affecting the physical and mental health of the living. Grief doesn’t affect death, nor does it bring back the dead person, and one can only achieve peace by overcoming this grief and sorrow.

Conclusion – The Sermon at Benaras Summaries

The chapter, The Sermon at Benaras, tries to impart one of the holiest messages of Lord Buddha, wherein he explains that death is a part of nature and no one can overcome it. Death is the most fundamental truth of life that we all have to accept. Sorrow and grief only increase our pain.

Enjoyed this summary? You can read more of them on our website or find a treasure trove of resources like CBSE notes, study materials, chapter summaries, and more.