The Address is a story by Marga Minco that describes the turmoil that occurs after a conflict. You can feel the pain, grief, and mental anguish that survivors of war have to suffer through. It tells the story of the author, a Jewish woman, who returns to her hometown after the war. Having lost her mother, the author sets out in search of her belongings. The story also discusses how she deals with the world on her own after suffering so much. We learn about the world’s harshness to downtrodden people. She realizes that nothing is kept in material goods, and so she gives up everything and decides to create a new life for herself, moving on from the trauma of her past. As a result, it teaches us about human suffering and consciousness.

The narrator is Mrs S.’s daughter, who returned to her hometown after the war to look for her mother’s items after her mother died. Mrs. Dorling, an old colleague of her mother’s, answered the door at House Number 46 on Marconi Street. The woman was dressed in her mother’s green knitted cardigan, so the narrator recognized her. She inquired whether the woman knew her mother. Despite the narrator’s desire to speak with her for some time, the woman was not willing to and she closed the door. 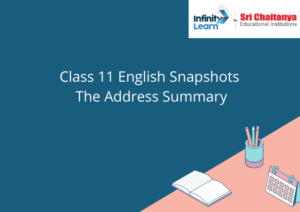 The story shifts to a time when her mother was alive and her homeland, Holland, was in the midst of a war. For a few days, she had returned to her hometown. She discovered that a number of items were missing amongst her mother’s things. Mrs. S had informed her daughter about Mrs. Dorling, who had removed all the vases, antique plates, and china after promising to keep them secure. She would take something home with her every time she left their house.

On the way home on the train, the narrator remembered seeing Mrs. Dorling leave their house the next day with a hefty suitcase. Mrs. Dorling’s features and broad back had caught her attention for a brief while. She inquired her mother about the woman’s location. The narrator’s mother told her about the address at the time: 46 Marconi Street.

After the liberation battle ended, the narrator returned to her hometown. She decided to return after the first failed visit. Mrs. Dorling’s 15-year-old daughter opened the door for her this time. The narrator opted to wait for Mrs. Dorling because she was not at home. She walked alongside the girl down the corridor. She noticed an antique iron candle-stand next to a mirror. She was led into the family room. She found herself in the middle of things she remembered as having belonged to her mother. However, she was distressed to see them organized in such an unappealing manner. She took a seat at a table and realized the tablecloth was hers. Her mother had left a burn mark on the edge, which had not been corrected.

From a white pot with a gold border on the lid, the girl offered her tea. She took some spoons from a box she had opened. All of those things were the narrator’s mother’s possessions. She approached the sideboard with the intention of opening a drawer.

The narrator, on the other hand, did not wish to see any more. She was agitated and so she got up and left, to walk to the train station to catch her train. She’d lost interest in the items that had been removed from her home and placed in unusual locations. She resolved to put the address out of her mind and move on.

Conclusion of the Story:

To conclude, through the summary of the story ‘The Address’, we learn about human emotions like faith, optimism, and betrayal, as well as the negative consequences of war.

Q: ‘Have you returned?’ the woman inquired. ‘I had assumed that no one had returned.’ Does this statement reveal anything about the plot? If so, what exactly is it?

Answer: The statement quoted provides us with a hint about the plot. It indicates that the two families were acquaintances who knew one other and lived in close proximity to one another. During the war, many families fled the country to seek sanctuary in another location, while others remained in the same location. Mrs. Dorling believed that Mrs. S’s family had died during the war, which is why she was so chilly to the girl who came to see her.

Q: The story is split into two parts: pre-war and post-war. What difficulties do you believe the girl faced during this time?

Answer: The story is set in the years leading up to and following World War II. Before the war, the girl’s family was wealthy, and they possessed valuable belongings in their home. When the war broke out, Mrs. Dorling reconnected with them and began visiting them again. She began carrying the valuables with her whenever she visited, believing that such items should not be thrown away if they were to leave the place. The girl had been through a lot; her mother had died, and she was forced to live in a rented apartment. She found it extremely difficult to return to the location where she spent her youth, and she demanded the return of her stuff. She noted how the things were placed in a distasteful fashion when she went to meet Mrs. Dorling. She could no longer connect with them, and she had lost interest in them. As a result, the young lady made the decision to leave the residence and forget the address.

Q: What made the story’s narrator wish to forget the address?

Answer: Mrs. Dorling kept the valuable objects in her house until the war was ended because she didn’t want them to be lost if they decided to leave the area during the war. Mrs. Dorling’s address, ‘46, Marconi Street’, was given to her by her mother. She remembered her address and decided to pay her a visit. She was apprehensive about returning to the location because it triggered so many memories from her past. When she saw all of the belongings, she found them to be arranged in an unappealing manner, and she became disinterested in them. She couldn’t connect with the items and decided she wouldn’t stay at the house any longer since she didn’t want to ruin the nice memories she had with them. She eventually chose to forget the address and avoid returning to the location.

Q: The Address is a story about a human’s plight after a conflict. Comment.

Answer: Human beings are always subjected to a great deal of misery during battle. It brings them both death and devastation. ‘The Address’ revolves around the same subject. During the war, Mrs. Dorling took all of Mrs. S.’s belongings and vowed to keep them safe. The protagonist’s mother died, and all of the protagonist’s belongings were left with a friend. Years later, the girl decided to pay a visit to the house whose address her mother had given her years before. She received no pity from the woman, who even took little effort to recognize her. She assumed her entire family had passed away. The young lady desired to reclaim her belongings. She refused to let the girl into the house. She appeared to be a woman devoid of human feelings. As a result, the battle also affected the humanity in people and not just physical destruction.