Q-1- Describe the tension that existed between the Dutch and the French speaking people in Belgium. [CBSE 2014]
Or
What were the two main causes of resentment in Belgium in 1960 ? How was the conflict solved ? [CBSE 2010]
Ans. (i) The economic inequality between the Dutch¬speaking and French-speaking was the basic cause of tension.
(ii) The French-speaking community who was in minority was relatively rich and powerful whereas the Dutch-speaking community who was in majority was poor.
(iii) This was resented by the Dutch-speaking community who for the benefit of economic development and education much later.
(iv) The tension between the two communities was more acute in Brussels. Brussels presented a special problem : the Dutch¬speaking people constituted a majority in the country, but a minority in the capital.
(v) Between 1970 and 1993, the Belgium government amended their constitution four times so as to work out an arrangement that would enable everyone to live together within the same country. ‘

Q.2. How were the ethnic problems solved in Belgium ? Mention any four steps which were taken by the government to solve the problems ?
Or
How is the political system in Belgium innovative and different from the other countries of the world ? Explain any three points. [CBSE 2008(0)]
Or .
Highlight any three measures adopted by the Belgian government to accommodate regional and cultural diversities. [CBSE 2013, 14]
Ans. (i) Equal number of ministers for both the groups : The Belgian Constitution prescribes that the number of Dutch and French speaking ministers shall be equal in the central government. Some special laws require the support of majority of members from each linguistic group. Thus, no single community can take decisions unilaterally.
(ii) More powers to state governments :
Under the proper power sharing arrangement, many powers of the central government were given to state governments for the two regions of the country. The state governments were not subordinate to the central government. •
(iii) Equal representation at the state and the central level : A separate government has been set up at Brussels in which both the communities have equal representation.
(iv) Formation of community government :
Apart from the central and the state government, there is a third kind of government, i.e., ‘community government’. This ‘community government’ is elected by the people belonging to one language community – Dutch, French and German speaking no matter where they live. This government has the powers regarding cultural, educational and language related issues.

Q.3. Why is Power sharing desirable ? [CBSE Sept. 2010, 2012]
Or
Why is power sharing necessary in democracy ? Explain. [CBSE Sept. 2011 ]
Or
“Power sharing is the very spirit of democracy.” Justify this statement with three suitable points. [CBSE 2012,14]
Or
Why is power sharing desirable ? Give any three prudential reasons.[CBSE 2013]
Ans. 1. Prudential reasons:
(i) Prudential reasons are based on careful calculations of gains and losses. For example in the Nepal movement for
democracy even the Maoists, an armed _ revolutionary group, was given some share after the formation of government. The
major gain for this was peace in Nepal.
(ii) Prudential reasons help to reduce the possibility of conflict between social groups.
(iii) Prudential reasons are good way to ensure political stability.
(iv) Imposing the will of majority community over the minority may look like an attractive option in the short run, but in the long run, it undermines the unity of the nation. Tyranny of the majority is not just oppressive for the minority; it often brings ruin to the majority as well.
2. Moral reasons:
(i) Power sharing is the basic spirit of democracy. A democratic rule involves the sharing of power with those affected by its exercise, and those who have to live with its effects.
(ii) A democratic government is chosen by the people. So they have the right to be consulted on how they are to be governed. A legitimate government is one where groups, through participation, acquire a stake in the system.
(iii) Decentralisation of power, i.e., formation of state governments, local governments is an example of moral reason. 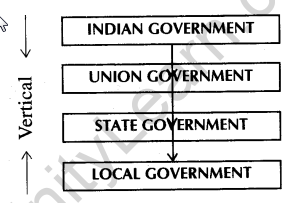 (iii) Power sharing among different social groups : In a democracy, especially, in a multi-ethnic society, power is also shared
among social groups such as the religious and linguistic groups. ‘Community government’ in Belgium is a good example of this arrangement. In some countries, there are constitutional and legal arrangements whereby socially weaker sections and women are represented in the legislatures and the administration.
(iv) Power sharing among political parties, pressure groups and movements : In a democracy, power is also shared among different political parties, pressure groups and movements. Democracy provides the citizens a choice to choose their rulers. This choice is provided by the various political parties, who contest elections to win them. Such competition ensures that power does not remain in one hand. 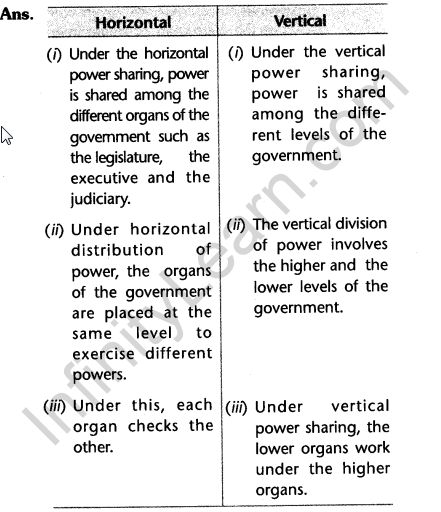 Q.7. Explain the power sharing arrangements among the political parties and pressure groups.
Ans. (i) In a democracy, power is also shared among different political parties, pressure groups and movements.
(ii) Democracy provides the citizens a choice to choose their rulers. This choice is provided by the various political parties, who contest elections to win them. Such competition ensures that power does not remain in one hand.
(iii) In the long run, power is shared among different political parties that represent different ideologies and social groups. Sometimes, this kind of sharing can be direct, when two or more parties form an alliance to contest elections. If their alliance is elected, they form a coalition government and thus, share power.
(iv) In a democracy, various pressure groups and movements also remain active. They also have a share in governmental power, either through participation in governmental committees or having influence on the decision making process.

Q.8. How is a federal government better than a unitary government ? Explain with examples of Belgium and Sri Lanka. [CBSE 2008 (O)]
Ans. (i) Federalism is a system of government under which power is divided between a central authority and its various constituent units. Whereas in a unitary government all the powers are in the hands of a central authority,
(ii) The Belgium leaders tried to solve the ethnic problem by respecting the feelings and interests of different communities and regions by establishing a federal government, whereas the Sri Lankan government tried to solve the problem through majoritarianism.
(iii) The Belgium solution helped in avoiding the civic strife, whereas the majoritarianism in Sri Lanka led to the civil war.

Q.9. What are some of the basic elements of Belgium model of power sharing ? Write any three. [CBSE Sept. 2011, 2012]
Or
Explain any three elements of the Belgiumn model of Power sharing. [CBSE 2013]
Ans. (i) Equal number of ministers : Constitution prescribes that the number of Dutch and French-speaking ministers shall be equal in the central government. Some special laws require the support of majority of members from each linguistic group. Thus, no single community can make decisions unilaterally.
(ii) Power sharing : Many powers of the central government have been given to state governments of the two regions of the country. The state governments are not subordinate to the Central Government.
(iii) Separate government for Brussels : Brussels has a separate government in which both the communities have equal representation. The French-speaking people accepted equal representation in Brussels because the Dutch-speaking community has accepted equal representation in the Central Government.