Unemployment
According to Prof Pigou, “A man is unemployed only when he is both without a job a or not employed and also desires to be employed”.

Common Types of Unemployment in Rural and urban Areas
In India, following types of unemployment are found both in urban and rural areas

Suggestions to Solve the Problem of Unemployment in India

Government Policy and Programmes
Government seeks to solve the problem of unemployment through its poverty eradication programmes generating employment opportunities for poorer sections of the society. Rural employment Guarantee scheme is a significant recent attempt of the government, offering guaranteed employment to those in the rural areas who are below poverty line.

Some of the basic issues related to unemployment in India are emphasised in this chapter. It also addresses the growth rate of Indian economy and various employment generation, schemes. It also specifies the need of transformation of workers from in formal sector to formal sector.

Employment and Informalisation of Indian workforce
Work plays an important role in our lives as an individual or a group of members can earn their living after doing work. Being employed gives us a sense of self-worth and enables us to relate ourselves meaningfully with others. In this way, every working person can actively contribute towards national income.
Thus, there is need to know who is a worker and what is an employment.
A person is classed as a worker if

So, it can be concluded that all those who are engaged in production activities, in whatever capacity high or low, are workers.”

Types of Workers
Broadly, workers can be categorised into self-employed and hired workers. They are discussed below

Hired workers can be of two types

Self-Employed and Hired Workers in India
1. According to Region (Rural and Urban) 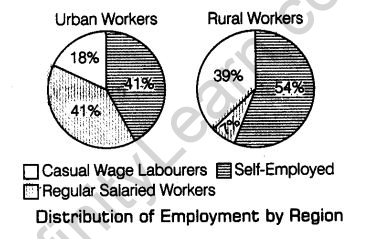 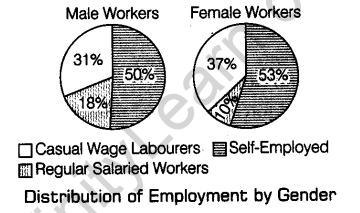 So, it can be concluded that self-employment is a very important source of livelihood for people in India. Size of Workforce in India. India has a workforce of nearly 40 crore of people.
The data on the size of workforce In India are as follows

Employment
It is a relationship between two parties i.e. employer and the employee who are binded in a contract of doing something valuable or it is an act of employing or state of being employed.

The nature of employment in India is multifaceted. Some get employment throughout the year or some others get employed for only a few months in a year. Many workers do not get fair wages for their work but still while estimating the numbers of workers, all those who are engaged in productive activities are included as employed.
Terms associated with workers and employment are accumulated below

The above data reveals the following

Employment in Firms, Factories and Offices
In the course of economic development of a country, labour flows from agriculture and other related activities to industry and services. In this process, workers migrate from rural to urban areas.
Generally, we divide all productive activities into different industrial divisions, they are as follows

Growth and Changing Structure of Employment
During the period 1960-2000, Gross Domestic Product (GDP) of India grew positively and was higher than the employment growth. However, there was always fluctuation in the growth of GDP. During this period, employment grew at a stable rate of about 2%.

In 1972-73, about 74% of workforce was engaged in primary sector and in 2009-10, this proportion has declined to 53%. Secondary and service sectors are showing promising future for the Indian workforce.The distribution of workforce in different status indicates that over the last four decades (1972-2010), people have moved from self employment and regular salaried employment to casual wage work. Yet self-employment continues to be the major employment provider.
The movement of labour from regular workers to casual wage workers is known as The Process of casualization. 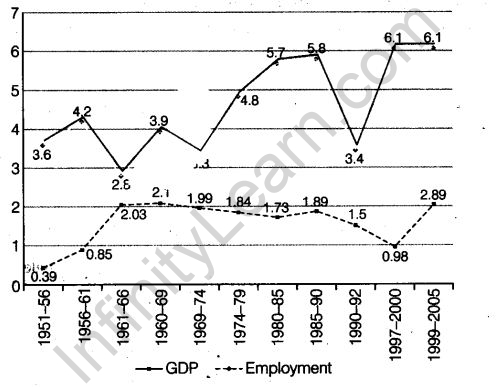 The chart given above points that in the late 1990s, employment growth started declining and reached the level of growth that India had in the early stages of planning. During these years, there is a widening gap between the growth of GDP and employment. This means that in the Indian economy, without generating employment, we have been able to produce more goods and services. This phenomenon is referred as Jobless Growth.
Distribution of workforce by industrial sectors shows substantial shift from farm work to non-farm work.

Informalisation of Indian Workforce
Development planning in India is always focused to provide decent livelihood to its people. It was thought that the industrialisation strategy would bring surplus workers from agriculture to industry with better standard of living as in developed countries. Over the years, the quality of employment has been deteriorating. A small section of Indian workforce is getting regular income. The government through its labour laws, enable them to protect rights in various ways. This section of workforce forms trade unions, bargains with employers for better wages and other social security measures.
Workforce can be classified into two categories

Informalisation in Ahmedabad Ahmedabad is a prosperous city with its wealth based on the produce of more than 60 textile mills with a labour force of 150000 workers employed in them. These workers had, over the course of the century, acquired a certain degree of income security.

They had secure jobs with a living wage, they were covered by social security schemes protecting their health and old age. They had a strong trade union which not only represented them in disputes but also ran activities for the welfare of workers and their families. In the early 1980s, textile mills all over the country began to close down. In some places, such as Mumbai, the mills closed rapidly.

In Ahmedabad, the process of closure was long drawn out and spread over 10 years. Over this period, approximately over 80000 permanent workers and over 50000 non-permanent workers lost their jobs and were driven to the informal sector.

The city experienced an economic recession and public disturbances, especially communal riots. A whole class of workers was thrown back from the middle class into the infor mal sector, into poverty. There was widespread alcoholism.

Unemployment
In every section of society there will be a large number of unemployed persons. It is a situation, in which all those who, owing to lack of work are not working but either seek work through employment exchanges, intermediaries, friends or relatives or by making applications to prospective employers or express their willingness or availability for work under the prevailing condition of work and remunerations.

Types of Unemployment in India 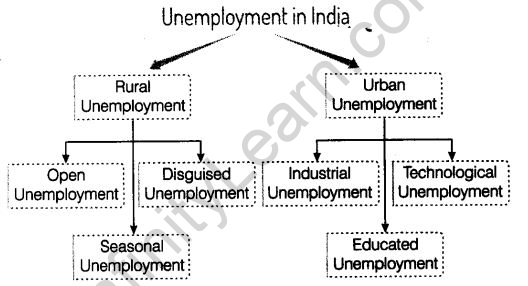 1. Rural Unemployment
Around 70% of India’s population lives in village. Agriculture is the single largest source of their livelihood. Agriculture suffers from a number of problems like dependence upon rainfall, financial constraints, obsolete techniques, etc.
Rural unemployment can be of following three types

Causes of Unemployment in India
1. Slow Economic Growth In Indian economy, the rate of economic growth is very slow. This slow growth rate fails to provide enough employment opportunities to the rising population. Supply of labour is much more than the available employment opportunities.
2. Rapid Growth of Population Constant increase in population has been a grave problem of India. It is one of the main causes of unemployment. The number of unemployed has actually increased instead of decreasing during the plan period.
3. Faulty Employment Planning The Five Year Plans in India have not been designed for employment generation. A frontal attack to solve the problem of unemployment is missing. It was thought that economic growth will take care of unemployment problem.
4. Excessive Use of Foreign Technology Lack of scientific and technical cosearch at home, due to its high cost has resulted in excessive use of foreign technology which has led to technical unemployment in our country.
5 Lack of Financial Resources The expansion and diversification programme of agriculture and small scale industries have suffered because of lack of financial resources. This has been accompained by increasing government control of economic activities.
6. Increase in Labour Force The population explosion stage of Indian economy has added young people to the labour force who are seeking employment.

Government and Employment Generation
In 2005, the government had passed an act in parliament known as the National Rural Employment Guarantee Act, 2005. It promises 100 days of guaranteed wage employment to all rural households who volunteer to do unskilled manual work. This scheme is one of the important measure adopted by government to generate employment for those who are in need of jobs in rural areas.

Since independence, the Union and State Government have played an important role in generating employment or creating opportunities for employment generation. Their efforts can be broadly categorised into two i.e., direct and indirect.

These programmes aim at providing not only employment but also services in areas such as primary health, primary education, rural drinking water, nutrition, assistance for people to buy income and employment generating assets, development of community assets by generating wage employment, construction of houses and sanitation, assistance for constructing houses, laying of rural roads, development of waste lands/degraded lands.