We depend on the resources to sustain ourselves in the surrounding areas. Primitive societies subsisted on ‘natural means of subsistence’, i.e. edible plants and animals.

Importance of Geography: Geography helps us to understand the diversity and the causes and factors that have created it. Through geography we understand how spherical earth is presented through a map and we get information about soil, minerals, weather, climate, population, means of transport and communication, local landscape, etc. It also tells us about rivers, mountains, plateaus, plains, deserts, seas, lakes and cultural facts.

The term geography was first coined by Eratosthenese, a Greek scholar (276-194 BC.). The word has been derived from two roots from Greek language geo (earth) and graphos (description). Put together, they mean description of the earth. The earth has always been seen as the abode of human beings and thus, scholars defined geography as, “the description of the earth as the abode of human beings”.

Geographers do not study only the variations in the phenomena over the earth’s surface (space) but also study the associations with the other factors which cause these variations. For example, cropping patterns differ from region to region but this variation in cropping pattern, as a phenomenon, is related to variations in soils, climates, demands in the market, capacity of the farmer to invest and technological inputs available to her/him.

Geography as a discipline is concerned with three sets of questions:

A geographer is required to have a broad understanding of all the related fields, to be able to logically integrate them. A geographer should have some proficiency in mathematics and art, particularly in drawing maps. Geography is very much linked with the study of astronomical locations and deals with latitudes and longitudes. The cartographic and quantitative techniques require sufficient proficiency in mathematics, statistics and econometrics.

All the social science disciplines, viz. sociology, political science, economics and demography study different aspects of social reality. The branches of geography, viz. social, political, economic and population and settlements are closely linked with these disciplines as each one of them has spatial attributes. 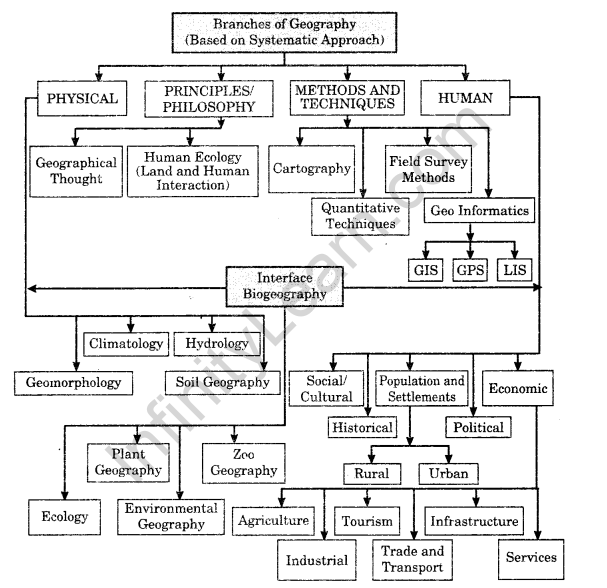 The major approaches to study geography have been