Ecosystem—Structure and Function,- Productivity and Decomposition:

1. An ecosystem is a functional unit of nature, where living organisms interact among themselves and also with the surrounding physical environment. The word ‘Ecosystem’ was coined by Sir AG Tansley (1935).

2. The size of an ecosystem varies greatly from a small pond to a large forest or a sea.

4. Crop fields and an aquarium are considered as man-made ecosystems.

5. Structure and Function of Ecosystem
(i) Each ecosystem consists of biotic (autotrophs, herbivores and carnivores) and abiotic components and their interactions with each other results in a physical structure, that is characteristic for each type of ecosystem.
(ii) Identification and enumeration of plant and animal species of an ecosystem gives its specific composition.
(iiii) Vertical distribution of different species occupying different levels is called stratification. For example, trees occupy top vertical strata or layer of a forest, shrubs the second and herbs and grasses occupy the bottom layers.
(iv) Major functional components of an ecosystem are:
(a) Productivity (b) Decomposition
(c) Energy flow (d) Nutrient cycling
(v) Let us understand these components in a pond ecosystem:
(a) A pond is a shallow water body in which all the above mentioned basic structural and functional components are present.
(b) Abiotic components are water with all the dissolved inorganic and organic materials and soil deposited at the bottom.
(c) Autotrophic components are phytoplanktons, some algae and the floating, submerged and marginal plants found at the edges.
(d) Consumers are zooplanktons, which are free swimming and bottom dwellers.
(e) Decomposers are the fungi, bacteria and flagellates found abundantly in the bottom.
(f) Functioning of pond ecosystem occurs in following steps:
* Autotrophs convert inorganic material into organic material with the help of solar energy.
* Heterotrophs consume autotrophs.
* Decomposers decompose dead organic materials and mineralise it to release them back for reuse by the autotrophs.
* The above events are repeated again and again.
Unidirectional movement of energy occur towards the higher trophic levels and lost in the form of heat to the environment. 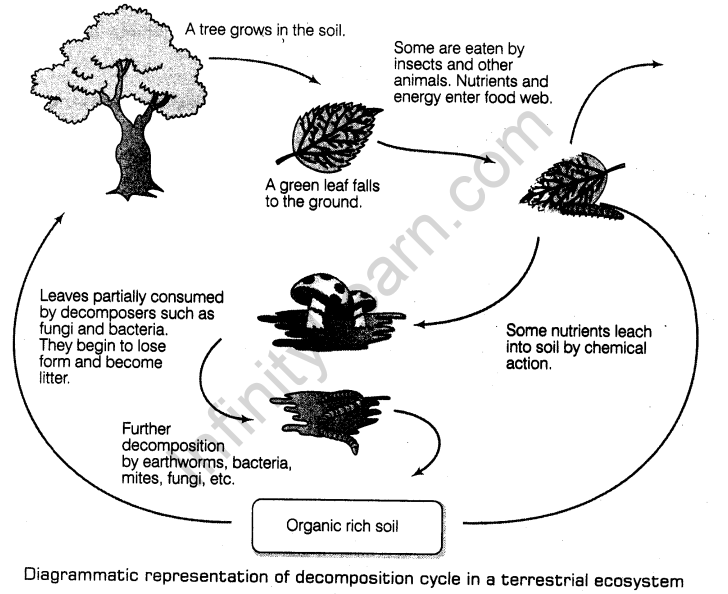 Leaves partially consumed by decomposers such as fungi and bacteria.
They begin to lose form and become litter.
Diagrammatic representation of decomposition cycle in a terrestrial ecosystem
(iii) Decomposition rate depends on
(a) Oxygen availability
(b) Chemical composition of detritus
(c) Climatic factors
(d) Temperature and soil moisture
(iv) Decomposition rate is slower, if detritus is rich in lignin and chitin. It is quicker, if detritus is rich in nitrogen and water soluble substances like sugars.
(v) Warm and moist environment speeds up decomposition, whereas low temperature and anaerobiosis inhibits decomposition and causes the formation of organic materials.