• Chemical Equilibrium
In a chemical reaction chemical equilibrium is defined as the state at which there is no further change in concentration of reactants and products.
For example,

Rate of melting of ice = Rate of freezing of water.
The system here is in dynamic equilibriums and the following can be inferred.
(a) Both the opposing processes occur simultaneously
(b) Both the processes occur at the same rate so that the amount of ice and water – remains constant.
(ii) Liquid-Vapour Equilibrium
The equilibrium can be represented as

Rate of evaporation = Rate of condensation
When there is an equilibrium between liquid and vapours, it is called liquid-vapour equilibrium.

(iii) Solid-Vapour Equilibrium
This type of equilibrium is attained where solids sublime to the vapour phase. For example, when solid iodine is placed in a closed vessel, violet vapours start appearing in the vessel whose intensity increases with time and ultimately, it becomes constant.

Here dissolution and precipitation take place at the same speed.
On adding a small amount of radioactive sugar to the saturated solution it will be found that the sugar present in the solution as well as in the solid-state is radioactive.\

• Equilibrium between a Gas and its Solution in Liquid
This type of equilibrium can be seen by the following example:
Let us consider a sealed soda water bottle in which C02 gas is dissolved under high pressure. A state of equilibrium is attained between CO2 present in the solution and the vapours of the gas.

Henry’s law: The solubility of a gas in a liquid at a certain temperature is governed by Henry’s law. It states that the mass of a gas that dissolves in a given mass of a solvent at any temperature is proportional to the pressure of the gas above the surface of the solvent.

• Equilibrium in Chemical Processes
Like equilibria in physical systems, it can also be achieved in a chemical process involving reversible chemical reactions carried in a closed container.

The dynamic nature of chemical equilibrium can be demonstrated in the synthesis of ammonia by Haber’s process. Haber started his experiment with the known amounts of N2 and H2 at high temperatures and pressure. At regular intervals of time, he determined the amount of ammonia present. He also found out the concentration of unreacted N2 and H2.
After a certain time, he found that the composition of the mixture remains the same even though some of the reactants are still present. This constancy indicates the attainment of equilibrium. In general, for a reversible reaction, the chemical equilibria can be shown by

After a certain time, the two reactions occur at the same rate and the system reaches a state of equilibrium. This can be shown by the given figure. 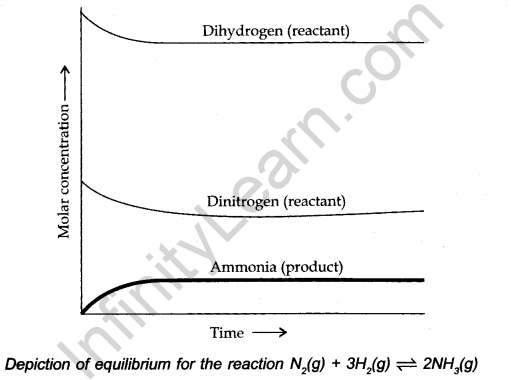 • Equilibrium in Homogeneous System
When in a system involving reversible reaction, reactants and products are in the same phase, then the system is called a homogeneous system.
For Example,

After some time it can be observed that equilibrium is formed. The equilibrium can be seen by constancy in the colour of the reaction mixture. 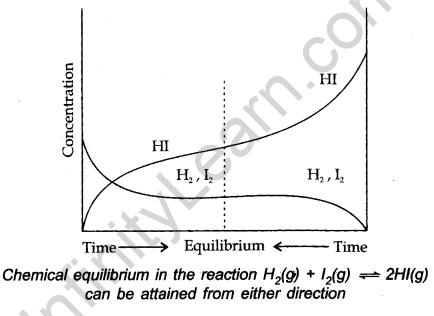 • Law of Chemical Equilibrium
At a constant temperature, the rate of a chemical reaction is directly proportional to the product of the molar concentrations of the reactants each raised to a power equal to the corresponding stoichiometric coefficients as represented by the balanced chemical equation. Let us consider the reaction, 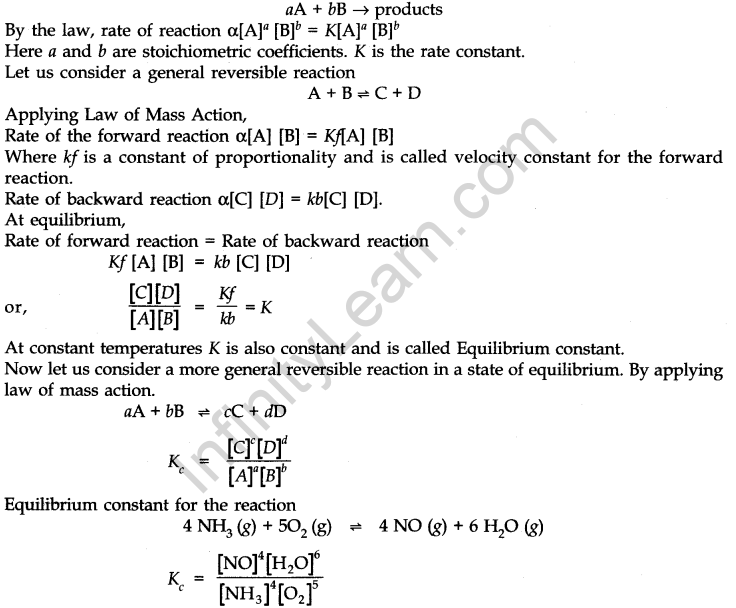 • Relationship between Equilibrium constant K, reaction Quotient Q and Gibbs energy G.
A mathematical expression of the thermodynamic view of equilibrium can be described by the tine equation.

Le Chatelier’s principle: If a system under equilibrium is subjected to a change in temperature, pressure or concentration, then the equilibrium shifts in such a manner as to reduce or to counteract the effect of change.

Effect of Change of Concentration: When the concentration of any of the reactants or products in a reaction at equilibrium is changed, the composition of the equilibrium changes to minimise the effect.

Effect of Inert Gas Addition
If the volume is kept constant there is no effect on equilibrium after the addition of inert gas.

Reason: This is because the addition of inert gas at constant volume does not change the partial pressure or the molar concentration.
The reaction quotient changes only if the added gas is involved in the reaction.

Effect of Temperature Change
When the temperature of the system is changed (increased or decreased), the equilibrium shifts in the opposite direction to neutralize the effect of change. An exothermic reaction, low temperature favours forward reaction e.g.,

Effect of a Catalyst
Catalyst does not affect the equilibrium composition of a reaction mixture.
Reason: Since catalyst increases the speed of both the forward and backward reactions to the same extent in a reversible reaction.

Acids: Acids are the substances that turn blue litmus paper to red and liberate dihydrogen by reacting with some metals.

• Arrhenius Concept of Acids and Bases
Acids: According to Arrhenius theory, acids are substances that dissociate in water to give hydrogen ions H+(aq).

Bases: Bases are substances that produce OH–(aq) after dissociation in water.

• Limitations of the Arrhenius Concept
(i) According to the Arrhenius concept, an acid gives H+ ions in water but the H+ ions do not exist independently because of its very small size (~H-18 m radius) and intense electric field.
(ii) It does not account for the basicity of substances like ammonia which does not possess a hydroxyl group.

• Acid and Base as Conjugate Pairs
The acid-base pair that differs only by one proton is called a conjugate acid-base pair.
Let us consider the example of the ionization of HCl in water.

• Ionization of Acids and Bases
The strength of acid or base is determined with the help of the extent of ionization in an aqueous solution.

the logarithm of the reciprocal of the hydrogen ion concentration.

The energy required to break the bond decreases, H-A becomes a stronger acid.
As the size of A increases down the group, H-A bond strength decreases and so the acid strength increases.
In a period, as the electronegativity of A increases, the strength of the acid increases.

• Hydrolysis of Salts and the pH of their Solutions 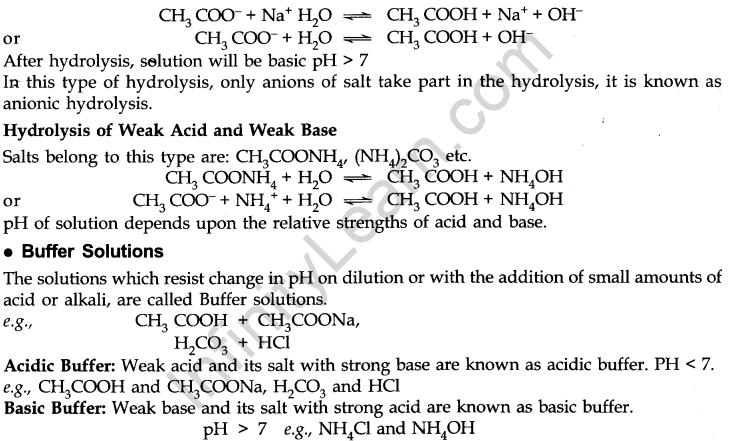 • Solubility Products
It applies to a sparingly soluble salt. There is an equilibrium between ions and unionised solid substances.

• Equilibrium: It can be established for both physical and chemical processes. At the state of the equilibrium rate of forwarding and backward reactions are equal.

• Equilibrium constant: Kc is expressed as the concentration of products divided by reactants each term raised to the stoichiometric coefficients. For reactions,

• Le Chatelier’s principle: It states that the change in any factor such as temperature, pressure, concentration etc., will cause the equilibrium to shift in such a direction to reduce the effect of the change.

• Arrhenius Concept: According to Arrhenius, acids give hydrogenous while bases produce hydroxyl ions in their aqueous solution.

• pH Scale: Hydronium ion concentration in molarity is more conveniently expressed on a logarithmic scale known as the pH scale. The pH of pure water is 7.

• Buffer solution: It is the solution whose pH does not change by the addition of a small amount of strong acid or base.

• Solubility product (Ksp): For a sparingly soluble salt, it is defined as the product of the molar concentration of the ions raised to the power equal to the number of times each ion occurs in the equation for solubilities.