Question 2.
Write the IUPAC name of the given compound: [1]

Question 4.
Which would undergo SN1 reactions faster in the following pair: [1] 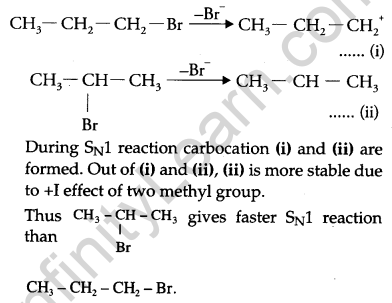 Question 5.
What is the formula of a compound in which the element Y forms ccp lattice and atoms of X occupy 273rd of tetrahedral voids? [1]

Question 6.
Write one similarity and one difference between the chemistry of lanthanides and that of actinides. [2] Answer:
Similarity

Differences between lanthanoids and actinoids

Question 8.
Write the reagents required in the following reactions: 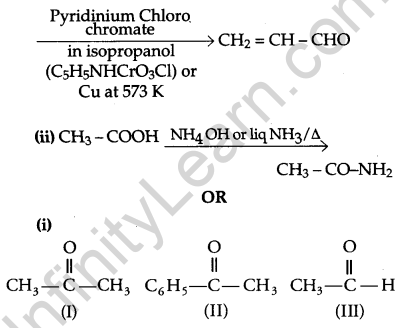 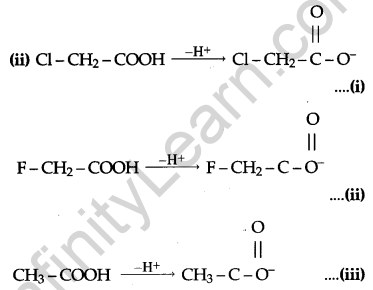 (ii) SiO2 combined with the iron in the copper ore to form iron(II) silicate slag which is easily removed. Thus it (SiO2) acts as a flux to remove the impurity of Iron oxide.

Question 13.
(i) Which one of the following is a polysaccharide:
Starch, maltose, fructose, glucose.
(ii) Write one difference between α-helix and β-pleated sheet structures of the protein.
(iii) Write the name of the disease caused by the deficiency of vitamin B12. [3] Answer:
(i) Starch is a polysaccharide.
(ii)

(iii) Pernicious Anaemia caused by the deficiency of Vitamin B12.

[CoF6]3- has four unpaired electrons. thus it is paramagnetic. 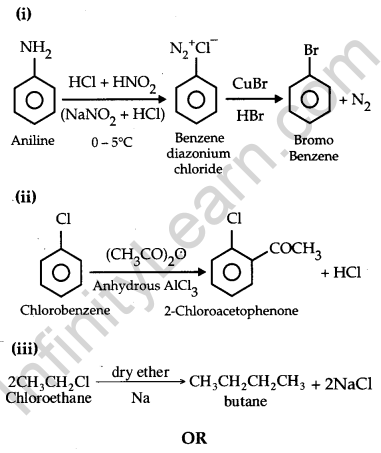 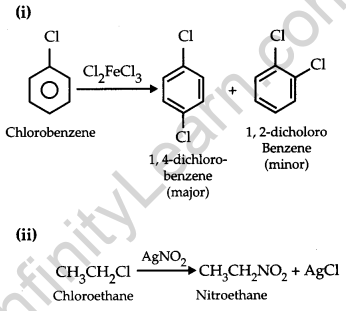 Question 16.
Examine the given defective crystal: 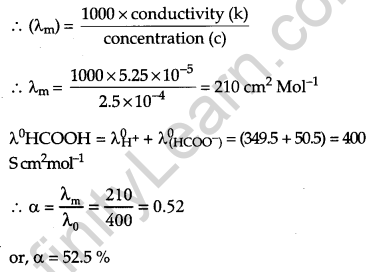 Question 18.
Write any three differences between Physisorption and Chemisorption. [3] Answer:

(ii) Due to the presence of lone pair on oxygen which causes repulsion, the bond angle in alcohol is slightly less than tetrahedral angle (109028′).

Question 20.
Predict the products of the following reactions: [3] 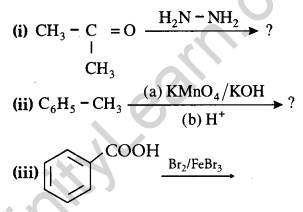 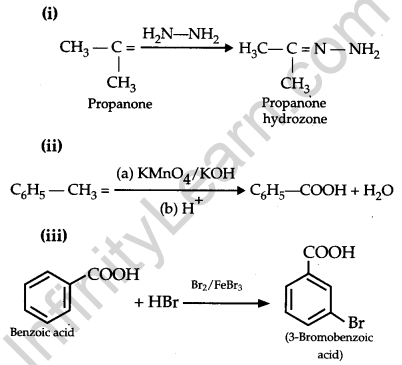 Question 21.
(a) Account for the following:
(i) Cu+ is unstable in an aqueous solution.
(ii) Transition metals form complex compounds.
(b) Complete the following equation:
Cr2Cr2O7– + 8H+ + 3NO–2 → [3] Answer:
(a) (i) 2Cu+(aq) → Cu2+(aq) + Cu(s)
The higher stability of Cu2+ ion in aqueous solution is due to its greater negative charge than Cu. It compensates the second ionisation enthalpy of Cu involved in the formation of Cu2+ ions.

Question 22.
Write the names and structures of the monomers of the following polymers:
(i) Terylene
(ii) Buna-S
(iii) Neoprene [3] Answer:

Question 23.
Seeing the growing cases of diabetes and depression among young children, Mr Chopra, the principal of one reputed school organized a seminar in which he invited parents and principals. They all resolved this issue by strictly banning junk food in schools and introducing healthy snacks and drinks like soup, lassi, milk, etc. in school canteens. They also decided to make compulsory half an hour of daily physical activities for the students in the morning assembly. After six months, Mr Chopra conducted the health survey in most of the schools and discovered a tremendous improvement in the health of the students.

After reading the above passage, answer the following questions:
(i) What are the values (at least two) displayed by Mr Chopra?
(ii) As a student, how can you spread awareness about this issue?
(iii) Why should antidepressant drugs not be taken without consulting a doctor?
(iv) Give two examples of artificial sweeteners. [4] Answer:
(ii) Awareness can be spread by performing nukkad Natak in community, displaying posters, cartoons and slogans and by conducting seminars.

(iii) Antidepressant drugs have lots of side effects like indigestion, headache, stomach aches, drowsiness, weight gain. That is why it should not be taken without consulting with doctors.

Question 24.
(a) Account for the following:
(i) Acidic character increases from HF to HI.
(ii) There is a large difference between the melting and boiling points of oxygen and sulphur.
(iii) Nitrogen does not form pentahalide.
(b) Draw the structures of the following:
(i) ClF3
(ii) XeF4 [5] OR
(i) Which allotrope of phosphorus is reactive and why?
(ii) How are the supersonic jet aeroplanes responsible for the depletion of the ozone layer?
(iii) F2 has a lower bond dissociation enthalpy than Cl2. Why?
(iv) Which noble gas is used in filling balloons for meteorological observations?
(v) Complete the following equation:
XeF2 + PF5 → [5] Answer:
(a) (i) Size of halide ions is of the order
F– < Cl– < Br– < I– with increase in size negative charge is dispersed throughout ions and ions gets stabilized. Thus acidity order
HF < HCl < HBr < HI.

(ii) Due to the presence of vacant d-orbital and combining forms of sulphur (S8) which is not present in oxygen, the cohesive energy of sulphur is more than oxygen leading to large melting point and boiling point. 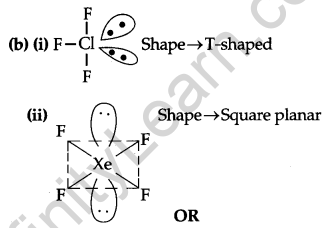 (ii) The exhaust emitted from supersonic jet aeroplane contains CO2, NO and other particles which are the killers of stratospheric ozone layer along with the supersonic sound produced by these aeroplanes are destroy the ozone layer.

(iii) Due to the smaller size and high electronegativity of fluorine, more energy is required to break the bond of F2 than Cl2. Thus F2 has lower bond dissociation energy than Cl2.

(iv) Helium (He) gas is used in filling balloons for meteorological observations because it is non-inflammable and light gas.

Question 25.
An aromatic compound ‘A’ of molecular formula C7H6O2 undergoes a series of reactions as shown below. Write the structures of A, B, C, D and E in the following reactions: [5] 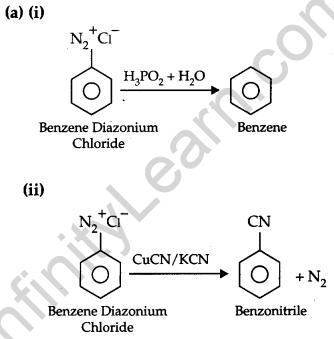 (c) C6H5 – NH2 (Primary amine) and C6H5 – NH – CH3 (Secondary amine) can be distinguished by Hinsberg’s test. In this test, amines are allowed to react with Hinsberg’s reagent, benzene sulphonyl chloride (C6H5SO2Cl). Primary amines react with this reagent to form N-alkyl benzene sulfonyl amide which is soluble in alkali but secondary amines give sulphonamide which is insoluble in alkali.

Question 26.
For the hydrolysis of methyl acetate in aqueous solution, the following results were obtained:

(a) Show that it follows pseudo-first-order reaction, as the concentration of water remains constant.
(b) Calculate the average rate of reaction between the time interval 10 to 20 seconds.
(Given: log 2 = 0.3010, log 4 = 0.6021). [5] OR
(a) For a reaction A + B → P, the rate is given by Rate = k[A][B]2
(i) How is the rate of reaction affected if the concentration of B is doubled?
(ii) What is the overall order of reaction if A is present in large excess?
(b) A first-order reaction takes 30 minutes for 50% completion. Calculate the time required for 90% completion of this reaction.
Answer: 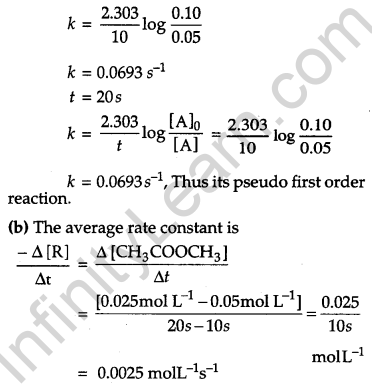 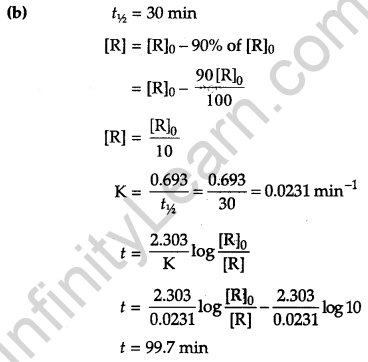 Note: All questions are same in Outside Delhi Set II and III.