3. Some of the measures taken for awareness of reproductive health are:
(i) The family planning programmes were initiated in India in 1951 and were periodically assessed over the past decades. The programmes were improved and covered reproduction-related areas under the popular name Reproductive and Child Healthcare (RCH) programmes. It was launched in 1997.
Major tasks of RCH programme are:
(a) Creating awareness among the people about reproduction related aspects.
(b) Providing facilities and support for building up a reproductively healthy society. Governmental and non-governmental agencies have taken various important steps to create awareness among people about reproduction-related aspects.
(ii) In schools, introducing sex education is a good step to provide right information for adolescents to discourage them from believing in myths and misconceptions about sex-related issues. Adolescents should be informed about reproductive organs, adolescence and related changes, safe and hygenic sexual practices, Sexually Transmitted Diseases (STDs), AIDS, etc.
(iii) Married couple or those in marriageable age group should be educated about available birth control options, care of pregnant mothers, postnatal care of the mother and child, importance of breast feeding, equal opportunities for the male and the female child, etc. This will lead to the formation of socially conscious healthy families of desired size.
(iv) Successful implementation of action plans like providing medical assistance and care to reproduction-related problems, pregnancy, delivery, STDs, abortions, contraception, menstrual problems, infertility, etc., needs strong support and infrastructural facilities.
(v) Statutory Ban on amniocentesis It is a prenatal diagnostic technique in which a sample of amniotic fluid is taken from the uterus of a pregnant women to detect the early development of foetus. The benefits of amniocentesis are the diagnosis of chromosomal abnormalities and developmental disorders of foetus. However, it is being misused for sex-determination of foetus that leads to female foeticides. Therefore, statutory ban on amniocentesis for sex determination keeps check on female foeticides.\

5. Methods to prevent population explosion are:
(i) Raising the marriageable age to 18 years for females and 21 years for males.
(ii) Couples with small families should be given sdme incentives.
(iii) Birth control is an important step to control the population growth by motivating smaller families to use contraceptive methods.

6. Contraceptive methods are ideal if they are used friendly, easily available, effective, reversible with no side effects and non-interferring with the sexual drive, desire and the sexual act.
There are several methods of birth control. These are categorised mainly as follow:

(i) Natural method of birth control involves avoiding chances of sperm and ovum meeting. It can be achieved by:
(a) Periodic abstinence in which couples avoid coitus from day 10-17 (Fertile period) of the menstrual cycle. In this period, ovulation is expected to occur and chances of fertilisation are very high. Also called as rhythm method or natural family planning.
(b) Coitus interruptus also called ‘rejected sexual intercourse’ or ‘pull-out’ method or withdrawal. In this method, the penis is withdrawn, from the vagina just before ejaculation.
(c) Lactational amenorrhea refers to the absence of menstruation during the period of lactation following parturition. Because ovulation does not occur in this period, the chances of conception are none. This method is reliable for a maximum period of six months after delivery.

(ii) Barrier methods are based on prevention of ovum and sperm from physically meeting with the help of barriers. Barriers may be chemical or mechanical.
(a) Condoms are mechanical barriers made of thin rubber or latex sheath to cover the penis in male or vagina and cervix in females which prevent meeting of sperm and ova. Condoms also provides protection sexually transmitted diseases. They are disposable and can be self inserted and thereby gives privacy to the user.
(b) Diaphragms, cervical caps and vaults are also mechanical barriers, made of rubber that are inserted into the female reproductive tract to cover cervix during coitus. They are reusable.
(c) Spermicidal creams, jellies and foams are chemical barriers, usually used along with these barriers to increase their contraceptive efficiency.

(iii) Intra Uterine Devices (IUDs) are the devices introduced in the uterus through vagina by doctors or expert nurses. These are of following types:
(a) Non-medicated IUDs, e.g. lippes loop.
(b) Copper-releasing IUDs, e.g. Cu-T, Cu-7, multiload 375.
(c) Hormone-releasing IUDs, e.g. progestasert, LNG 20.
IUDs prevent contraception in the following ways:
(a) Increase phagocytosis of sperms within the uterus.
(b) Some IUDs suppress sperm motility and fertilising ability of sperm by releasing copper ions.
(c) The hormone releasing IUDs make uterus unsuitable for implantation and make the cervix hostile to sperms.
IUDs are ideal contraceptives for females who want to delay pregnancy. It is one of most widely accepted contraception method in India.

(iv) Oral contraceptives are hormonal preparations in the form of pills.
(a) Pills are small doses of either progestogens or progesterone-estrogen combinations.
(b) Oral pills alter/inhibit ovulation and implantation and also modify the quality of cervical mucus to prevent/retard entry of sperms.
(c) Oral pills have to be taken daily for a period of 21 days starting within the first five days of menstrual cycle.
(d) Saheli an example of oral contraceptive developed by scientists at Central Drug Research Institute (CDRI) Lucknow, contains a non-steroid called centchroman. It is a once-a-week pill, with very few side effects.

(v) Replants or injections are effective for longer period, although their mode of action is similar to oral contraceptives. Progesterone alone or in combination with estrogen are used by females as injections or implants under the skin.

(vi) Emergency contraceptives included administration of progesterone or progestogen
oestrogen combinations or IUDs within 72 hours of coitus. It has been found to be very effective to avoid possible pregnancy due to rape or casual unprotected intercourse.
Both of these techniques are highly effective but poorly reversible.

Sterilisation or surgical methods are used by male/female partner as a terminal method to prevent any more pregnancies. These methods blocks the transport of gametes and prevent contraception.
(a) Vasectomy is applied in case of males. In this method, a small portion of vas deferens is removed or tied up through an incision on the scrotum.
(b) Tubectomy is applied in females, where a small part of Fallopian tubes is removed or tied up through a small incision in the abdomen or through vagina.

(7) Medical Termination of Pregnancy (MTP) or induced abortion is intentional or
voluntary termination of pregnancy before full term.
(a) The Government of India had legalised MTP in 1971 with some strict conditions to avoid its misuse. These are important to check indiscriminate and illegal female foeticides which are reported to be high in India.
(b) MTPs are done in certain cases where pregnancy can be harmful and even fatal either to the mother or the foetus or both, or duets failure of contraceptive used during coitus or rapes.
(c) MTPs are considered relatively safe during the first trimester (upto 12 weeks) of pregnancy.
(d) During second trimester, MTPs are unsafe and could be fatal too.
(e) About 45-50 million MTPs are carried out in a year all over the world. It has significant role in decreasing population though it is not meant for that purpose. 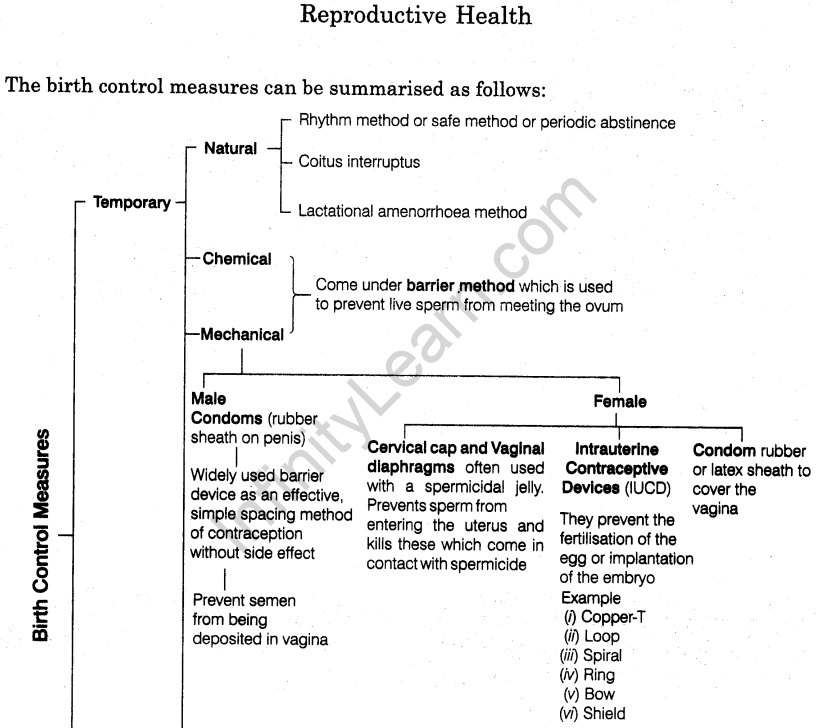