** Answer is not given due to change in present syllabus

Question 2.
What are economic activities ? [1] Answer:
Economic activity defines as any activity which results in production and distribution of goods and services. They are undertaken by the people to satisfy their economic needs.

Question 3.
Define the term ‘Transport Network’. [1] Answer:
Several places (nodes) joined together by a series of routes (links) to form a pattern which permit vehicular moment or flow of some commodity is called transport network.

Question 7.
What is criterion for the classification of pollution ? [1] Answer:
Different types of pollution are classified on the basis of medium through which pollutants are transported and diffused.

Question 8.
What is the subject-matter of the study of human geography ? Explain any three facts. [3] Answer:

(ii) Defence: During the times of political instability, war, hostility of neighbouring groups villages were built on defensive hills and islands. In India, most of the forts are located on higher grounds or hills.

Question 15.
Explain five factors that influence the industrial location in the world. [5] Answer:
Factors influencing the industrial location are :
(i) Access to Market : Industries are looking for locations as near as possible to their markets. It helps in reducing the transport cost and enables the consumer to get things at cheaper rates. Ready market is also essential for perishable and heavy commodities.

(ii) Access to Raw Material: The raw materials is very important for the manufacturing industry. The raw materials which get reduced in weight during manufacturing process influence the industry to be located near the source, for example, location of sugar mills in Maharashtra and western Uttar Pradesh and Iron and Steel industry in West Bengal-Bihar-Odisha belt.

(iii) Access to Labour Supply : The availability of both unskilled and skilled, or technically qualified manpower, is an important factor that influences the location of industries. Some of the small scale industries traditionally associated with labour is glasswork (Firozabad), brass-work (Moradabad), utensils (Yamunanagar in Haryana), silk sarees (Varanasi), carpets (Mirzapur), etc.

(iv) Access to Sources of Energy: Regular supply of power is a prerequisite for the localization of industries. Coal, mineral oil and hydro-electricity are the three important conventional sources of power. Most of the industries are located near the source of power; for example, the iron and steel industry which depends on large quantities of cooking coal as source of power are located near the coal fields.

(v) Access to Transport and Communication : A good network of transport and communication facilities are essential for industrial development as it helps in procurrent of raw materials and distribution of finished products to the market.

Question 16.
Define the term ‘nomadic herding’. Explain its any four characteristics. [5] Answer:
Nomadic herding is a primitive subsistence activity in which the herders rely on animals for food, clothing, shelter, tools and transport. They move from one place to another along with their livestock.

Question 21.
In the given political outline map of the world, five features A, B, C, D and E have been shown. Identify these features with the help of the information given below and write their correct names on the lines drawn near them. [5] (A) The country having the highest rank in Human Development Index-2003
(B) Railway terminal station
(C) An important airport
(D) A major seaport
(E) A mega city

Question 22.
On the given political outline map of India, locate and label the following with appropriate symbols :
(i) The state having the smallest area.
(ii) The leading jute producing state.
(iii) An oil refinery in Haryana.
(iv) An integrated Iron and Steel Plant in Chhattisgarh.
(v) The international airport in Karnataka.
Answer: 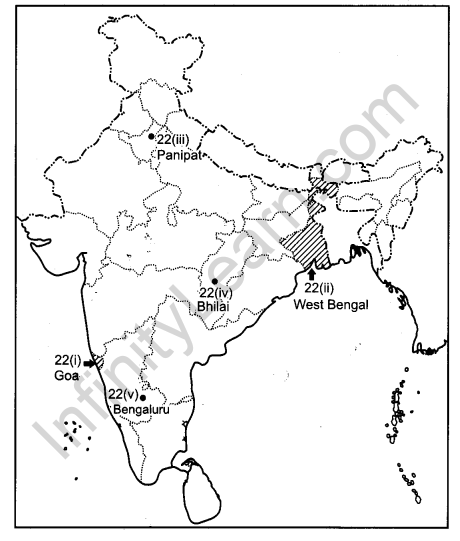 Question 13.
How is environment pollution caused ? Mention the four types of pollution responsible for the environmental degradation. [3] Answer:
Pollution is the introduction of contaminants into the natural environment that causes adverse change. Pollution can take the form of chemical substances or energy, such as noise, heat or light.

Question 17.
Describe the journey of development of land transport from the days of humans as carriers and the cable ways of todays. [5] Answer:
Land transport is an important part of India’s economy as most of the moment of goods takes place over land. In the early days, human beings themselves carried palki or doli on certain occasions such as marriage and ceremonies. Later, animals were used to carry load and treated as beasts of burden. Invention of the wheel revolutionised the means of transport-carts and wagons, railways steam engine, invention of combustion engine-motors, cars and trucks, pipelines, ropeways and cableways have made the life of human easy.

Question 18.
Census of India is the source of population data in India. [5] Answer:
India has uneven distribution of the population. The population of India as per 2011 census was 1,210,193,422. India added 181.5 million to its population since 2001. India has 2.4% of the world’s surface area, accounts for 17.5% of its population. Uttar Pradesh is the most populous state with roughly 200 million people. A little over 5 out of 10 Indians live in the six states of Uttar Pradesh, Maharashtra, Bihar, West Bengal, Andhra Pradesh and Madhya Pradesh. The share of the population is very small in the states like Jammu and Kashmir, Arunachal Pradesh and Uttrakhand. This uneven spatial distribution of population in India suggests a close relationship between population and physical, social, economic and historical factors. Rugged terrain and unfavourable climatic conditions are primarily responsible for sparse population in some areas. Hilly, dissected and rocky nature of the terrain, moderate to low rainfall, shallow and less fertile soils influence population in hilly areas. Flat plains with fertile soils and abundant rainfall have resulted in large number of people to settle in the densely populated northern plains. The distribution of population in India is also governed by physical features, industrial development, urbanization, economic development, availability of natural resources, agricultural development, transport facilities etc.

Question 13.
How do industries pollute India’s water bodies ? Explain with examples. [3] Answer:
Industry is a main source of water pollution, it produces pollutants such as wastes, polluted waste water, poisonous gases, chemical residuals, numerous heavy metals, dust, smoke etc., that are extremely harmful to people and the environment. Many industrial facilities use freshwater to dispose waste from the plant into the rivers, lakes and oceans by directly or indirectly discharging pollutants into water bodies without adequate treatment. Pollution affects the entire biosphere including plants and organisms living in these water bodies. Major polluting industries are leather, pulp and paper, textiles and chemicals.

The ‘civil societies’ should work to building up opinion for reduction in the military expenditure. In a nuclearised world, peace and well being are major global concerns.