Q.8. Explain any three causes of deterioration in the quality of soil in India.
Ans. The decline in the quality of soil and washed away of fertile top soil due to natural or man made causes like overgrazing and deforestation etc. Following are the causes of soil pollution:
•Soil pollution is causes by deforestation.
•Overgrazing by animals also causes soil erosion.
•Improper use of land like shifting cultivation causes mass soil erosion in the mountaineous region.
•Excessive use of chemical fertilisers and pesticides exploit nutritious content of the soil.
•Improper disposal of industrial effluents and urban sewage cause soil pollution.
•Improper mining activities, such as grinding of limestone cause mass soil pollution.

Q.11.How the Girmit Act (Indian Emigration Act) was not in favour of indentured labourers. Justify this statement.
Ans. (i) The first wave of migration was mainly during the colonial period. It was a forceful migration of poor Indian peasants of Uttar Pradesh and Bihar as plantation workers mainly to the Surinam, Fiji and Mauritius etc.
(ii)The social economic condition of Indian migrants were miserable and they were treated as slaves.
(iii)The migrants of India revived their socio – cultural values through folk songs, dialects and folk dances. Due to their values Bhojpuri is the national language of Mauritius. The political leaders of Fiji, Mauritius, and Trinidad and Tobago came India to identify their ancestral roots and land.

Q.12. Explain three measures taken for Water Conservation.
Ans. Following measures are taken for the water conservation :
•Construction of dams on rivers. The maximum capacity of storing water at present, under construction and under planning of dams in India can be 4 crore hectare metres, which is less than the demand of water. Therefore, the need is to construct more dams on rivers for increasing the capacity of storing water.
•Use of New Techniques of Irrigation. A lot of water is wasted in flood and improper irrigational methods. It is necessary to adopt new techniques of irrigation such as sprinkling, fountain and dip. These techniques not only save water but also help in maintaining the soil fertility.
•Recycling of Polluted Water. Today the technology has developed to make polluted water consumable. Three R’s should be compulsory, these are ‘Reduce’, ‘Recycle’ and ‘Reuse’. These techniques are helpful in controlling growth of weeds and increased yields.

Q.13. Explain retail trading services. Write down its three features.
Ans. Retail trading services is the business activity which is concerned with direct sale of goods to the consumers. The main features of the retail trading services are as follows :
•The retail trading take place in fixed establishments and mainly devoted to selling.
•Retail trade is the most universally important economic activity, ranking first in the employment structures in most cities.
•Street peddling, handicrafts, trucks, mail order, telephone, automatic vending machines and internet are examples of non store retail selling.

Q.14. Describe in brief the different trends of population growth in the world from early period to the Present day.
Ans. The five different trends of population growth in the world are as follows :
•In the initial phase of human history, the human population growth was at a snail speed. The hazardous climatic conditions and the migratory character and the poor nourishment were all unfavourable for the growth of population. After the last Ice age about 10,000 years ago before birth of Christ only 1 lakh to 10 lakh people were in the world.
•During the period of agricultural revolution man learnt to grow crops and live in settlement often on river banks. Availability’of food gave some stability to man, death caused by hunger declined. Nutrition in food and other comforts, i.e„ medical facilities, sanitation etc. helped them to live longer life. It was during this period the early Greeks began to differentiate between the inhabited and uninhabited world. In Ecumene, agriculture was the main occupation. It occupied only just 5-10 per cent of the earth’s surface, about 8,000 to 12,000 years ago. In the first AD the world’s population was estimated at around 25.6 crores.
•The dawn of industrial revolution is attributed to 1750 AD. Before this period new and unknown lands were discovered in the course of voyages and discoveries. At the beginning of the industrial revolution, the population of the whole world was around 50 crores.
•The development in the means of transport such as in place of human and animal power. Steam engine and mechanisation received great encouragement. Development in the transport made, the mobility of people easy from one place to other. The population growth in the 1930 was 2 billion.
•Many demographers have presented their own estimates from time to time. According to one estimate, the total population of the world in 2010 will be 6.8 million, in 2020 about 8 billion and in 2200 it will cross 10 billion.

Q.15. Classify the major sea-ports on the basis of the specialised tasks performed by them.
Ans. On the basis of the specialised tasks performed by the sea, ports are classified as follows : Passenger Ports. These are the ports of passenger liners. They are concerned with passenger traffic. Mumbai, London and New York are passenger ports.
Commerical Ports. Such ports which basically handle, the goods for imports and exports. Kolkata, Singapore are the commercial ports.
Oil Ports. These ports are used for export of oil by tankers. Some ports are used for the processing of oil and are called refinery ports. Maracaibo of Venezuela and Tripoli in Lebanon are tanker ports. Abadan in Iran is a refinery port.
Ports of call. These ports have developed on busy and important oceanic routes. At such ports, ships halt for refuelling and supplies of food and water and move to its destination Singapore, Honolulu and Aden are ports of call.
Packet Stations. These are ferry ports. Short sea-route ships halt here. Passengers get in or get down from the ships as ports. Dot-packets are also loaded and unloaded here. In this type of ports generally two, such stations are in front of each other. Dover (England) on one side of English channel and Calais (France) on the other side.
Entrepot Ports. Ports where goods are brought from different countries for export. Singapore is an entrepot for Asia, Rotterdam for Europe and Copenhagen for the Baltic region.
Naval Ports. These are the ports which have only strategic importance. These ports serve the worship and have repair workshops for them. Kochi and Karwar ports are naval ports.

Q.16. Describe the factors influencing the human impact on environment.
Ans. There is dynamic relationship between population, environment and development. With the progress of civilisation environment deterioration has increased. The development of agriculture and industries are two greatest achievements of man. These developments degraded the quality of environment.
•Hunting and Gathering stage. There was very low population during this phase. In this period human was directly co-related to his environment for his sustenance. He ate raw flesh, raw roots, fruits and leaves of plants, and in this stage man was directly dependent on nature. His impact on environment was almost negligible.
•Agricultural Stage. After the domestication of plants, early human being started a settled life. They destroyed the forest cover and built up his settlements. He learnt to make use of natural raw material to satisfy his needs. The degradation of environment increased at an accelerated pace with the progress of man.
•Industrial Stage. With the invention of machines in the beginning of 17th century man’s working capacity and his power to interfere with nature increased several fold. The advent of technology man now began to exercise control over the nature. The overutilisation of resources led to deterioration of environment. Man now became not only the consumer of environment but also its destroyer. He was no longer the nature’s slave or its companion but its enemy.
•The Increasing Population. The impact of density of population and its growth makes an important contribution to pollution of our environment. Sir Robert Malthus raised his voice regarding the decline of resources as compared to the over growing human resource. Resources are spatially distributed in the world, developed countries with the help of technology fastly exploiting resources, whereas the developing countries growing by population and resources are shrinking.

Q.17. Describe the main features of our international trade after independence.
Ans. Following are the main characteristics of our international trade after independence :
•It has only increased in volume and vaiue but the changes in its direction have also taken place. We are no longer tied to the one side trade relations with Great Britain and other commonwealth countries as was the position before the attainment of independence.
•We now supply both the raw materials and manufactured goods to foreign countries.
•Our main exports are tea, jute, cotton, iron-ore, coffee and engineering goods etc. We import machinery, mineral oil, long staple, cotton, chemicals, copper, transport equipment paper, newsprint, fertilisers etc.
•We are having increasing trade relations with USA, Canada, Australia, Japan, Russia, Europe and oil producing countries rather than with Great Britain.
•Our exports now enable us to import specialised machinery, oil, certain ores etc., which are in short supply in our country.

Q.18. Elaborate any five major problems of India agriculture.
Ans. Agriculture is the main occupation of people of India. It is the source of living for about 70% of its working population. It is the base of Indian economy. Despite its dominant role, agriculture has not been able to provide the basic needs of the country. Our agriculture has failed to meet the foodgrains requirements of the country.
The five major problems associated with the Indian agriculture are as follows :
(i)Pressure of Population on Land-: Due to continuous increase in population, pressure of population on land is increasing. Due to overcrowding, the per capita cultivated land in India has been reduced to only 0.3 hectares. It has resulted in shortage of foodgrains. The growth rate in agriculture is also low.
(ii)Inadequate Irrigation Faci-lities : In India, agriculture depends on monsoonal rainfall. Due to uncertain and variable rainfall irrigation is necessary. Only 22% of cultivated land is irrigated. It is necessary to irrigate at least 50% of the cultivated land to make it a success. Moreover, irrigation is required to increase the yield productivity and the intensity of cropping to check the severe draught.
(iii)Low Productivity: In India, the yield per hectare of foodgrains and other crops is low as compared to other countries of the world. High yielding varieties have been introduced. But only 16% of the cultivated land is under high yielding varieties.
(iv)Poor Techniques of Pro-duction : Due to continuous agriculture over a long period, the fertility of soils is declining. To maintain its fertility, the use of chemical fertilisers is necessary. Indian farmers have been using old and inefficient methods due to which there is low productivity . Use of better quality seeds and pesticides can increase the productivity.
(v)Lack of Mechanised Farming: Agriculture is mostly intensive. Human labour is used to get maximum output. Use of modern machines is limited due to low purchasing power r of farmers. The government has been taking some steps to remove the drawbacks of
the agriculture. A new strategy has been adopted to bring many improvements in the economic, technical and organisational form of the agriculture in India.

Q.21. On the given outline map of the World, the following five features are shown. Identify these features and write their correct names on the lines marked near each feature.
(i)Terminal station of Trans-Australian railway
(ii)Sea port of USA
(iii)The most populous country of Africa continent
(iv)Mega city of South America
(v)Areas of dairy farming 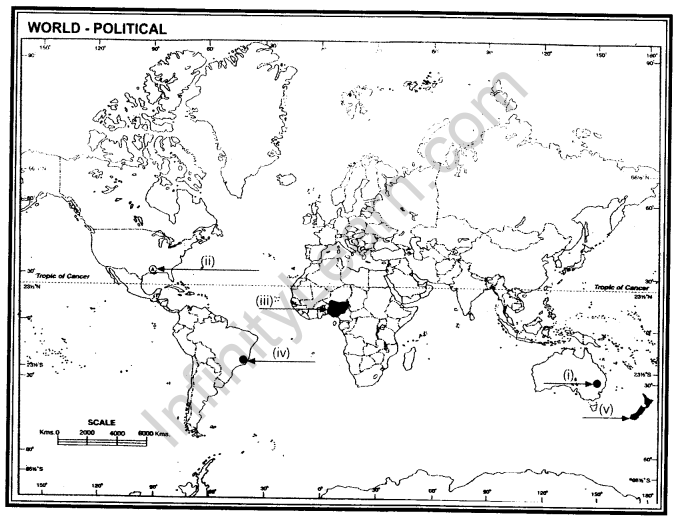 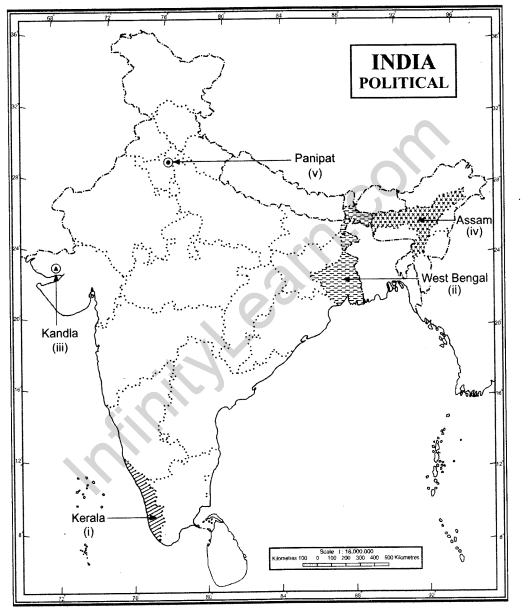