Q.11. Explain any four difference between rural and urban settlements in India.
Ans.

Q.12.Development is the mixed bag of opportunities as well as neglect and deprivations.
Justify the statement in the form of value based.
Ans. The above statement is absolutely correct:
(i)There are few area like the metropolitan cities and other developed enclaves that have all the modern facilities available to a small section of people of its population.
(ii)Where as the other extreme of it, there are large rural areas and slums in the urban areas that do not have the basic amenities like potable water, education and health available to majority of this population.
(iii)The situation is more alarming if one at the distributions of the development-opportunities among different sections of our society. It is a well established the fact the majorities of the scheduled caste, scheduled tribe, landless agricultural labors, poor farmers and slums dwellers etc are the most marginalized lot.

Q.13. State any eight effects of air pollution on environment in India.
Ans. The eight effects of air pollution on environment in India are:
(i)The air pollution modifies the weather and climate.
(ii)Adversly affects the human health and biotic community.
(iii)Chlorofluorocarbons cause depletion of ozone layer which enables ultraviolet rays of the sun to reach the earth and increase atmospheric temperature.
(iv)It causes urban smog.
(v)Contaminates rain water.
(vi)Causes diseases of lungs, heart, nervous and circulatory system. –
(vii)Increase in the concentration of carbon-dioxide and other poisonous gases in the atmosphere and causes Greenhouse effect raising the atmospheric temperature.
(viii) Children especially are at maximum risk from the air pollution. 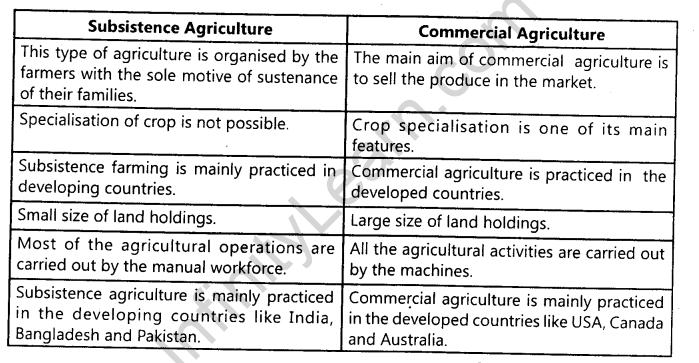 Q.15. What is the importance of satellite system? Describe in brief the two groups of satellite system used in India.
Ans. In the modern communication system satellite plays an important role as it has revolutionized the communication system of the country. India is today organising satellite communication on its own strength. Today India has the capacity to launch satellites even for the other country.
(i)Indian National Satellite System (INSAT): The system mainly used for communication, meteorological observations and other data collection programmes. It was established in 1983.
The INSAT system satellite are built in India by ISRO but launched from other country.
(ii)Indian Remote Sensing Satellite System (IRS): This system was started in 1988 and IRS-IA was commissioned in March 1988. With this the system also become operational. So far two series of satellites of this system have been launched.

Q.16.Name the five types of urban settlements in the world. Write one main feature of each type.
Ans.The urban settlements mainly depend on the size and .the service available and functions rendered. Urban centres are designated as follow :
(i)Town: It is a place having a municipality or an grea under notified area committee. The population ranges from 2,000-20,000. It may have predominance of tertiary functions as well as headquaters, stations, colleges etc.
(ii)City: It has a population more than 1,00,000. It is diversified and might have transport terminals, regional administrative offices and major financial institutions. Cities are more larger than towns.
(iii)Conurbation : The term ‘conurbation’ is first used by Patrick Geddes in 1915. Cities or towns coalesce with each other due to expansion of industries and grow together economically but politically indifferent Greater London, Noida, Gurgaon, Chicago are the examples.
(iv)Megalopolis: The term ‘Megalopolis’ derived from Greek word which means ‘Great City’ and this concept was popularised by Jean Gottman (1957). It is a chain of metropolitan areas coalesce to form Megalopolis.lt has super metropolitan character with the greatest urban growth and was named by Jean Gottman. Washington and Boston of the USA are the best examples.
(v)Million city: The number of million cities in the world has been increasing as have earlier. London reached the million mark in 1800, followed by Paris in 1850, NewYork in 1860.

Q.17.Why is human development necessary in India ? Explain any five reasons.
Ans.Human development is necessary because :
•Better living conditions are provided to the aspiring people and have the wide range of opportunities to choose for the enrichment of their life and to enjoy freedom.
•The main aim of ‘Human Development’ is to reduce the.gap between the rich and the poor. It gives healthy civil society and attains social stability.
•Human development reduces enimity with each other, it increases awareness promotes peace as communal riots, crimes etc., are reduced in the society. It provides a strong platform to the government.
•As the human development takes place, people are given wider choices, and helpful in alleviating poverty. People check desertification, deforestation and soil erosion which they were doing earlier to earn their livelihood because human development is eco-friendly also.
•Human development helps in attaining higher productivity. When people live healthy well nourished life and are highly educated and skilled in varied technologies, they become the most important assets to attain productivity. So unless their health, education and training is taken care the productivity cannot be attained or in other words we can say that development cannot be attained.

Q.18.Classify minerals into two groups on the basis of chemical and physical properties and give one example of each group. Mention any two features of the three mineral belts in India.
Ans.On the basis of chemical and physical properties the two types of minerals are:
(i)Metallic Mineral: Iron, manganese, copper, bauxite, etc.
(ii)Non-Metallic Mineral: Petroleum, coal, natural gas, mica, limestone, etc.
The two features of three mineral belts of India are as follows :
•The North-Eastern Plateau : It includes Chota Nagpur plateau, Orissa plateau and Eastern Andhra plateau. This belt contains rich variety of ferrous minerals which are used in metallurgical industries like iron-ore, manganese, mica, bauxite, limestone and dolomite: The region is also rich in uranium, thorium, chromium, sillimanite and phosphate. The abundant coal reserves in the Jharkhand, West Bengal and Orissa favours the development of iron and steel plants.
•South-Western Plateau : This belt extends over Karnataka plateau and adjoining Tamil Nadu plateau and rich in metallic resources. Iron-ore, manganese and bauxite have rich reserve, though lacking in power reserve (coal).
•North-Western Region : This region extends from the Gulf of Khambhat in Gujarat to Aravali range in Rajasthan. Copper, zinc, lead limestone and mica are the major mineral resources found in this region. This region is also rich in natural gas and petroleum.

Q.19. Describe any five characteristics of the ‘Gujarat Industrial Region’.
Ans. The five features of the following industrial regions are :
(i)The nucleus of this region lies between Ahmedabad and Vadodara, though this region extends upto Valsad and Surat in the South.
(ii)The development of this industrial region is mainly due to the location of the cotton, textile industry since 1860s.
(iii)After the decline of cotton textile from the Mumbai region, the region has double proximity of raw material and market.
(iv)The discovery of oilfields led to the development of a variety of petrochemical industries in Ankleshwar, Vadodara, and Jamnagar.
(v)Petroleum refinery at Koyali provided raw materials to a host of petrochemical industries.

Q.20. Describe the composition of exports and imports of India.
Ans. The composition of export and import trade of India are :
•Composition of Export: Manufactured and agricultural products dominate the export trade of India. Manufacturing sectors alone accounted for 78 percent of the total value of export in 2000-01. Commodities of these two groups constituted 91.5 per cent of the total value of export from India. Among the manufactured goods, jewellery and gems, ready made garments are important as they account for 16.6 per cent and 12.5 per cent the total value of exports. Cotton yarn, machinery drugs, chemical and equipments, leather and leather products, electrical goods and handicrafts, among agricultural products, marine products including fish and fish products are top for 3.1 per cent of the total values of the export. Other important exported items are cereals, tea, oil, cake, spices, cashew nuts, coffee and tobacco.
•Composition of Import: Imports are made to meet the demand of domestic consumption, investment, production and inputs for export goods. Fuels, raw material and minerals heavily dominate India’s import trade. These two groups account for 63 per cent of the total import of the country. Petroleum and petroleum products consists nearly one-third (31 per cent) of the total import bill of 2000-01. Coal 2.2 per cent, pearls and semi-precious stones 9.6 per cent, Gold and silver 9.3 per cent. Other important items are iron and . steel, ferrous metals and optical goods, transport equipments electrical machinery and appliances and project goods are other important imported goods.

Q.21. On the given outline map of the World, following five features are shown. Identify these features and write their correct names on the lines marked near each feature:
(i)Mega City.
(ii)Famous waterway of Europe.
(iii)Major sea-port.
(iv)The largest country of South America.
(v)Area of extensive grain farming. 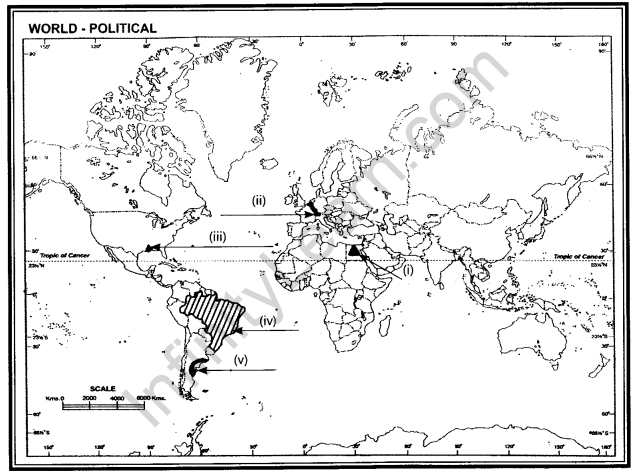 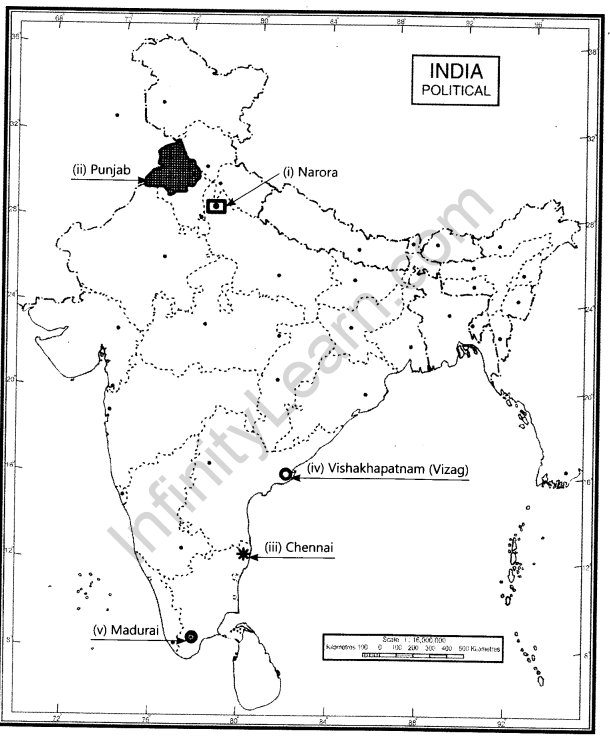