Question 2.
Under which dynasty did Delhi become the capital? When did it become an important commercial centre?
Answer:

Question 3.
The transformation of Delhi into a capital that controlled vast areas of the subcontinent started with the foundation of the Delhi Sultanate in the beginning of the thirteenth century. Take a look at Table 1 again and identify the five dynasties that together made the Delhi Sultanate.
Answer:

Question 4.
The Delhi Sultans built many cities in the area that we now know as Delhi. Map 1 shows the location of Dehli-i Kuhna, Siri and Jahanpanah. Now locate them on the map.
Answer:
Please see the map on page 48 and the shaded portion (squares). (see Map 1)

Question 5.
Name the Rajput dynasties that ruled during 12th century.
Answer:
Ananga Pala of Tomar dynasty and Prithiviraj Chauhan of Chauhan dynasty were important Rajput rulers during the 12th century.

Question 6.
Name the rulers of slave dynasty.
Answer:
Qutbuddin Aybak – military general of Muhammad Ghori established the Slave dynasty. He was followed by Iltutmish and Raziyya, the first woman Sultan and Balban.

Finding Out about the Delhi Sultans

Question 1.
What are sources of information about Delhi Sultans?
Answer:

Question 2.
Who wrote tawarikh? What did they write? ”
Answer:
The authors of tawarikh were learned men.

Major features of writers of history

Question 5.
Were there any other women rulers?
Answer:

From Garrison Town to Empire: The Expansion of the Delhi Sultanate

Question 1.
Why did the Delhi Sultans not expand their frontiers in the earlier phase of their rule?
Answer:

Question 2.
How did the territories of Delhi Sultanate expand from garrison town to empire? Explain the first phase of expansion.
Answer:
The expansion occurred during the reigns of Ghiyasuddin Balban, Alauddin Khalji and Muhammad Tughluq.

First Expansion:
The campaigns along the “internal frontier” of the Sultanate aimed at consolidating the hinterlands of the garrison towns. During these campaigns forests were cleared in the Ganga-Yamuna doab.

Question 3.
Explain the second and third phase of expansion?
Answer:
Second Expansion:
The second expansion occurred along the “external frontier” of the Sultanate.

Third Expansion:
By the end of Muhammad-bin-Tughluq’s reign, 150 years after humble beginnings, the armies of the Delhi Sultanate had marched across a large part of the subcontinent.

Question 4.
What is called a masjid? How is it used?
Answer:

Question 5.
Why did the Delhi Sultans build mosques all over the subcontinent?
Answer:
Delhi Sultans built several mosques in different cities. They wanted to show themselves as protectors of Islam and Muslims. Mosques helped in creating a sense of community sharing common belief and code of conduct. It was important as the Muslims i came from variety of backgrounds.

A Closer look: Administration and Consolidation Under the Khaljis and Tughluqs

Question 1.
How was the administration consolidated under Delhi Sultanate?
Answer:
Delhi Sultans required reliable governors and administrators. Rulers especially, Iltutmish favoured special slaves called ‘bandagan’ for this purpose. They did not appoint aristocrats or landed chiefs as governors.

Bandagans were trained for important political offices. They depended totally on their masters therefore, the Sultan could trust them.

The Khaljis and Tughluqs continued this tradition and raised people from humble birth to high positions. They were appointed as generals and governors. All this led to an element of political instability.

Question 3.
How did accession of a new monarch see conflicts between old and new nobility?
Answer: 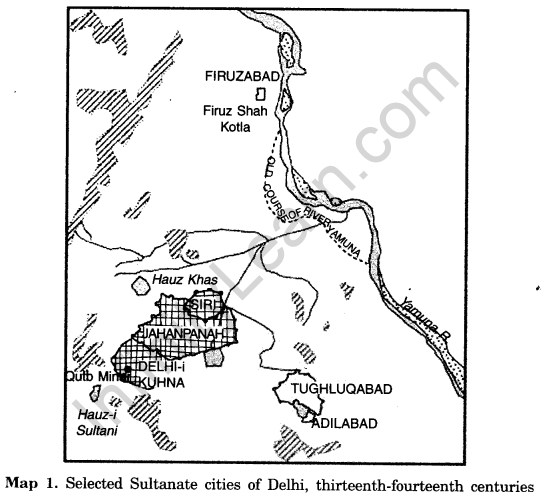 Question 4.
Why did Barani criticised Sultan Md. Tughluq.
Answer:
Ziyauddin Barani Criticised Sultan for his loss of political judgement and incapacity to rule. He was not in favour of certain administrative appointments made by Md. Tughluq like Aziz Khummar, a wine distiller, Firuz Hajjam, a barber, Manka Tabbakh, a cook, Ladha and Pira, gardener.

Question 5.
Give an account of iqtadars or muqtis.
Answer:
The Khalji and Tughluq monarchs appointed military commanders as governors of territories of varying sizes.

These lands were called iqta and their holder was called iqtadar or muqti.

Control over muqtis was most effective if their office was not inheritable and if they were assigned iqtas for a short period of time before being shifted.

Question 6.
How were the authorities of muqtis eroded?
Answer:

Under Alauddin Khalji the state brought the assessment and collection of land revenue under its own control.

Question 8.
How did large parts of the subcontinent remain outside the control of Delhi Sultanate?
Answer:

Question 9.
How did the Mongols force the Delhi Sultans to mobilise a big army?
Answer:

Question 11.
describe how the chieftains arranged for their defence.
Answer:

Sultanate under Muhammad Tughluq’s was in the early years. Mongol army was defeated and Md. Tughluq was confident of his armed strength, resources and planned to attack Transoxiana.

The important thing to remember is that Md. Tughluq was the first ruler who planned to capture Mongol territory. His measures were offensive unlike Alauddin’s defensive measures.

The Sultanate in the Fifteenth and Sixteenth Centuries

Question 2.
Briefly write about Sher Shah Suri.
Answer:
Sher Shah Suri (1540-1545) started his career as the Manager of a small territory for his uncle in Bihar and eventually challenged and defeated the Mughal emperor Humayun (1530-1540, 1555-1556).

Question 1.
Which of the following was NOT the king of the Rajput Dynasty?
(a) Tomaras
(b) Ananga Pala
(c) Prithviraj Chauhan
(d) Bahlul Lodi
Answer:
Bahlul Lodi

Finding Out about the Delhi Sultans

Question 1.
What was the language of administration under the Delhi Sultans?
(a) Urdu
(b) Persian
(c) Hindi
(d) English
Answer:
Persian

From garrison town to empire: the expansion of the delhi sultanate

Question 1.
The position of standing facing Mecca during namaj is known as
(a) Khutba
(b) Qibla
(c) Sijdah
(d) Kharaj
Answer:
Qibla

Question 4.
A fortified settlement with soldiers was
(a) hinterland
(b) garrison town
(c) jagir
(d) none of these
Answer:
garrison town

A Closer look: Administration and Consolidation under the Khaljis and Tughluqs

Question 1.
Which was NOT the kind of taxes during Delhi Sultanate?
(a) Kharaj
(b) Tax on cattles
(c) Tax on houses
(d) Bandagans
Answer:
Bandagans

Question 2.
Kharaj was a type of tax on
(a) houses
(b) cattle
(c) trade
(d) cultivation
Answer:
cultivation

The Sultanate in the Fifteenth and Sixteenth Centuries

Question 2.
State whether the given statements are true or false:
1. Delhi became an important city under the rule of Tomaras and Chauhans.
2. Minhaj-Siraj was in favour of Queen’s rule in Delhi.
3. Delhi’s authority was challenged by Mongols’ invasions.
4. The iqtadars were called Samantas.
5. Jalaluddin established the Lodi dynasty.
6. Dehli-i-Kuhna was oldest of four cities of Delhi and was established by Muhammad Bin Tughluq.
Answer:
1. True
2. False
3. True
4. False
5. False
6. True.

Question 3.
Match the contents of Column A with that of Column B: