Origin of friction
The following two factors are responsible for the friction :
1. Roughness of surfaces is the cause of friction. The roughness or irregularities of surfaces provide the interlocking between the two surfaces when the surfaces are in relative motion. Interlocking of the elevations and the depressions of the lower surface and bottom surface of the bodies are shown in (Fig. 7.01). When the body is pulled, elevations collide and friction provide.
2. Force of attraction between molecules in the lower surface and bottom surface of the body. It is called adhesive force. 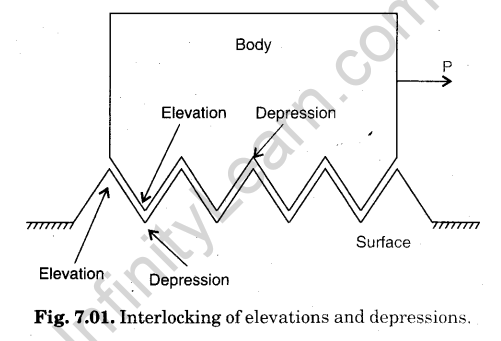 Friction is necessary
Friction plays an important part in daily life. In its absence, many acts may not be able to be performed. They are given below :

Friction is evil
Though friction is useful in many fields, it is harmful (evil) in the followings.
1. Due to friction between different parts of a machine, wear and tear of parts take place and excessive heat is produced. This reduces the life of the machine.
2. Unnecessary, expense of energy to overcome the friction. Hence, output is always less than input.

Reduction of friction
In cases where friction is taken as an evil, it is desired to reduce it. The friction can be reduced by following methods :

Incrasing friction
In cases where friction is necessary, it is desired to increase it. The friction can be in-creased by following methods (which are reverse of reduction methods).

Angle of sliding or angle of repose
Definition. It is the angle of inclination of a rough surface with horizontal, such that a body kept over it, just starts to sliding down.
Relation. Figure 7.04 shows a body of mass m and weight mg kept on a surface inclined at an angle θ with horizontal. 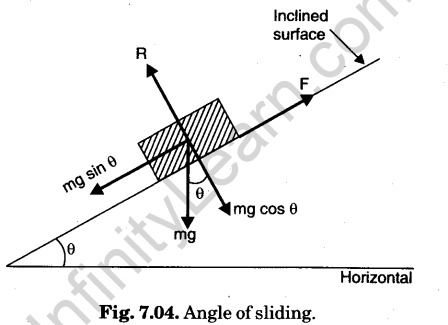 or tan θ = μ
Hence, tangent of angle of repose is equals to the coefficient of static friction.
(c) Application. Using an inclined plane with variable angle of inclination, coefficient of friction can be determined.