Aim
To find the value of v for different values of u in case of a concave mirror and to find the focal length. 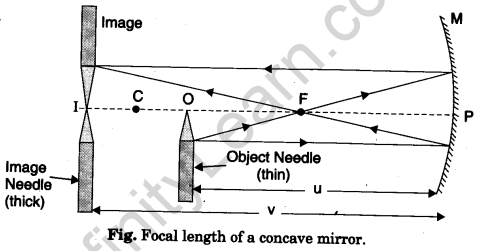 Calculations
Calculations of focal length by graphical methods
(i) u-v Graph. Select a suitable but the same scale to represent u along x’-axis and u along Y’-axis. According to sign conventions, in this case u and v both are negative. Plot the various points for different sets of values of u and v from’ the observation table. The graph comes out to be a rectangular hyperbola as shown in figure.
Draw a line OA making an angle of 45° with either axis (i.e., bisecting ∠Y’ OX’) and meeting the curve at point A. Draw AB and AD perpendicular on X’- and Y’-axes respectively. The values of u and v will be same for point A. So the coordinates of point A must be (2 f, 2 f) because for a concave mirror u and v are equal only when the object is placed at the centre of curvature.
Hence, u = v = R = 2 f 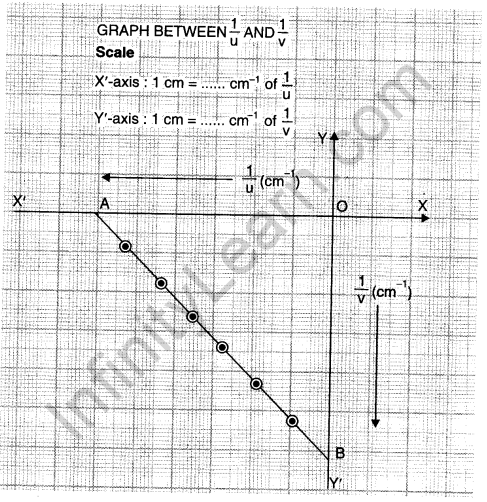 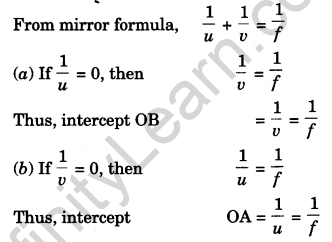 (iii) Another u-v Graph. Select a suitable but the same scale to represent u along X’-axis and v along Y’-axis. Mark the points at distances u1, u2, u3,…….. etc. along the OX’-axis
and the corresponding points at distances v1, v2, v3,…….. etc. along the OY’-axis for different sets
of observations from the table.
Draw straight lines joining u1 with v1, u2 with v2, u3 with v3 etc. These lines will intersect at a point K as shown in figure below. Draw KL and KM perpendiculars on X’- and Y’-axes respectively. 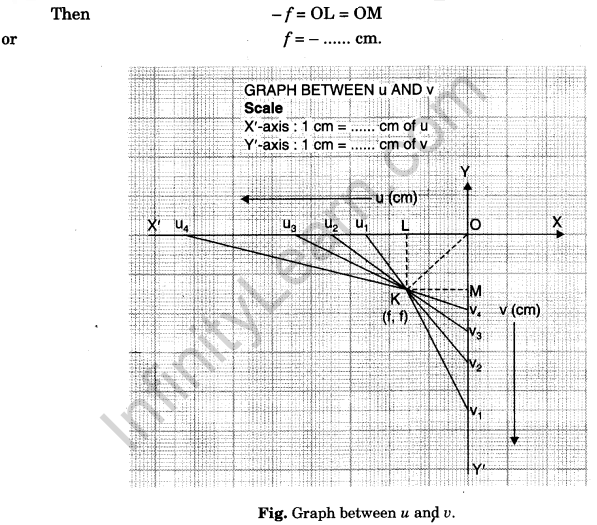 also satisfied by extreme sets (f,∞) and (∞,f) of u and v values. The straight lines corresponding to extreme sets intersect at a point (K) having co-ordinates (f. f). If set (u1 v1), (u2, v2),
satisfy the mirror formula then straight lines corresponding to these sets will also pass through the point K(f.f).
Hence, co-ordinates of the point K obtained from the observed sets of u and v values give value of f.

Note. It will be better to choose any four suitable sets of (u, v) values from the observation table. All the six sets of observations may complicate the graph.