Question 1.
What is the name of the undesirable plants that grow among the crops?
Answer:
Weeds

Question 4.
Name the chemicals that are used to remove weeds.
Answer:
Weedicides

Question 5.
Name a tool which is used for removing weeds and for loosening soil.
Answer:
Hoe

Question 6.
What is the process of loosening and turning of the soil called?
Answer:
Tilling or ploughing

Question 7.
What are the substances which are added to the soil in the form of nutrients called?
Answer:
Manure and fertilisers

Question 8.
What is the process of supplying water to crops at different intervals is called?
Answer:
Irrigation

Question 9.
What are the sources of irrigation?
Answer:
Wells, tubewells, ponds, lakes, etc.

Question 10.
What is the process of separation of grain from chaff called?
Answer:
Winnowing

Question 12.
Name the ideal months for the harvesting of rabi crops.
Answer:
March/April

Question 1.
What is a crop?
Answer:
Crop is the term used to describe a plant that is grown in a field on a large scale. For example, cereal crops, wheat crops.

Question 2.
What do you mean by produce?
Answer:
The products obtained from the crops are called produce.

Question 4.
Explain the term levelling.
Answer:
Levelling is the process of breaking down the larger lumps of soil, and then levelling them by using a leveller.

Question 6.
What is a plough?
Answer:
A plough is an equipment for ploughing. It is mainly made of a wooden shaft called a plough-shaft, at-tached to a triangular iron blade called ploughshare.

Question 7.
What is a cultivator?
Answer:
Cultivator is a farm implement used for stirring and pulverizing the soil for planting crops.

Question 8.
Explain the term transplantation.
Answer:
Some of the crops are first grown in the nurseries and then transferred to the main field. This process is known as transplantation.

Question 10.
What are weedicides? Give some examples.
Answer:
Weedicides are the chemicals that are used to remove weeds. Some commonly used weedicides are 2, 4-D and metachlor.

Question 1.
What do you mean by the term crop? Explain briefly the types of crops.
Answer:
Crop is the term used to describe a plant that is grown in a field on a large scale. For example, cereal crops, pulses and fruit crops.
The crops grown in India can be classified as kharif and rabi.
Kharif crops are sown in the rainy season by June/July and are harvested by September/October. Thus they are also known as summer season crops. For example, rice, maize, etc.
Rabi crops are sown in the winter season in October or November and are harvested by March/April. Thus, they are also called winter season crops. For example, mustard, wheat, potato, etc.

Question 5.
What do you mean by weeding? Why the process of weeding necessary? Name the methods applied for weeding.
Answer:
The undesirable plants that grow among the crops are called weeds. The process of removing these weeds is known as weeding. Weeds compete with the crop plants for nutrients and space. They grow much rapidly than the crop plant. So weeding is necessary.
Methods applied for weeding are as follows:

Question 2.
Why sowing seeds with seed drill is better than broadcasting?
Answer:
Seed drill sows the seeds uniformly at proper distances and depths, whereas broadcasting of seeds scatter them non-uniformly on the ground surface which are susceptible to be picked up by birds.

Question 3.
How can nitrogen be replenished in soil naturally?
Answer:
Through crop rotation with a leguminous crop the nitrogen can be replenished in soil naturally. The leguminous plants, like peas, beans, soybeans, peanuts, etc., have nitrogen-fixing bacteria in their root nodules. The nitrogen-fixing bacteria, viz., Rhizobium, fixes atmospheric nitrogen (N2) into ammonium (NH4+) which is used by the plants.

Question 5.
What is biological control of pest? How is it beneficial?
Answer:
Method of controlling pests including insects, mites, weeds, etc., with the help of other living organisms are known as biological control of pest. The controlling agents are very much particular of their host pest. For example, lady bugs controls aphids, mites, scale insects, etc., which harm the crops. A wasp eats up bollworms or other caterpillars on cotton plant.
Benefits of biocontrol agents are:

Question 1.
Rajan felt worried about the condition of water scarcity in his village during the cropping season. He went to Ministry of Agriculture and Farmers Welfare of his area to get the solution of this problem. There he came to know about effective method of irrigation and drought resistant varieties of crop.
He requested the head of department of the ministry to arrange some workshop on this topic to educate the farmers in these methods.

(c) Organic farming uses all the natural ways to provide nutrients and to get rid of the pests. So it reduces the harmful effects of pesticides and fertilisers on human beings.
(d) Krishi Vigyan Kendra shows concern about the growing use of pesticides, fertilisers, etc., and their adverse effect on human health. It is spreading awareness amongst farmers about eco-friendly ways of cultivating crops.

Question 1.
Sow some seeds in the soil and arrange to water them by drip irrigation. Observe daily.

Answer:
Yes, it can save water. The drip system is a better manager of water.
We observe that seed begins to germinate.

Question 2.
Collect different types of seeds and put them in small bags. Attach these bags in a herbarium file and label them.
Answer:
Do it yourself.

Question 3.
Collect new agricultural machine pictures and paste in a file with their names and uses.
Answer:
Do it yourself.

Question 4.
Project Work
Visit a farm, nursery or a garden nearby. Gather information about
(i) importance of seed selection.
(ii) method of irrigation.
(iii) effect of extreme cold and extreme hot weather on the plants.
(iv) effect of continuous rain on the plants.
(v) fertilisers/manure used.
Answer:
(i) Good quality seeds are essential to grow a strong and healthy crop. Also type of fruit or final pro¬duce desire depends on seed selection.
(ii)

(iii) In extreme cold weather, water inside the plants will freeze and cells will burst from the expansion of water. Ultimately the plants will die. In extreme hot weather, the plant will loose more water than it absorb. So plant will die of wilting.
(iv) If plant grows in well drained field, there is no problem, as there is no water logging. In case if continuous rain causes water logging, the root system gets damaged, as the rain blocks the pores of soil and the root of plant will not be able to take proper oxygen. So it will cause death of the plant. The continuous rain may also affect the leaves as they get torn and damaged.
(v) Do it yourself.

I. Multiple Choice Questions (MCQs)
Choose the correct option.
Question 1.
The branch of science that deals with growing plants and raising livestock for human use is
(a) agriculture
(b) horticulture
(c) pisciculture
(d) animal husbandry

Question 2.
Products obtained from the crops are called
(a) yield
(b) produce
(c) crop
(d) fertilisers

Question 3.
The practice of growing two or more dissimilar crops in the same field one after another is
(a) crop rotation
(b) tilling
(c) plantation
(d) weeding

Question 4.
The unwanted plants that grow along with the crops are called
(a) fertilisers
(b) manure
(c) weeds
(d) kharif crops

Question 6.
Which of the following is an example of rabi crop?
(a) Potato
(b) Onion
(c) Jute
(d) Pulses

Question 7.
The method of loosening the soil is called
(a) harvesting
(b) ploughing
(c) levelling
(d) threshing

Question 9.
Which of the following is not a kharif crop?
(a) Paddy
(b) Maize
(c) Groundnut
(d) Peas

Question 10.
Which of the following are agricultural implements?
(a) Seed drills
(b) Silos
(c) Harrow
(d) All of these

Question 11.
The process of beating out grains from the harvested wheat crop is called
(a) beating
(b) crushing
(c) threshing
(d) harvesting

Question 13.
Which of the following is not provided to the soil by a chemical fertiliser?
(a) Nitrogen
(b) Humus
(c) Potassium
(d) Phosphorus 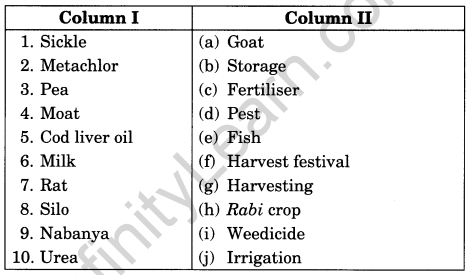 IV. True or False
State whether the given statements are true or false.
1. Rice is a kharif crop.
2. Jute is a rabi crop.
3. Storage of grains is not an agricultural practice.
4. Process of levelling involves breaking down the larger lumps of soil.
5. Levelling prevents soil erosion.
6. The method of loosening the soil is called weeding.
7. Putting some dried neem leaves in the drum containing grain prevents the attack by insect pests.
8. The irrigation process destroys the soil.
9. Kharif crops are grown during rainy season.
10. Peas are not rabi crops.
11. The first agricultural task is the preparation of soil.
12. Combines are used for harvesting only.
13. Loosening of soil allows the roots to breathe easily.
14. Chemicals used to control rat and insects are known as pesticides.
15. Drip irrigation system is the economical method of irrigation.
Answer:
1. True
2. False
3. False
4. True
5. True
6. False
7. True
8. False
9. True
10. False
11. True
12. False
13. True
14. True
15. True