Q.2. Define Transhumance.
Ans. The vertical movement or migration from mountainous region to valley, due to the change of season, mainly done for live stocks. .

Q.8. Name the three approaches introduced in 1970s in human geography. State the main features of each approach.
Ans. The three approaches introduced in 1970’s in human geography are :
(i)Welfare Approach : The influence of capitalism in the world is constantly on the rise. On account of capitalism various types of difference-economic, social and others-among groups of people are on the rise. In order to find solutions to these inequalities the welfare approach was born. David Harvey and D.M. Smith are proponents of this thought.
(ii)Behavioural Approach: The limitations placed by positivism led to reactions against it. This ‘approach’ is mainy borrowed from psychology. The Behavioural approach was an antithesis of positivism in which the cognitive power of human beings was emphasised. Woolpert and Oloson are the staunch supporters of Behavioural Approach.
(iii)Radical Approach: The radical school of thought employed Marxian theory (welfare) and explained the basic cause of poverty, deprivation and social inequality. The contemporary social problems were related to the development of welfare approach.

Q.12.Why Slavery was the lucrative business in the 17th century? Why it was curse on human value?
Ans. Slavery was a curse and bane in the world. Slavery was the most lucrative business during seventeenth century because it gave high returns without any investment. Mainly African war captives were transported to work in plantations. All human beings in this world should live with dignity and should be treated with equality. They should not be discriminated on the basis of colour, caste and sex. It is the duty of human society to create and provide equal status, and respect their self esteem and one should be bold enough to raise their voices against it locally or globally.

Q.13. Why is the development and utilisation of non-conventional sources of energy becoming increasingly important? Explain your answer with suitable examples.
Ans. Coal, mineral oil and nuclear resources are exhaustible in nature. Their reserves will come to an end. In this way, efforts to research and develop non-conventional renewable sources of energy have already started.
Light from sun, tidal waves, winds geothermal energy are non-conventional sources of energy. The non-conventional sources are cheap and can be tapped easily. They are pollution free as they do not have smoke or ash when used. They have no environmental hazards.
•Solar Energy. India is a tropical country so sunlight is abundantly available in all the parts of the country except north-eastern parts. Solar energy is used for cooking, water heating and space heating. Solar cookers, water pumps, road lights, telephones etc., are being operated by solar energy.
•Wind Energy. Tamil Nadu, Gujarat, Maharashtra, Orissa are using wind energy. Efforts are being made to develop wind generators, wind mills, battery charging system. Asia’s largest wind form of 10 mw has been commissioned at Khambhat in Gujarat. Many wind pump have been installed for drinking water and irrigation.
•Geothermal Energy. Development activities related to cold storage unit and 5 kw power plant both based on geothermal energy at Manikaran (H.P.) are in full progress.
•Biogas. It is most important renewable sources of energy in rural areas. As a by product a biogas plant produces enriched fertiliser. It is used as cooking fuel and also used for lighting and power generation.

Q.14. What are urban settlement? Explain any four major problems related to urban settlement in the world.
Ans. Urban Settlement. The settlement are compact places having functional structures. The residents are employed in secondary and tertiary economic activities.
The four major environmental problems related to urban settlements in developing countries are as follows:
(i)Huge disposal of waste products by the large number of urban population, mainly in Asian and African countries.
(ii)Disposal of wastes products into the water also create acute scarcity of potable water.
(iii)Mass use of non-commercial fuels in the domestic sector create a major environmental problem.
(iv)The haphazardly growth of slums on the government land not only affect the urban environment, but also affects the scenic beauty of the city or urban areas.
(v)The open disposal of industrial wastes without any treatment make surroundings stinky.
(vi)The huge concrete structures constructed to accommodate the mass population, created a very conducive role in to heat islands. (any four)

Q.15. What are the causes of deterioration of water quality in India? Explain how we can conserve our water resources?
Ans. The main causes of deterioration of water quality in India are :
(i) Disposal of industrial effluents into the rivers without primary treatment is the main reason for the decline in the quality of water.
(ii)The indiscriminate use of water by increasing population and its various socio-cultural activities led to the decline in the quality of water.
Following measures are taken for the water conservation :
(i) Construction of Dams on Rivers. The maximum capacity of storing water at present, under construction and under planning of dams in India can be 4 crore hectare metres, which is less than the demand of water. Therefore, the need is to construct more dams on rivers for increasing the capacity of storing water.
(ii) Use of New Techniques of Irrigation. A lot of water is wasted in flood and improper irrigational methods. It is necessary to adopt new techniques of irrigation, such as sprinkling, fountain and dip. These techniques not only save water but also help in maintaining the soil fertility.
(iii) Recycling of Polluted Water. Today the technology has developed to make polluted water consumable. Three R’s should be compulsory, these are ‘Reduce’, ‘Recycle’ and ‘Reuse’. These techniques are helpful in controlling growth of weeds and increased yields

Q.17. Describe in brief about the different trends of population growth in the world by giving suitable examples.
Ans. The five different trends of population growth in the world are as follows :
•In the initial phase of human history, the human population growth was at a snail speed. The hazardous climatic conditions and the migratory character and the poor nourishment were all unfavourable for the growth of population. After the last Ice age about 10,000 years ago before birth of Christ only 1 lakh to 10 lakh people were in the world.
•During the period of agricultural revolution man learnt to grow crops and live in settlement often on river banks. Availability of food gave some stability to man, death caused by hunger declined. Nutrition in food and other comforts i.e. medical facilities, sanitation etc. helped them to live longer life. It was during this period the early Greeks began to differentiate between the inhabited and uninhabited world. In Ecumene, agriculture was die main occupation. It occupied only just 5-10 per cent of the earth’s surface, about 8,000 to 12,000 years ago. In the first AD the world’s population was estimated at around 25.6 crores.
•The dawn of industrial revolution is attributed to 1750 AD. Before this period new and unknown lands were discovered in the course of voyages and discoveries. At the beginning of me industrial revolution, the population of the whole world was around 50 crores.
•The development in the means of transport such as in place of human and animal power.
Steam engine and mechanisation received great encouragement. Development in the transport made, the mobility of people easy from one place to other. The population growth in the 1930 was 2 billion. .
•Many demographers have presented their own estimates from time to time. According to one estimate, the total population of the world in 2010 will be 6.8 million, in 2020 about 8 billion and in 2200 it will cross 10 billion.

Q. 19. Describe five major basis of international trade in the world.
Ans. The exchange of goods and services between two countries is called international trade. The basis of international trade in the world are :
Differences in Natural Resources. The variation in the physical features and climatic conditions leads to variation in the availability of natural resources in different countries of the world. No country is self-sufficient in fulfilling the requirements of its people. So the countries having goods and resources in surplus, always exchange with those which lack these. Japan and UK are lacking in mineral resources. They import mineral resources from countries like India by exporting manufactured goods and services.
Disparities in Economic Growth. There is a vast disparity in the level of economic development in different countries of the world. In some countries like India and Bangladesh primary activities still provide occupation to major population, while a less number of people are engaged in secondary and tertiary sectors. Whereas reverse is the case with countries like USA and UK. So these countries mainly export finished products and services to developing countries where technological and industrial development is very low.
Political Relations. Countries like India and Russia have good relations, which has encouraged exchange of goods and services in comparison to Russia and USA. India and Pakistan’s strained political relationship discourages trade relation.
Cultural Disparities. Some countries specialise in production of certain goods due to their rich cultural heritage. Handicrafts and hoisery goods in India, carpets in Iran, siik in China and toys and electronic goods in Japan are such examples. These goods are in great demand in the international market and they encourage international trade.
Scarcity of Goods. There is not even a single country in the world, which is self reliant and does not depend on global market for its needs. Japan and Britain are deficient in mineral resources, and are entirely dependent on imports to fulfil their industrial needs.
Trade Policy. The trade policies of different countries affect international trade. India has imposed heavy import duty on certain finished goods to restrict foreign goods and encourage domestic industries. (any three)

Q.21. On the given outline map of the world, following five features are shown. Identify these features and write their correct names on the lines marked near each feature.
(i)Largest country of South America in Area
(ii)A Mega City of Egypt
(iii)A Major Airport of Germany
(iv)Major sea port of Australia
(v)An Area of Subsistence gathering 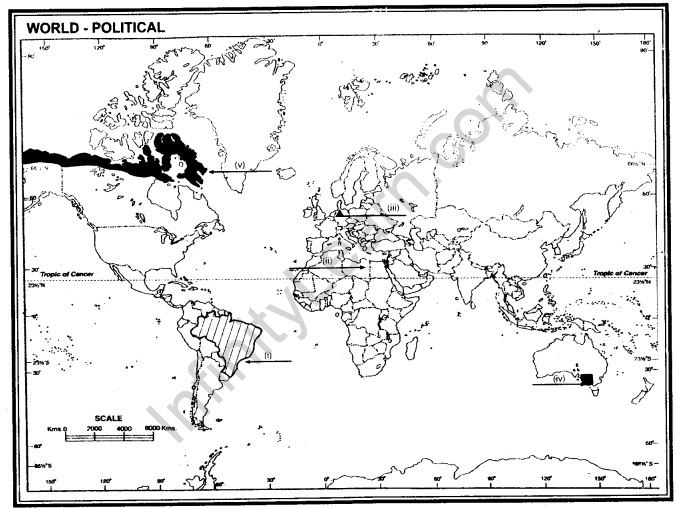 Q.22. On the given outline map of India, locate and label the following with appropriate symbols:
(i)The state having the largest area
(ii)The oil refinery of private sector in Gujarat
(iii)Metropolitan city of Kerala
(iv)Least populated state of India
(v)Wheat producing states
Ans. 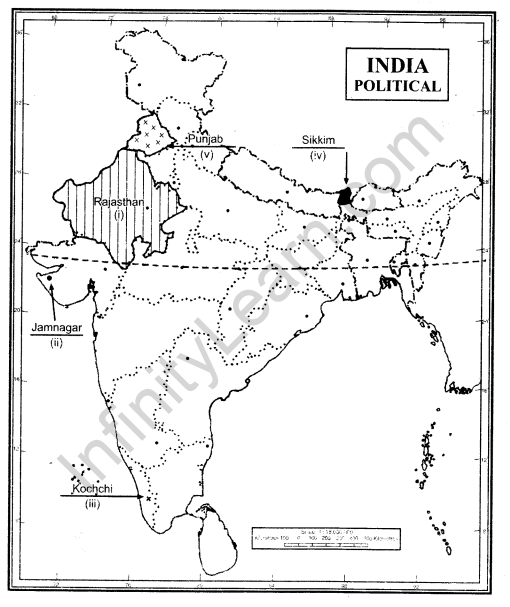